While clearly a dated set, easily pinned to the late 80's, this was the first of the NFL Pro Set and has long been a favorite among collectors. Here are the cards that make up the San Diego Chargers set in the '89 series.

While clearly a dated set, easily pinned to the late 80's, this was the first of the NFL Pro Set and has long been a favorite among collectors. This set, which ran from 1989 - 1991, was licensed to Ludwell Denny through an agreement with the NFL. That being the case, these cards were designated as "The Official NFL Card" through their thirteen year run.

Along with the brand Score, the NFL Pro Set is what ushered in the modern era of football cards and, like Topps, would issue rookie cards of notable draft picks. Yet it was this NFL Pro Set that initially featured much more dynamic and colorful photography on their cards, again, adding to the longstanding charm of this first Pro Set contrasting with other brands in these years of the resurgence in collecting football cards. Notable rookies in this '89 set are Troy Aikman, Jeff Lageman, Barry Sanders, Deion Sanders and Derrick Thomas.

The 1989 San Diego Chargers succumbed to a 6-10 season. This was the season we suffered Jim McMahon after trading with Ditka and the Bears, when he would bat .250 for us, going 4-8 through the games he would start. The Chargers would finish last in the AFC West this year, a year when San Diego would finish in fifth place, behind, in descending order: Denver, Kansas City, Los Angeles and Seattle.

On the Wikipedia page for this 1989 San Diego Chargers team, there is the unforgettable note:

During the season, the Chargers started playing a non-disco cover version of their fight song, "San Diego Super Chargers."

The disco version, perhaps of interest, would ultimately be brought back into circulation after, Wikipedia informs me, local San Diego producer, Bo Donovan, would update the disco version, later that year ('89).

Perhaps it was the combination of McMahon, the lack of disco, and possibly even the phasing out of other illicit behaviors that further contributed to the downhill slide this year? Hard to say.

Never mind all that, we would send both Leslie O'Neal and Lee Williams to the Pro Bowl this year, both included with great cards in the set below. 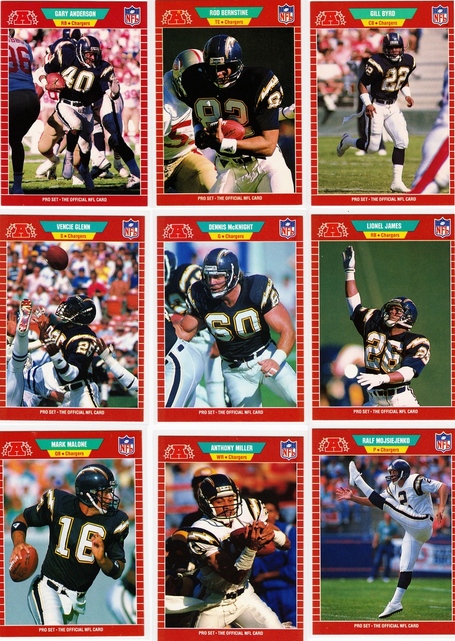 These are the first nine cards in the set, #'d 356 - 364. Of these, the Vincie Glenn and Ralf Mojsiejenko cards are killing it. Mark Malone was a local, born and raised in El Cajon, and here's a high-five back to you, James, one of my personal all-time favorite Chargers. 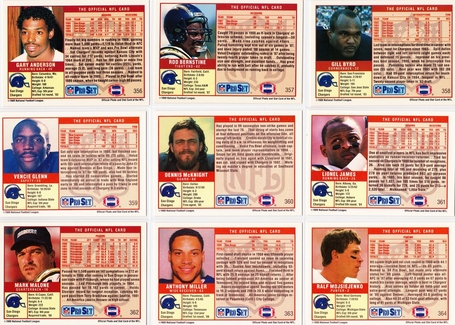 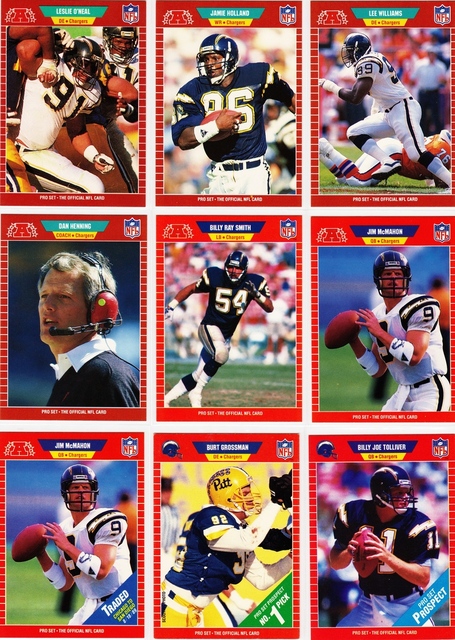 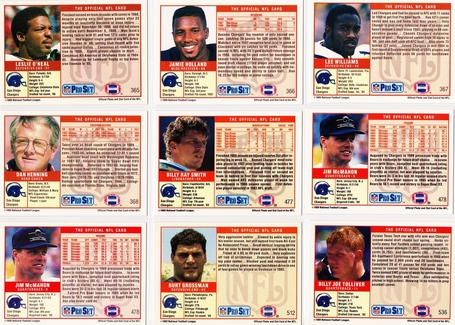 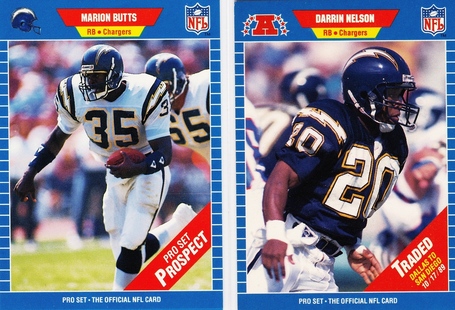 The final two "official" cards in the Chargers set within the greater NFL Pro Set for the year, Butts and Nelson.

Dan Fouts would also be included in the 1989 NFL Pro Set, but not as a player. Here's his "CBS Sports" insert card, yet he's not quite relegated to the suit of a TV analyst: 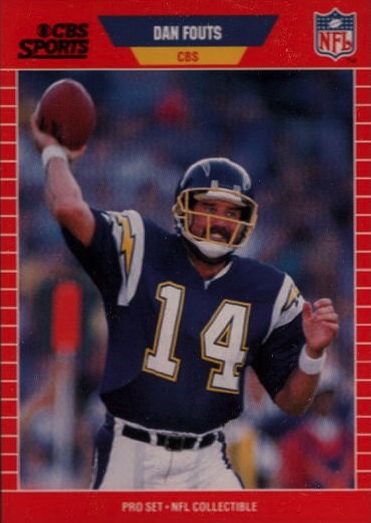 For as dated as this set looks now, what with it's Max Headroom side panels and plain five-color design, it's quite a storied and collector-favorite set.

Those interested, if you watch for it on Ebay, the complete set of 560 cards can be had for anywhere between $10 and $20, more if you want to chase the 30 additional cards that make up the "Announcers" or "Broadcasters" subset.