Two weeks in, it would appear the new coaching staff has done all of the little things to help San Diego Chargers QB Philip Rivers return to his previous form as one of the league's best quarterbacks.

For anyone who enjoys quarterback play, the last two years of what Philip Rivers has produced have been.... not good.

For two years now, Rivers wasn't the same guy and you could tell. Whether it was him feeling phantom pressure, or trying to do to much by forcing the ball into double coverage, or just flat out making dumb throws.... something was wrong with our beloved quarterback.

There was talk during the preseason that the 2013 San Diego Chargers would continue to use some of the plays and passing schemes that the team ran under Norv. Did Mike McCoy say that? Sure. Does that make any sense? Of course not. Mike McCoy's scheme (very different from Norv's) got him the Head Coaching offer, while Norv's got him a boot mark on his way out the door.

What I did during the Eagles game is chart every throw Rivers made. Before I tell you the numbers, I'll give a brief explanation of each type of throw first. Generally speaking, there are there different types of drops for a quarterback. There's a three-step drop, which usually involves hitting a receiver on a quick slant/out route, a "stick" route (the route we see Gates running over the middle), and quick fades.

There's a five-step drop, which sounds like it's for deeper routes, but it's not. This is usually your 8-10 yard curl routes, all your intermediate crossing routes, and basically all routes between 8-15 yards, aka the majority of routes the Chargers run.

Finally, the seven-step drop, which is mostly off of play-action where you're running deep combination routes that need to develop (longer comeback routes and deep post routes). This is what was a staple of the offense last year.

Now that you're aware of that, here's what happened on Sunday:

Last year Rivers had the highest completion percentage in the NFL when getting rid of the ball in 2.5 seconds or less. Basically, he processes defenses quickly. McCoy and Whisenhunt have decided to play to his strengths, unlike last year's coach. It's safe to say that there's not much of Norval's influence on this offense.

Where the difference is between this year's offense, and last year's offense, is rhythm. What Rivers was asked to do last year is heave it down the field relentlessly. What he's asked to do now is take what the defense gives him. Not only that, but offensive coordinator Ken Whisenhunt allows him to make some easy "confidence builder" throws. These things matter. 4 of his 5 first throws were short, easy, confidence-builders. He threw 2 to Woodhead, 1 to Gates on a short crosser, and a curl route to Vincent Brown.

Now that Rivers has gained some confidence, you start to see the great player come out in him. You see him stepping up in the pocket, on time with the football, putting the ball where only his receivers can catch it, and hitting them in stride. What's the result? 76.6% completion percentage on 47 passes. Unheard of. The little things that are helping Rivers are the same things that were ignored in last year's offense.

Another big difference? Getting the offense to the line quickly. This may sound simple, but it didn't happen last year. This year, Rivers gets to the line with ample time to read the defense, survey what he sees, and if he doesn't like it, check to another play. The Chargers ran 84 plays on Sunday, and I'd say Rivers audibled about 25% of those to a different play with a better chance of success.

You can tell Rivers knows where he's going with the ball. Everything was sharp against the Eagles, I think there were only two or three "bad" throws. Other than that, he was vintage.

I'm sure this may come off as very "homerish" to some, but I'm calling it how I see it, Rivers truly has "bought into the scheme" like head coach Mike McCoy preaches after every press conference. Still don't buy it? Look at how he's improved when throwing the ball under pressure from this year to last year. As we've stated over and over, Philip was seeing ghosts in 2012, and it affected him. This year, he's hanging in the pocket, ala Rivers '09 when he spoiled us, and he's making throws that have you just nodding your head, saying "Yeah, he's back."

Against the Eagles, Rivers was 21-27 for 220 yards when he was under pressure. He trusts his line, he trusts his receivers, but most of all, he trusts himself again. Let's highlight some of the "wow' throws.

Tight Coverage. This was off a three-step drop. After Rivers held the safety with his eyes to the middle of the field, he drops an absolute gem of a pass to Malcom Floyd for 31 yards. It doesn't get prettier than this. 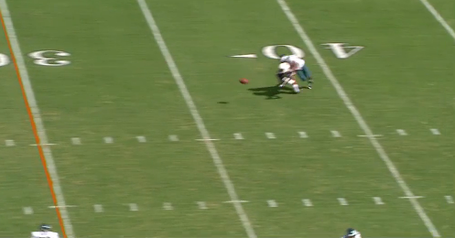 3rd & 8. The Eagles blitzed six, Rivers climbs the pocket and throws the ball low and away where only Keenan Allen can catch it for a huge 3rd down conversion. This drive eventually ended with a touchdown. 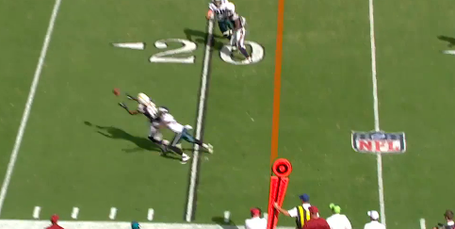 Press man coverage, the corner is all over Vincent Brown. Rivers throws the curl before Brown is out of his break, to the outside shoulder, making it an impossible play for the corner. This is an often-overlooked throw that is much harder than it seems. These throws are how you stay ahead of the chains and into 3rd & short situations.

3rd and 7. Notice the corner has slipped, that's because he's still coming out of his break, and the ball is already there. This is a 4th quarter throw that so many thought Rivers couldn't make anymore. Huge play here by Rivers after looking off to the left and coming back to Allen over the middle. 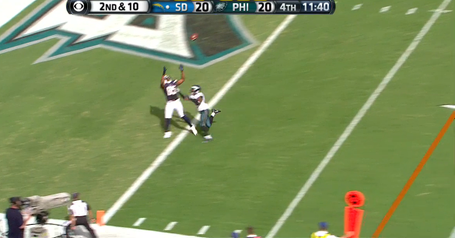 This one hurt, admit it. The only thing Rivers didn't do here was catch it. The Eagles again brought six defenders, and all Rivers did was hit Gates in the hands. This'll be a touchdown more often than not. Beautiful throw under pressure.

I could show you about 20 more, but I think you get the point. This offense has been impressive, and Rivers has a whole heck of a lot to do with it. Things are starting to click and it's fun to watch. When I picked this team to win as many games as I did, it was with Rivers in mind running this very system.

The Chargers have scored on a league high 50% of their drives. Two games or not, that's impressive. That just doesn't happen by chance or luck. It might seem overly optimistic to credit Rivers as much as I have, but it's hard to turn a blind eye to his performance so far.