Report: D.J. Fluker took money from agents while in college

The San Diego Chargers first round draft pick, D.J. Fluker, is in some hot water after reports surfaced that show him and his family taking money from sports agents while attending the University of Alabama.

Share All sharing options for: Report: D.J. Fluker took money from agents while in college

Manti Te'o had the "fake girlfriend hoax", Keenan Allen posted a picture of himself online wearing a Raiders hat, and now a third San Diego Chargers rookie seems to be in some hot water for something that probably won't actually affect his NFL career.

That doesn't sound good. Then again, you can't say D.J. didn't warn us: 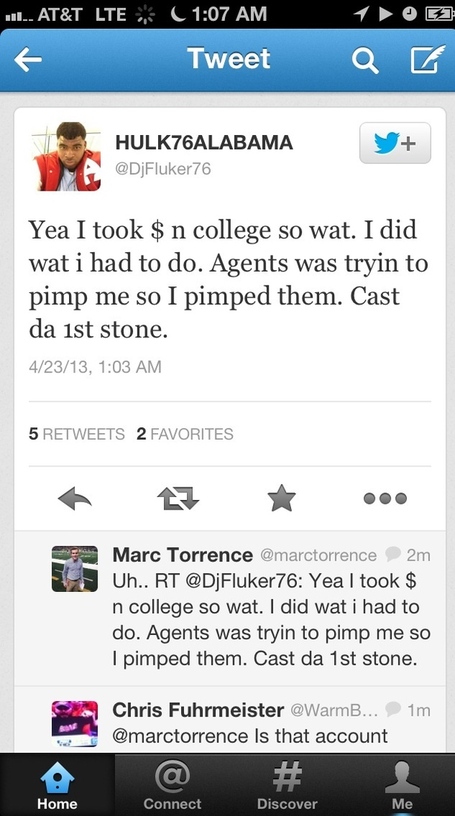 All told, the records show agents and financial advisers moved at least $45,550 to Davis between September 2011 and December 2012. During that same timeframe, records also show at least $12,700 in cash, airfare, living expenses or other receipts moving from Davis to the five players. In addition to that amount, Yahoo Sports also obtained a line-item invoice of 49 transactions from February 2013 that Davis emailed to Fluker's onetime financial adviser Hodge Brahmbhatt. Within the email, Davis listed $33,755 in expenditures under the subject line "D.J. Fluker Invoice."

Nope.....that is definitely not good.

Yahoo Sports authenticated multiple transactions tying Fluker to Davis and others, including cash transfers, hotel stays, furniture, airline flights and other expenses. The records also included a pair of invoices - one submitted to Davis by the mother of an Alabama teammate for monies that had been spent on Fluker's mother, Annice; another sent from Davis to Fluker's onetime financial adviser Hodge Brahmbhatt.

I know. You're sitting there saying "So what? So, Alabama loses a championship banner and nobody cares." Right? Well, maybe.

Terrelle Pryor served a 5-game NFL suspension due to improprieties in the Ohio State scandal. FWIW

That's an excellent point. The NFL might want to make an example out of D.J. Fluker to keep sports agents from trying this same sort of scheme in the future. I guess we'll have to wait and see.