A mostly new coaching staff learns the first truth about this Chargers roster... they're not good enough to beat a quality team like the Houston Texans making mistakes along the way.

Well, the offseason wait was worth it, wasn't it? All it took was 3 and 1/2 hours to make me wish I'd invested in an athletic cup, so that it wouldn't hurt as bad when the Chargers decided to kick me in the nuts.

Houston is the better team, and after about 35 minutes of lousy play, the Texans awoke from their summertime siesta and played like it. On the other hand, the Chargers played like a team that didn't expect to get out to a 28-7 3rd quarter lead, and wasn't sure what to do with it.

Along the way to blowing that lead, some of my thoughts about this team were confirmed, among them:

On with the grades...

Here was Philip Rivers' stat line in building a 28-7 lead: 65% completed, 187 yards on 20 attempts (9.35 YPA), 4 TDs, and no turnovers. He was on-time and accurate with most of his throws. Best of all, he hadn't come close to throwing an interception.

And then, we got the disaster machine we've seen far too much of during the last 2 seasons: 11% completed, 8 yards on 9 attempts (0.88 YPA), and a Pick 6 - which was mostly a great play by ILB Brian Cushing. However, some of this came from forcing downfield plays when shorter (and better) options were available. If the Chargers are going to beat quality teams, Rivers cannot continue to make mistakes in 4th quarter situations.

Running Backs: B minus

The running game featured a similar Jekyll and Hyde appearance. In the 1st half, Ryan Mathews totaled 47 yards on 11 touches (10 rushes for 33 yards and a 14 yard TD catch), while Ronnie Brown added 22 yards on 3 carries, and Danny Woodhead added 14 yards on 2 catches. Not spectacular, but effective.

In the second half, the backs were limited to a total of 6 carries, for 7 yards (1 carry for 2 yards went to Le'Ron McClain), and 3 additional receptions for 32 yards. Combined. In pass protection, the coaching staff certainly prefers Brown over Mathews and Woodhead, with the downside being his inability to make big plays with the ball. Also note: the longest rush was 18 yards, by the QB in the 1st half.

The receivers were definitely a mixed bag. Oddly enough, Floyd's 47 yard catch was his only catch on 5 targets. As a group, none of the receivers were able to catch more than 50% of their targets. The most targeted WR was Eddie Royal (6), whose 3 receptions resulted in 2 TDs and 1 early 1st down for 24 total yards. Royal also had a killer drop in the 4th quarter that would have extended a Chargers' possession. WR Vincent Brown had 2 catches, 1 of which was a great catch–and–run TD. TE Antonio Gates managed 2 (4) catches for 49 yards, but likewise had a big drop in the 3rd quarter — albeit against good single coverage.

One last point on the TEs: neither John Phillips nor Ladarius Green had a strong run blocking performance, but at least Green has the possibility of generating big plays in the passing game, while Phillips is a functional outlet.

LT King Dunlap allowed an early sack to OLB Whitney Mercilus, but Dunlap otherwise generally held his own. Some of that success was thanks to superb help from LG Chad Rinehart, who had the best game of the group. Rinehart and C Nick Hardwick had a solid game picking up stunts and blitzes, and generally gave Rivers space to step up in the pocket. On the right side, RG Jeromey Clary and RT D.J. Fluker drew the brutal opening day assignment of DE J.J. Watt, and Watt tortured both players with his speed and strength.

Oddly enough, the Chargers rarely ran right — which they did well all preseason — which put Clary and Fluker in the position of showcasing all their weaknesses and little of their strengths. Running left also showed Dunlap has issues getting low enough to drive defenders off the ball.

Of all of the units, this for me was the most disappointing. DE Corey Liuget was handled most of the night, and especially by LT Duane Brown. When moved to the left side, he didn't muster much push, and really placed little pressure on the pocket until the 4th quarter. The same goes for DE Kendall Reyes, who was mostly invisible. DT Cam Thomas was OK on the nose, but was too often moved aside by C Cody Myers. Some of this, especially in the second half, can be attributed to fatigue (see Graph of the Game below).

As a group, the DL combined on 10 tackles, and Thomas corralled the tip drill INT caused by OLB Jarret Johnson.

This group had 3 exceptional efforts — from OLB Jarret Johnson, ILB Donald Butler, and OLB Dwight Freeney — and some otherwise middling and poor efforts.

Freeney accounted for a half sack and several additional pressures. He was also solid against the run. Johnson also accounted for a sack, 1 tackle for loss, got a deflection which turned into an interception and continued to set the edge as well as any OLB in the league right now. Butler was flying all over the field, accounting for 9 solo tackles, and sharing a sack with Freeney.

Reluctantly, this brings me to ILB Bront Bird, who was a disaster (even with a huge 4th down stop). The Texans targeted him repeatedly with play action passes, ran his way on zone runs, and attacked him inside the red zone for 2 TD passes. He also took poor angles to the ball carrier.

OLB Larry English continues to play, without making any plays. At this point, the defense is better without him subbing in for Johnson on passing downs.

Neither CB Derek Cox nor CB Shareece Wright had much success against WR Andre Johnson. But of the 2, Wright did a better job making the initial tackle and limiting additional yardage. Beyond Johnson, the DBs held up fairly well in pass coverage, the biggest gains came from Schaub breaking contain and extending plays for several seconds. The exception to this was newly–acquired CB Richard Marshall, who was best when blitzing (as in not covering).

FS Eric Weddle had some uncharacteristic missed tackles early in the game, but settled down later and had a few nice defensed passes. SS Marcus Gilchrist was … OK … against the Texans TEs between the 20s, but found himself in no man's land on a few play–action passes.

Kickoff and punt coverage was solid, with the exception of a 46 yard return in the 1st quarter, and of course getting caught napping on the 4th quarter punt fake. The Chargers got one solid return out of Fozzy Whittaker for 42 yards.

PK Nick Novak got only 1 touchback on 5 kickoffs, and converted all 4 PATs. P Mike Scifres had an OK day, averaging 47.8 yards per kick, but saved his worst kick for last, which set the Texans up with good field position for their final drive.

Mike McCoy was very good in terms of game management. He was judicious in not challenging any plays which couldn't be overturned (some of the pass reception rulings were questionable), and absolutely made the correct call to go for the 4th and 1 in Houston territory in the 2nd quarter.

Offensive Coordinator Ken Whisenhunt called a solid game, although I was surprised at the lack of screens, end arounds, or other plays which might have taken advantage of the Texans' defensive speed. I also think the decision was made at halftime to stick with the controlled pass game - which might well have worked had Rivers been a bit more judicious in his choices.

Defensive Coordinator John Pagano, on the other hand, seems addicted to the idea of not giving up the big play, and is unwilling to roll his corners up and come with blitzes on 3rd and long. The Chargers paid dearly on consecutive 2nd half possessions, allowing conversions on 3rd and 18, plus a 3rd and 13. Stops on either play likely allow the Chargers to maintain control of the game.

One Play I Really Liked: 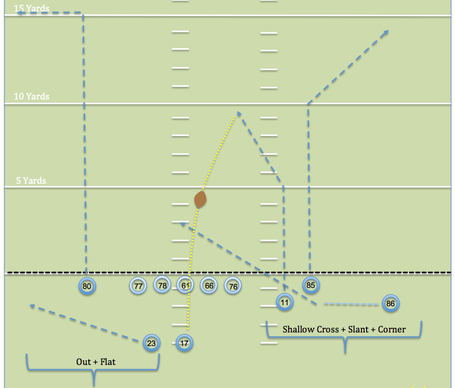 Graph of the Game - Time of Possession: 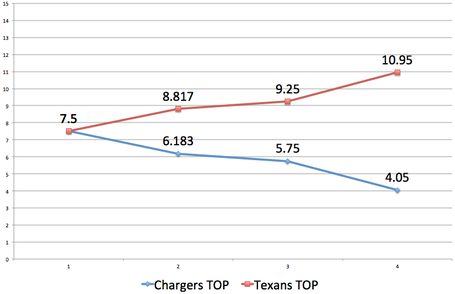 Author's Note - Minutes on the Y axis, Quarter on the X axis. Sorry the times are decimal in the graph (Check out the table below for the translation).

It goes without saying it's really hard to beat a ball control running team like the Houston Texans with numbers like this.

You think this game wore the defense out? How about a short week, cross country flight, 10:00am Sunday game, against Chip Kelly's Eagles team, which is using up only about 20 seconds between plays. Yikes!