San Diego Chargers to be Stronger at Strong Safety in 2013

Why Marcus Gilchrist should be an upgrade over Atari Bigby this season for the San Diego Chargers.

Share All sharing options for: San Diego Chargers to be Stronger at Strong Safety in 2013

Although that's not Marcus Gilchrist's jersey number this season, it'd sure make some sense for him. After all, he's penciled in to be the eleventh different player the Chargers have started at strong safety since 2003. That's some run of ineptitude, but there's hope steadily building at Chargers Park that Gilchrist can finally be the guy that turns the tide.

The word out of training camp so far has been positive as the Clemson alum continues the transition to what many considered to be his natural position out of college. If he eventually is named the starter for the regular season - which seems all but certain at this point - Gilchrist won't have to do much to be a considerable upgrade over what Atari Bigby was last season.

That's because Bigby was, well, atrocious.

Actually, atrocious may be a bit of an understatement. Here's some data for you: 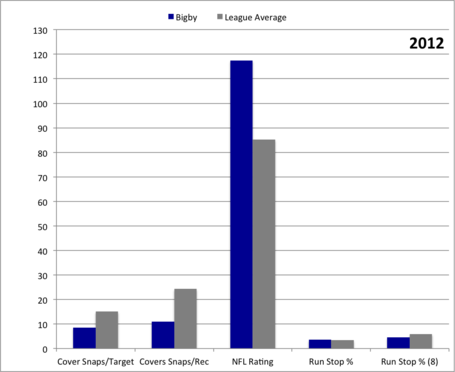 I've explained these statistics before, so I won't rehash it all here. I think they're self-explanatory for the most part. (Although if you're a little confused at this point, stop reading and click here.) However, since I did such a poor job of explaining what a "stop" is in that previous post, I'll spend a little time explaining it.

A stop constitutes a loss for the offense, but it all depends on the yardage and down on a particular play. On first down, an offense must pick up 40% of the required yardage for a first down in order for the play to not be counted as a loss - and thus a stop for the defense. On second down, 60% is required, and on third or fourth down, an actual first down is required. So as a simple example, if an offense runs for only three yards on first and 10, it would constitute a stop for the defense. Easy, right? As I've explained before, it's just a way to see what percentage of a player's tackles against the run truly made an impact on the game.

In the interest of full disclosure, I should tell you that I calculated the league averages here using all safeties that played at least 50% of their team's snaps for a respective category. For example, a player needed to be on the field for at least 50% of his team's total snaps against the run in order to qualify for the two run categories in the above chart. On average, the population size here is a little north of 50 players for each category.

Since it'd be pretty hard to see Bigby's yards data in the chart above, here it is on its own: 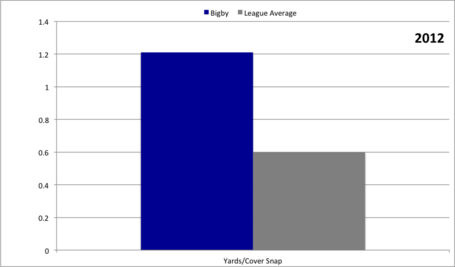 As you can see, he was particularly bad in coverage. I'm willing to accept that his target data was a little inflated due to the fact he played opposite of the league's best safety, but the rest of the numbers aren't exactly pretty. It's particularly startling to see that his yards and reception data was right around double that of the league average - and that's not even mentioning his extraordinarily-high NFL rating. With numbers like those, it's a wonder why team's even threw the ball to Weddle's side of the field at all.

I'm sure you're convinced, but who doesn't like some tasty GIFs to reinforce a point?

Yes, Bigby was better against the run, but he was still right around league average in stoppage rate. That's not great for a guy whose primary strength was considered to be in run support. Also, how many times did we see Bigby whiff on a tackle or bounce off of a running back because he apparently forgot how to wrap up? Would you like a little reminder of how hopeless he was at times? Sure you do.

There's no way of knowing for certain how good Gilchrist will be at strong safety, but it's hard to imagine him being any worse than his predecessor was. All in all, he should at least be a modest upgrade and allow Eric Weddle some extra freedom to focus even more on being a playmaker - which should only lead to good things for this defense.

Here's to hoping number twelve is a long way off.