Do the 2013 San Diego Chargers have any hope for the playoffs?

The Chargers road to the postseason is a winding two lane mountain road with patches of black ice. The vehicle has bald tires and a rebuilt engine. But there's a new driver behind the wheel, the road is easy early, and the engine has time to get properly run in. A little luck wouldn't hurt, either.

Share All sharing options for: Do the 2013 San Diego Chargers have any hope for the playoffs?

Many would say no.

The Chargers have regressed over the last 2 seasons, and it will likely take 2-3 years of good drafting and free agency before the damage done by former GM A.J. Smith and former Head Coach Norv Turner can be undone.

However, a closer look at the numbers shows a couple rays of hope for the Chargers' 2013 season.

The first regards a schedule that doesn't appear to be terribly difficult. The second involves a potential reversal of the Chargers' generally poor performance in close games under Norv Turner.

Author's Note: All "Expected Win" statistics have been taken from Football Outsider's Almanac 2013.

Item #1 - The AFC and the Chargers' schedule.

I think it's a fair statement that the AFC is in the midst of a down cycle. The favorites to win are clear in 3 of the 4 divisions (West: Denver, South: Houston, and East: New England).

If these numbers are accurate, the Chargers are running behind the Steelers and Bengals, and are virtually even with the Colts and Jets for the AFC Wild Card berths. Furthermore, the Chargers have direct control of their fate with home games against Cincinnati and Indianapolis, and may have received a nice assist from Rex Ryan on Saturday night.

Overall, the Chargers are expecting to play a total of 6 games against opponent's with an Expected Win difference of less than 1 game. Let's see why this is significant.

Item #2 - The Chargers under Norv Turner

It's essential to review how the Chargers have performed in their recent history in close contests. As a general rule, wins decided by 1 score or less tend to regress to the mean. Here's how the Chargers performed under Norv Turner in 3 graphs: 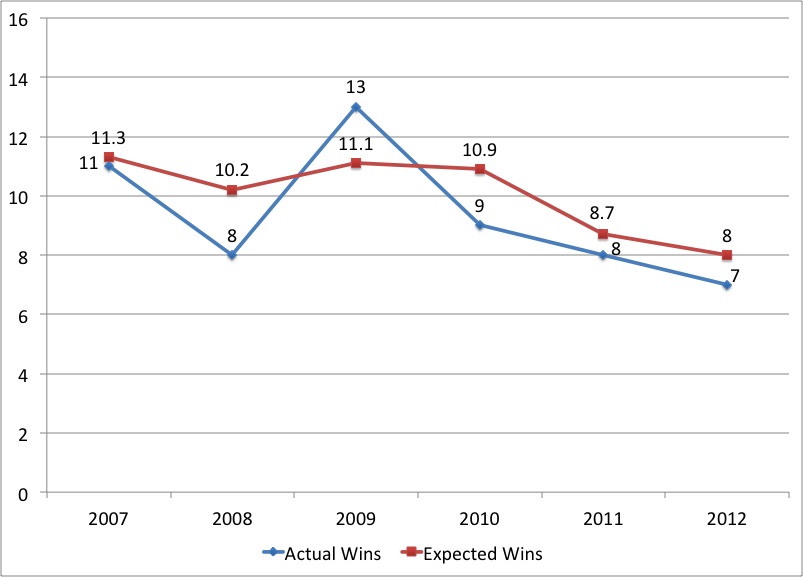 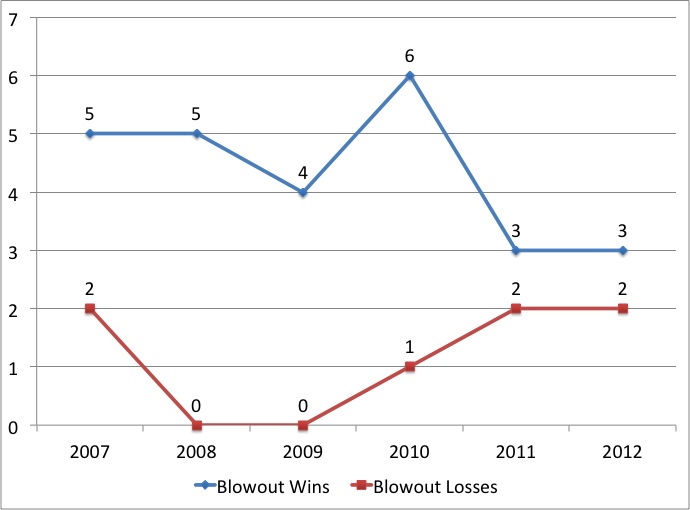 Here's a comparison of blowouts under Norv, both Wins (blue) and Losses (red). This is the graph that clearly shows the loss of talent under A.J. Smith - blowout wins and losses are a better indicator of team quality than performance in close games (which leads to)... 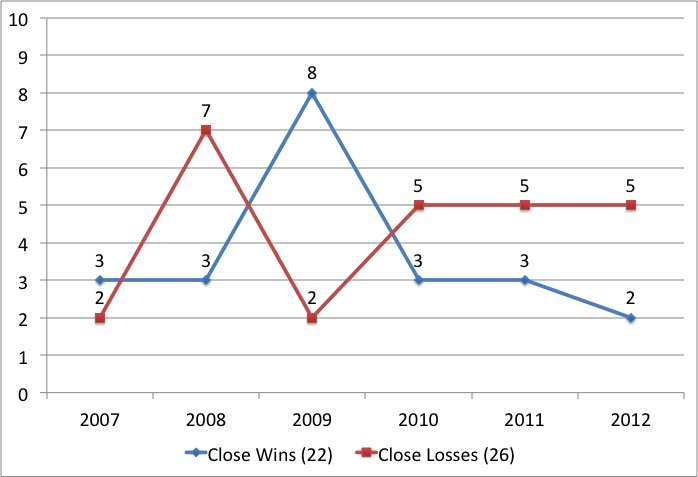 This graph shows the results of close wins and losses (i.e. 8 points or less) under Norv. This graph is similar to Graph 1, and shows pretty conclusively that 2009 was Norv's high-water mark as a coach, and an outlier.

I'd also like to add an interesting statistical anomaly from the 2012 season: the Chargers blew 3 2nd half leads of more than 8 points, without posting any equivalent come-from-behind wins. In the first 5 years under Norv, the Chargers were 4-3 under these circumstances, and never were worse than 1-1 in any season from 2007-2011.

Remember those 6 games against opponents with an Expected Win differential within ±1.0? This data indicates the Chargers would likely not win more than 3 of those games (i.e. forget about the playoffs) if Norv were still Head Coach.

Here's where the hiring of Mike McCoy has a chance to be significant.

Put simply, if McCoy can provide an average performance in close games, the Chargers can expect to go at least 3-3 in the games with the smallest expected gap between the Chargers and their opponent.

But there's a significant other issue, and it's related to the new offensive design.

Part of the change in offensive philosophy is related to the Chargers' well–documented O-line problems. It's clear the Chargers did not have the personnel in 2012 to run Norv's version of the Coryell Offense. It also seems clear that Norv's stubborn adherence to his system didn't help his performance in close games. As the following demonstrates:

As we've already seen this preseason, the Chargers' version of the Erhardt/Perkins Offense is predicated on keeping the offense on schedule. This is accomplished by using the no–huddle, using a lot of shallow cross routes as blitz beaters, and running the ball effectively. It does not require a great offensive line to be efficient. Yes, Rivers will need some time to acclimate, but we're starting to see progress on this front as well.

As a closing comparison, let's look at Kurt Warner's first several weeks running the offense in Arizona in 2007 under Whisenhunt. (I'm repurposing this from a comment on one of John's "I'm worried that Rivers is gone after this season and I'm breaking up with him first" columns from a couple weeks ago).

Remember (like Warner) Rivers is coming out of extended time running the Coryell offense, has a good but not great arm, quick release, and is immobile. Like Warner's time in the Arena League, Rivers had some experience running a spread offense in college. Unlike Warner, Rivers is 31 (not 36), and has nothing close to Warner's injury history.

One last schedule note: Even if Rivers struggles early, which is likely, the Houston Texans are the only opponent the Chargers face in the first 7 games of the season with an Expected Win total greater than 0.3 above the Chargers' Expected Win total. There's a good chance for the Chargers can be successful while Rivers gets acclimated, because the schedule is not particularly difficult.

I'm perfectly willing to concede the following about the Chargers:

In my view, the Chargers benefit from the following:

Yes, it's thin. Everything has to be perfect. But hope is a good thing, maybe the best of things, and no good thing ever dies.