Chargers vs Cardinals (Preseason): What to Expect from the Arizona Cardinals

We give you a detailed breakdown of what you can expect from the Arizona Cardinals in Saturday's preseason game.

Share All sharing options for: Chargers vs Cardinals (Preseason): What to Expect from the Arizona Cardinals

With Saturday's upcoming game — the last dress rehearsal for the starters — I'll give you an idea what to expect to see from the Cardinals on both sides of the ball. Through the first two games, the Cardinals have been very consistent in what they do, both good and bad. We'll go over the strengths and weaknesses of the team, and then I'll try and paint the picture with a screen shot.

The Cardinals under Bruce Arians love to get the ball down the field. They have several combination routes where at least 2 of the intended targets are at least 15-20 yards down field or running some sort of vertical route. Whether it's on a standard 5 or 7 step drop, or a play-action pass, the offensive line has done a great job through the first two games in keeping Carson Palmer clean. To put it into perspective, the Cardinals quarterbacks this preseason have dropped back to pass 73 times, and have only been sacked 3 times. Wow.

That allows them to take chances downfield, and hit on bigger plays that they normally wouldn't be able to thanks to a clean pocket, primarily to a certain wide receiver. Yes, Larry Fitzgerald is on the list twice, because he's that good. This is not an understatement when I say he's open every play. The Cardinals have done a very nice job moving him around, in fact, Fitzgerald has been in the slot a whopping 14 times, creating quite the mismatch for the other teams slot cornerback. Let's take a look at Fitzgerald in the slot and the pocket that Palmer has to throw from. 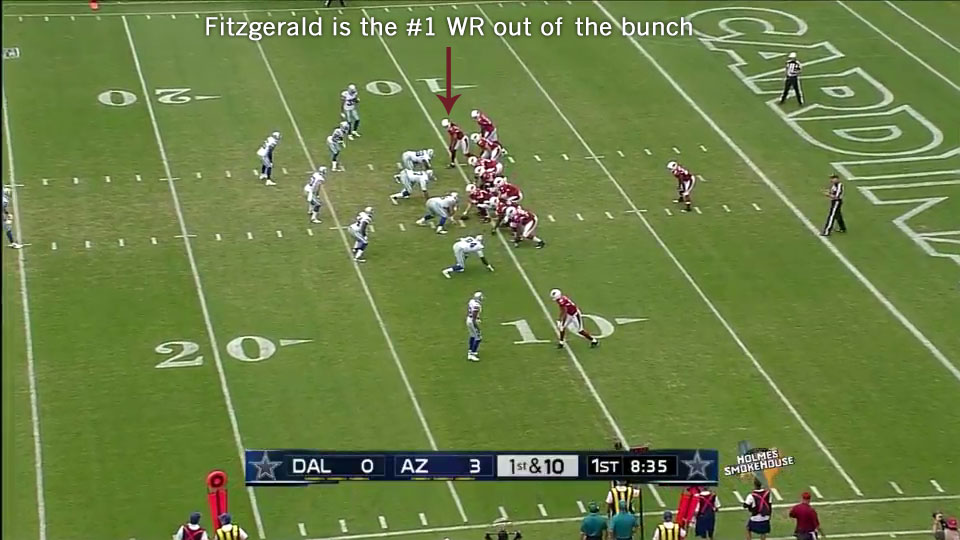 This was a standard formation the Cardinals ran with Fitzgerald in the slot. Each wide receiver runs some sort of vertical route, the receiver on the bottom runs a post route to clear out his side of the field for Fitzgerald. 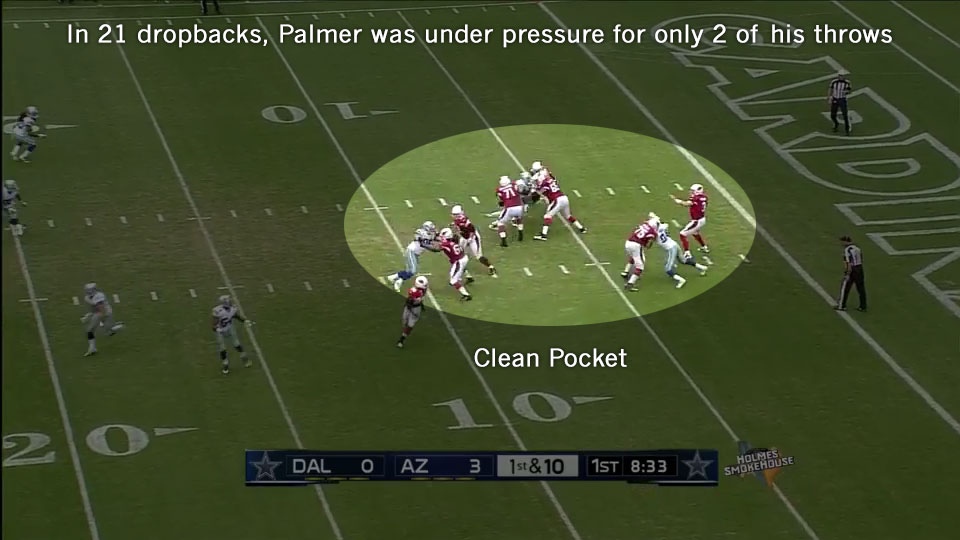 The Cardinals consistently have kept a clean pocket for Palmer to throw from, this was a play-action pass. The Chargers will have to create pressure with their front 4, unlike the Cowboys and Packers. Palmer is deadly when given time. 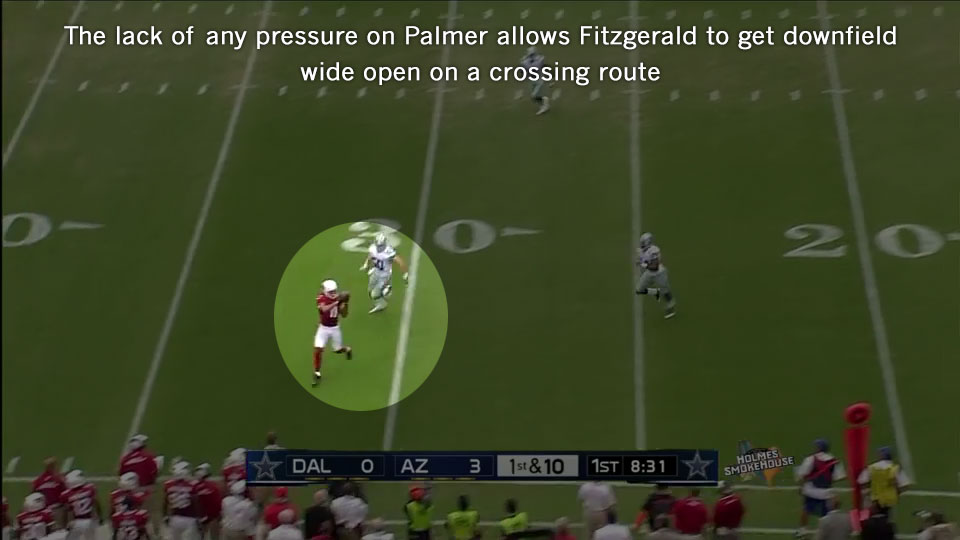 The time allows Fitzgerald to create easy separation from the linebacker downfield for a big gain.

This next play illustrates Fitzgerald's brilliance in zone coverage, again, out of the slot. The pre snap read shows man coverage. 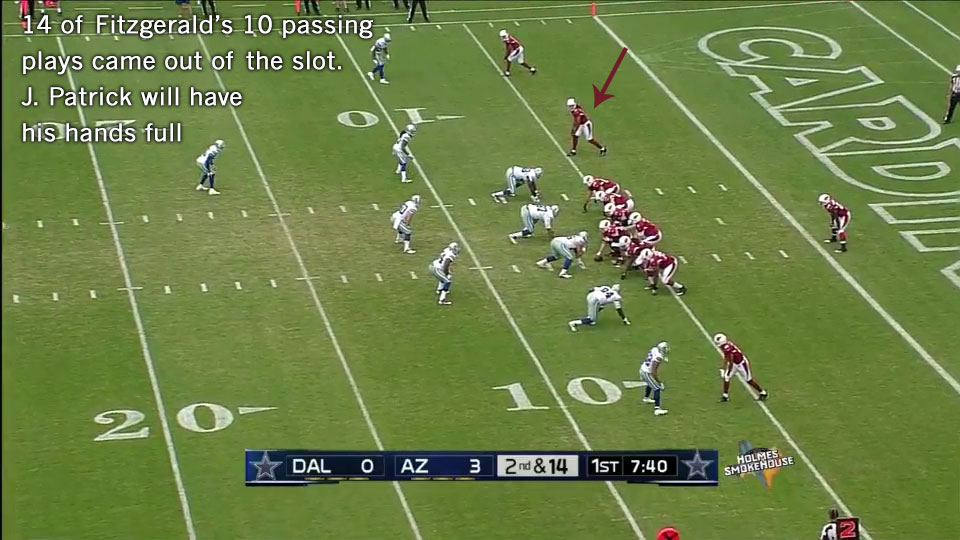 The pre–snap read looks as if it's man coverage. 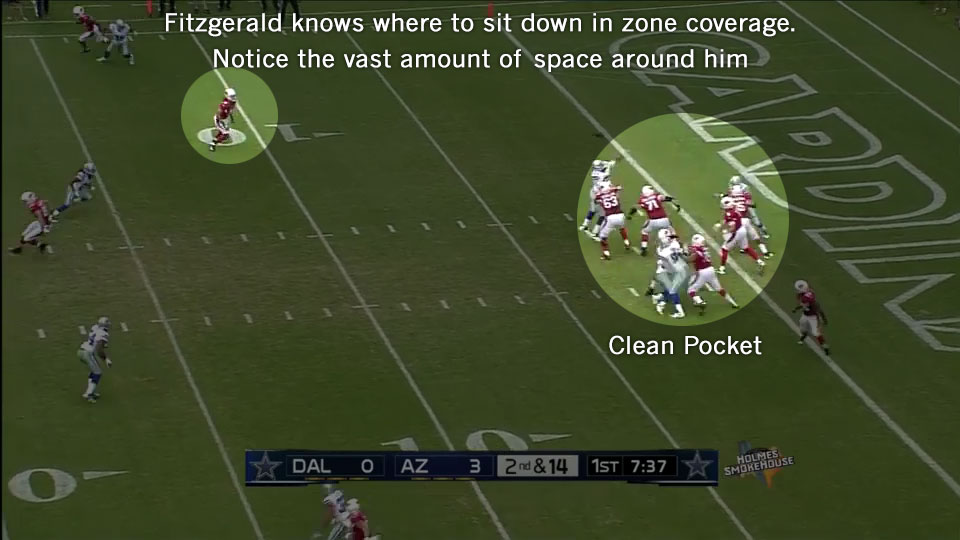 First, notice Palmer again has a clean pocket to step up into and throw out of, a trend throughout the first two games. More importantly, Fitzgerald recognizes the zone coverage quickly and sits down on a "hitch" route about 8 yards downfield. Almost impossible to cover him with zone coverage. 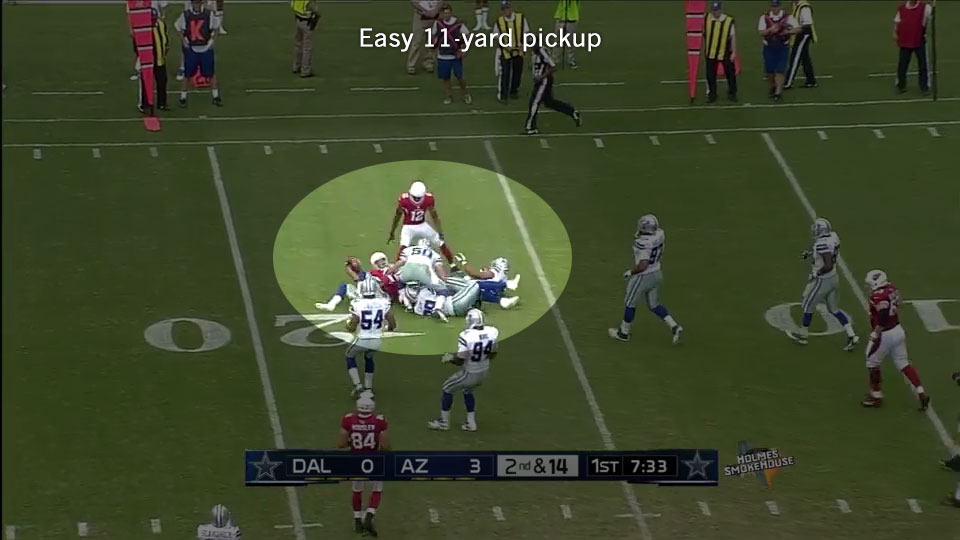 Fitzgerald can beat you in many ways, and now that he has a competent quarterback, he's a very, very dangerous weapon. It'll be interesting to see if the blitz–happy John Pagano rolls the dice and stays aggressive, or puts some sort of "bracket" coverage on him at all times where there's always a safety over top.

The Cardinals run game has really been a weakness so far. Their offensive line is getting zero push, almost making them one–dimensional. I charted the ratio, and it's a bit surprising that the 1st team offense so far has a 25:11 pass–to–run ratio, which is almost unheard of in the NFL. The Cardinals as a team have 66 carries this preseason for an average of 2.9 yards, that's woeful at best.

Stopping the run is something the Chargers have had success at under Pagano, I'd be very surprised if the Cardinals got anything going on the ground Saturday.

The Arizona Cardinals have a new defensive coordinator and it looks like Todd Bowles is still trying to figure a few things out. The run defense has been very, very good. The longest run the first team gave up so far was 9 yards, after that opposing offense was lucky to get 4. It seems like they are very well disciplined with safeties attacking the line of scrimmage and the defensive lineman winning their battles. They're beefy up front so the Chargers interior line will be tested early and often. This could be the game that exposes the lack of true strength from Rinehart, Hardwick, and Clary in the run game.

Patrick Peterson. What a gifted athlete. Let me just say that throwing his way, well, it's never a good idea. He sits on every route looking to make a play, but is fast enough to where he can get away with it because he knows he'll be able to catch up with the receiver. Here's what I mean. 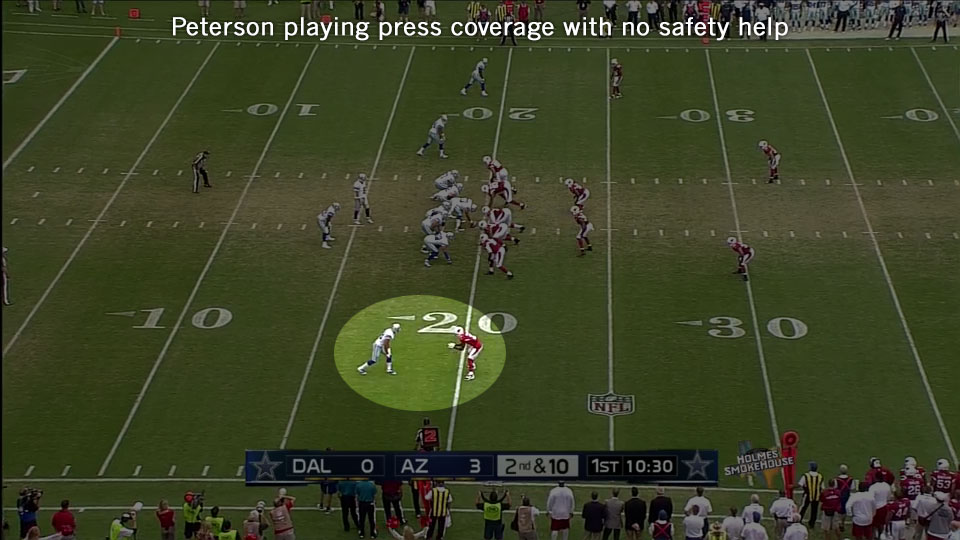 Press coverage here, the safety to his side is in man coverage, so he knows he has no help. 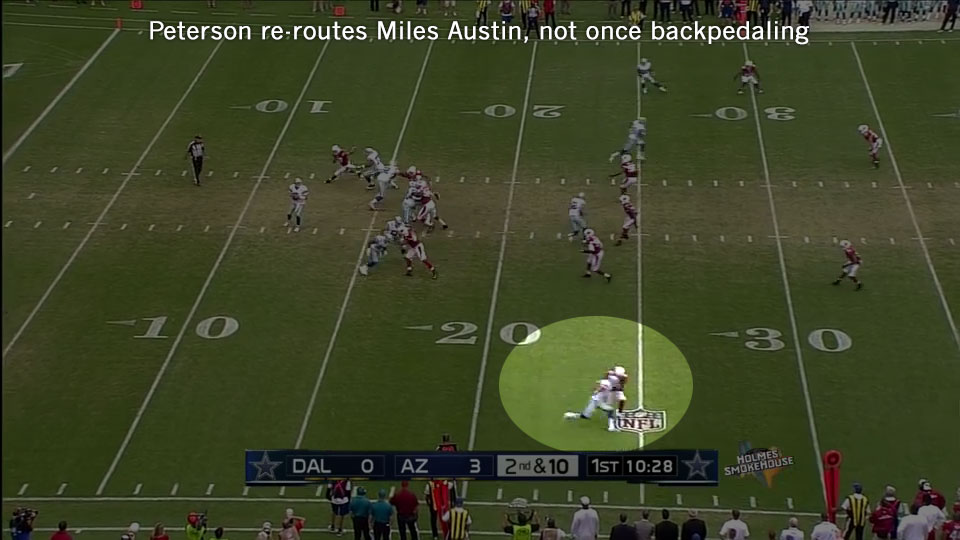 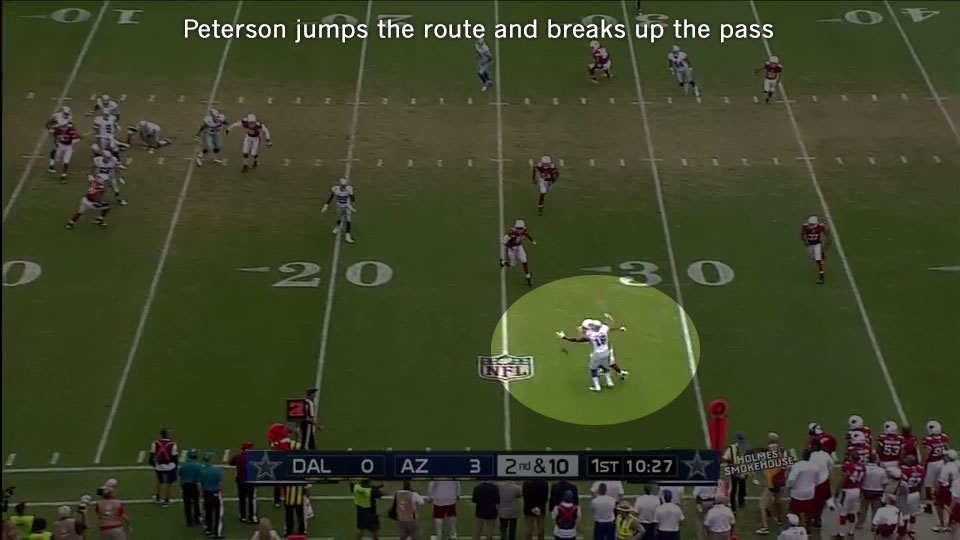 This is Miles Austin, not exactly a scrub, and Peterson just takes a few shuffles, re-routes Austin off his route, jumps the curl route and makes a great play to break up the pass. 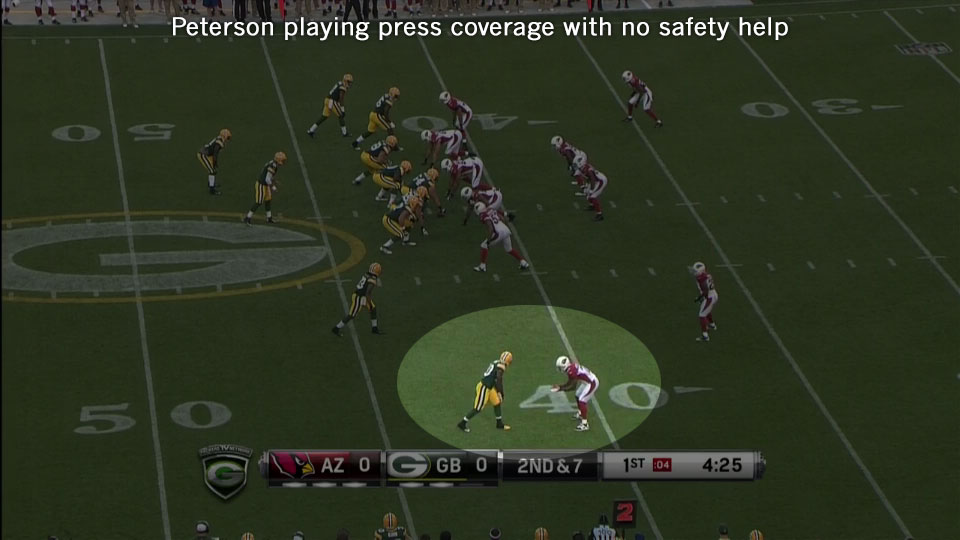 Same situation on this play, press coverage with no safety help. 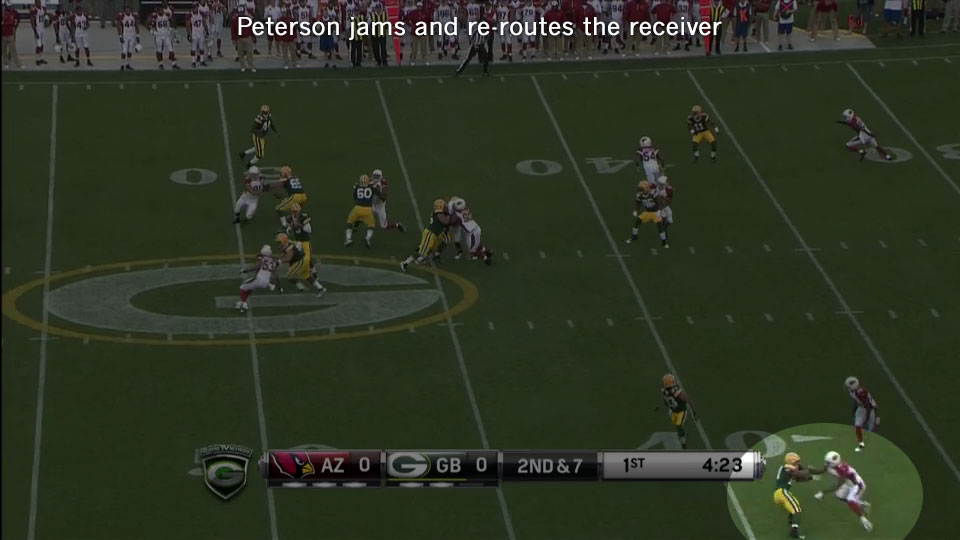 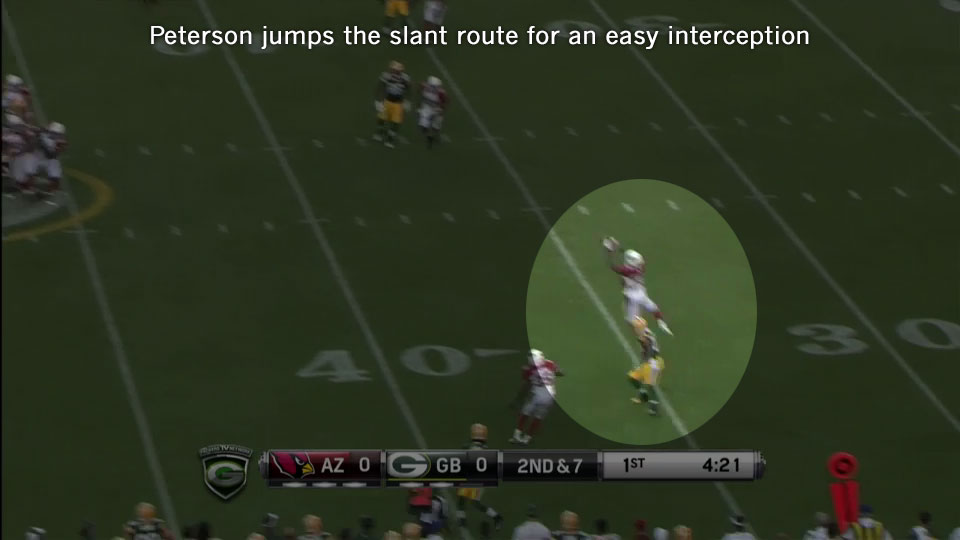 Peterson bullied the receiver on this route, he cut him off, and jumped the slant route for an interception.

I think because Peterson is so aggressive, he can be beaten on a double move, but you have to have protection, and have to set in order to pull these off.

Basically the opposite of what the offensive line has done, the defensive front has yielded next to zero pressure. Romo and Rodgers have both had time to sit in the pocket, make a sandwich, check Twitter, and then read the defense. So far it seems that this defense is far less aggressive than the Ray Horton–led attack last year, and it's really hurt them.

I'm confident that the Chargers offense will get clicking for that reason, and that the other defensive backs have given up their fair share of plays. A lot of talk has been made about rookie Tyrann Mathieu, but I've watched him, and against Dallas he gave up 6 catches for 71 yards and was never in position to make a play. Whether he's guarding Gates, Allen, or Brown, it should be advantage Chargers. Let's look at how poor the pass rush has been, as well as a couple big plays. 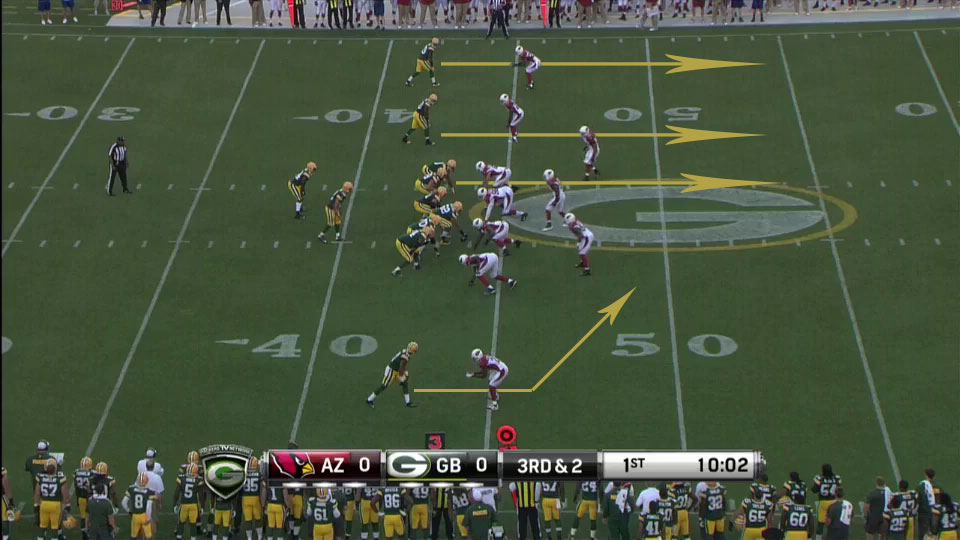 Press man coverage, with one safety over the top, as I said their safeties get nosy around the line of scrimmage, tend to be very aggressive. The linebackers are creeping up, showing pressure. 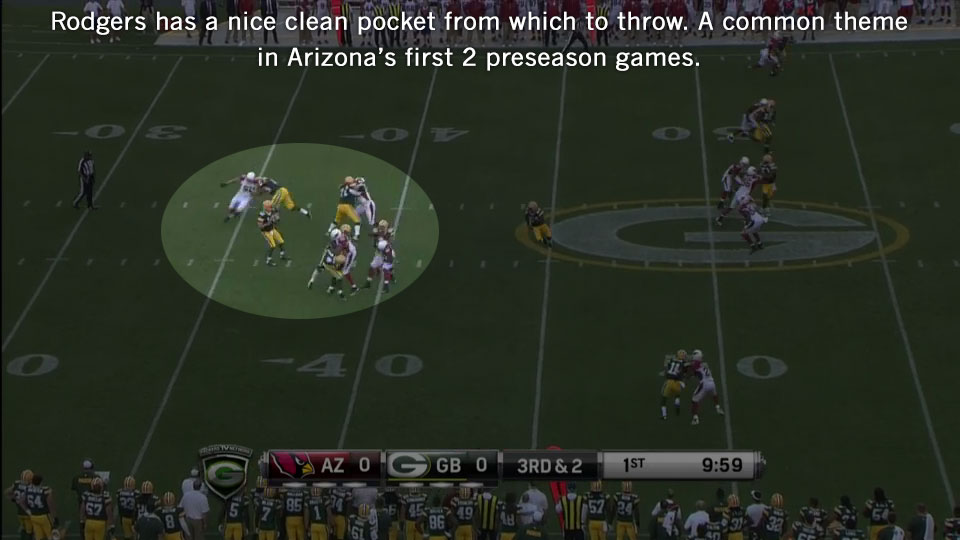 Arizona doesn't blitz and plays "Cover 1 Robber" which is when you play man coverage, with one safety playing the center field role over the top, with a linebacker underneath for all crossing routes. The key here is the pass protection, or lack thereof. The Cardinals really struggle to generate pressure. 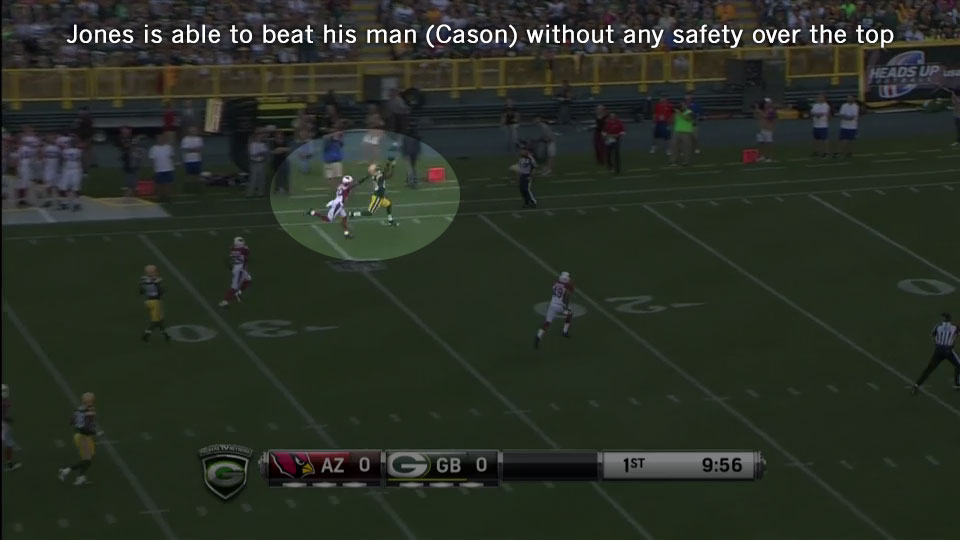 The receiver wins his match-up against some corner that played for the Chargers last year, making for a pitch and catch for 50 yards. 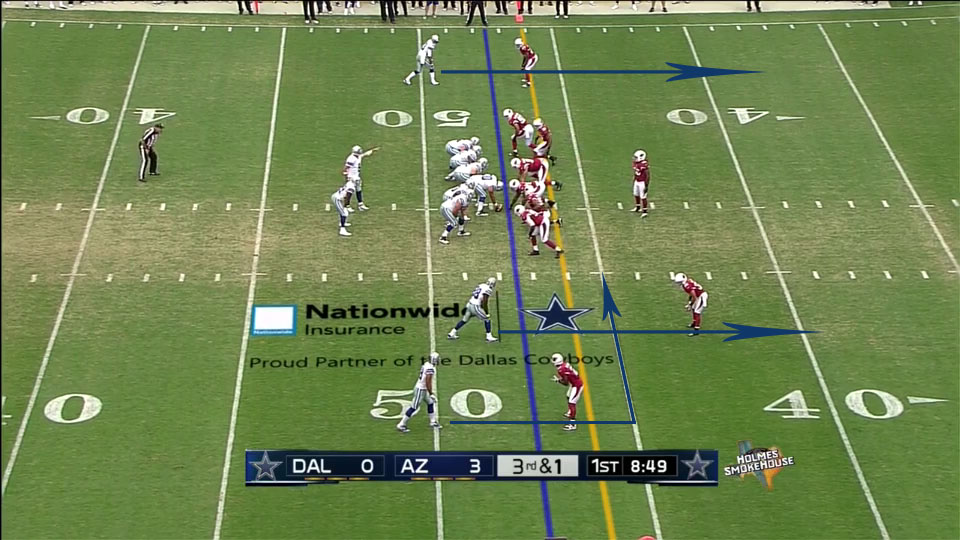 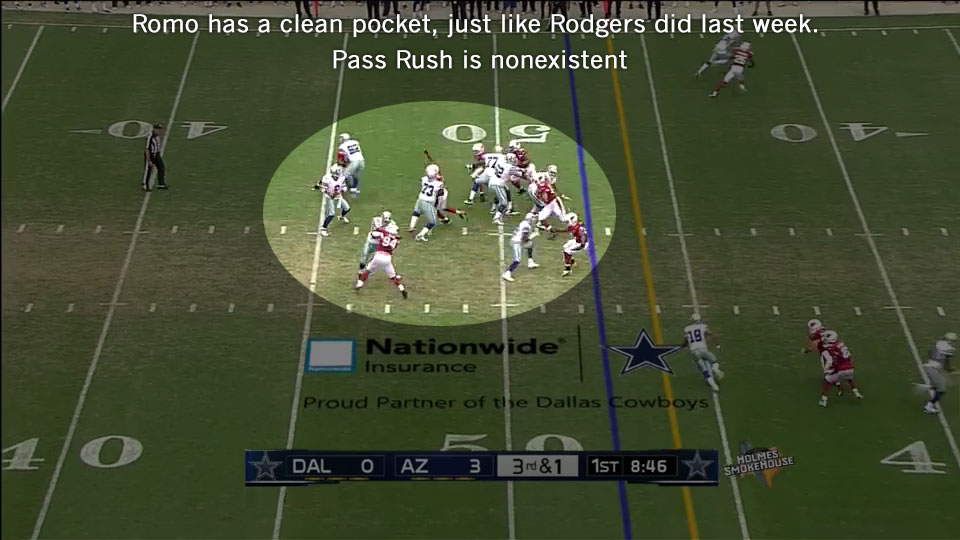 This is one of the few plays the Cardinals bring pressure, but the Cowboys leave both tight ends and the back into block, only sending 3 receivers on routes. Romo has plenty of time to throw here. 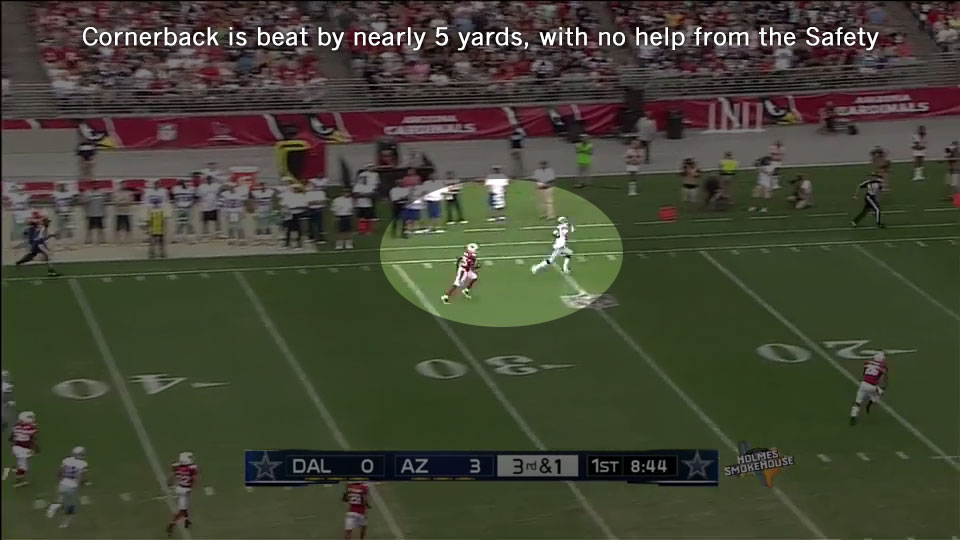 The safeties, expecting the tight ends to run a route, crept down towards the line, leaving the corner Jerraud Powers on an island, where he was beat pretty easily by a third–round rookie Wide Receiver.

It will be very interesting to see how the Chargers attack the Cardinals defense, because they haven't really taken many shots down the field. Any sort of play-action pass and we could finally see a pass play of over twenty yards.

As for the running game, we know the Chargers love to run right. On plays where they run behind Fluker or to the right of him, they average 5.8 yards per carry. It will be interesting to see if they stick with the run if it doesn't work the first few series.

Defensively the Chargers must put pressure on Palmer, or else it will be a long day. The Cardinals love to stretch the field as well as run quick screens to their receivers (Peterson is their 4th receiver) so the secondary will be tested early and often. The Chargers defense has been solid so far but we'll see if they can keep it up against one of the top receivers in the game.

As far as stopping the run, Arizona hasn't showed any reason to be worried about their running game. If the front 7 continues to play like they have been, the Cardinals should continue their struggles in the run game.