The Chargers' offensive line didn't just make Philip Rivers look bad in 2012, they made anyone who tried to run the ball look bad as well. With only one starter returning in his original position, will new blood and a coaching change help the offense run the ball better?

A move that still seems a bit puzzling to me is the San Diego Chargers' decision to draft D.J. Fluker at 11th overall in the 2013 NFL Draft. In doing so, San Diego's new regime decided to move former tackle Jeromey Clary to guard, believing that he had the power and mean streak to play inside but not the footwork or quickness to play outside. That sounds a lot like the scouting report for Fluker, who happens to be replacing Clary as the starting right tackle. This indicates that Mike McCoy and Tom Telesco stressed improving the running game.

Running the ball will be especially important in 2013 with Philip Rivers having to learn a new offensive system. He has not looked very comfortable in a (very) small sample size so far, so the Bolts will need to run the ball successfully to keep the offense on the field and on schedule.

Even though the offensive line's pass protection ability is still largely in doubt, offensive schemes and good quarterback play can neutralize a less than stellar offensive line. New offensive coordinator Ken Wisenhunt was brought in by McCoy to help do just that. With the oft-injured Ryan Mathews serving as the team's lead back, Telesco felt the need to draft a powerful, mauling offensive tackle to help run the ball no matter who is in the backfield.

How bad was the offensive line last year?

In 2012, the Chargers averaged 3.6 yards per carry; Better than only the Arizona Cardinals. They also tied for last in big plays through the running game, having only four runs that went for 20 yards or more. Much of this was due to the play of left tackle Michael Harris, who was the worst offensive lineman in a long time and had no business starting on an offensive line. As a result, San Diego running backs averaged only 3.4 YPC in runs off of left tackle and only 3.9 YPC on runs in the left B gap (according to Pro Football Focus). Lets take a look at how bad it really was. 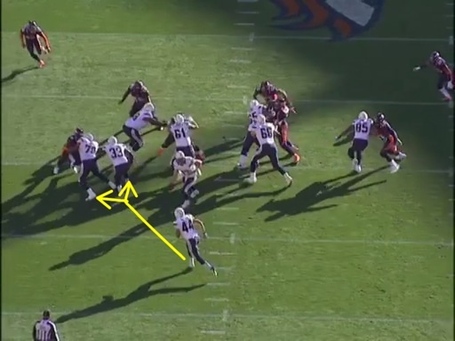 Here is a stretch play off left tackle. Jackie Battle has the option to run outside the left tackle or cut inside to the B gap. 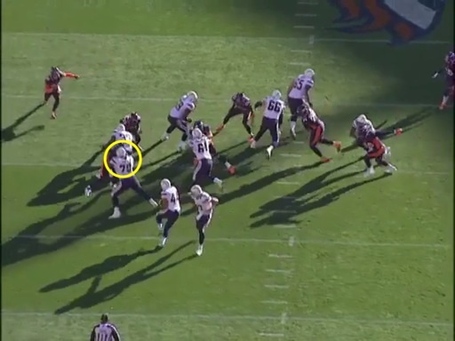 Turns out he doesn't really have an option. By the time he receives the hand-off, Harris is blown up about 4 yards into the backfield. The defensive end Robert Ayers forces Battle inside for no gain.

With Mike McCoy calling the plays in Denver last year, the Broncos' rushing attack favored the right side. Excluding runs inside the tackle, they ran 107 plays to the right as opposed to 85 to the left. Even with star offensive tackle Ryan Clady on the left side, McCoy preferred to run the outside stretch runs and pitches behind right tackle Orlando Franklin. Expect the Chargers to make best use of Fluker's power and run behind him a healthy amount.

The bottom line is that the Chargers have to run the ball better. An upgrade at both tackle spots should really help keep the running lanes from collapsing like they so often did in 2012. A better running attack will help take pressure off a passing game that will be learning a new scheme.