Thursday night was our first look at how Mike McCoy and Ken Whisenhunt will apply the Erhardt/Perkins offense to the San Diego Chargers, with a little sprinkle of Peyton Manning thrown in.

Although the San Diego Chargers first string offense played just one series on Thursday against the Seattle Seahawks, we got to see a decent variety of play concepts. However, before we go forward, let's remember how the Erhardt/Perkins offense operates.

Each concept has a name, chosen by each team. Thus, a play might have a name such as Mike & Ike (Mike the double slants, Ike the corner, post, go). The concept can be run by WRs, TEs, RBs, or any combination thereof.

First, a couple of general observations:

Anyhow, on to the plays from the first possession. For a more detailed breakdown on the results of each play, check out Kyle's article from yesterday.

"12" personnel (1 RB, 2 TE, 2 WR). Ryan Mathews runs behind the new right side of RT D.J. Fluker and RG Jeromey Clary. TE Antonio Gates motioned across the formation prior to the snap. 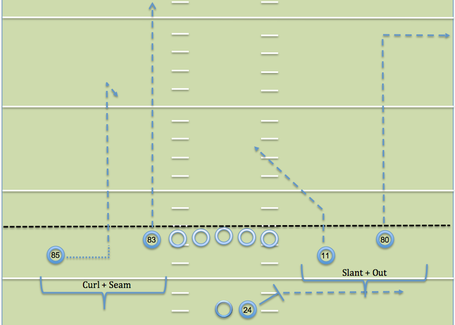 "12" personnel. Rivers holds the ball a bit too long and nearly misses Eddie Royal on the slant, but Royal bails him out with a great catch and a 1st down. A quicker and more accurate throw may generate some YAC.

"11" personnel  (1 RB, 1 TE, 3 WR). Another solid run, this time RB Ronnie Brown running behind Fluker and Clary. WR Malcom Floyd motions toward the play prior to the snap. 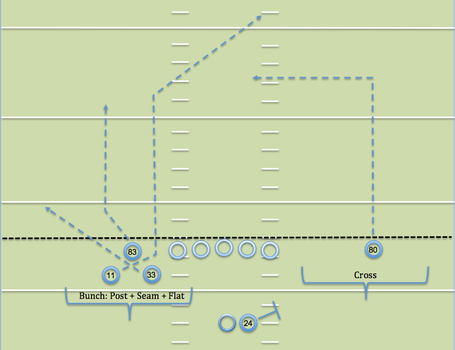 "21" personnel  (2 RB, 1 TE, 2 WR). This is the first appearance of a bunch formation. The bunch is a staple of the Pittsburgh Steelers offense, recalling Whisenhunt's time calling plays for the Steelers. The crossing action of Royal and FB Le'Ron McClain creates confusion for the Seahawks defense, and Rivers gets an easy 1st down throw to TE John Phillips. 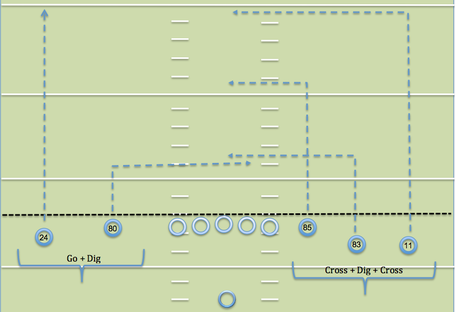 "12" personnel. This play provides the first evidence of concept-based passing (you'll see the Cross + Dig + Cross concept again shortly). Rivers has a quick dig to Floyd and doesn't take it, but steps up into the pocket and buys time for Gates to get open for another 1st down. This is also the only pure pass route run by any of the RBs this possession, with Mathews running a go.

"11" personnel. Royal runs an end-around for a negligible gain, saved only by a mean stiff-arm. This play is another call back to Whisenhunt's time in Pittsburgh, particularly his penchant for calling trick plays. 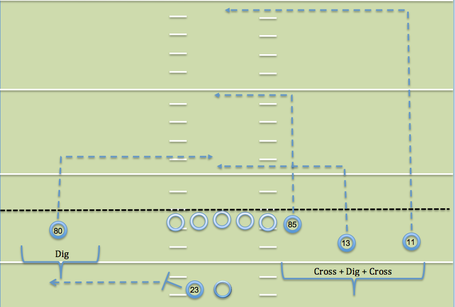 "11" personnel. Rivers has to sneak a short throw into Floyd on a dig, but this was because Seattle's defense does a nice job in coverage. We see a concept deployed for the 2nd time (the Cross + Dig + Cross). Earlier it was done with 2 TEs and a WR, this time with 2 WRs and a TE.

"22" personnel (2 RB, 2 TE, 1 WR). Fluker does a nice job burying his man in the pile and gives Mathews the room to go over the top for the 1st down. I would have liked this even better had Mathews gone over the top with both hands covering the ball. Hey, at least he got up after the play. If you noticed, McCoy pulled him immediately after this play. 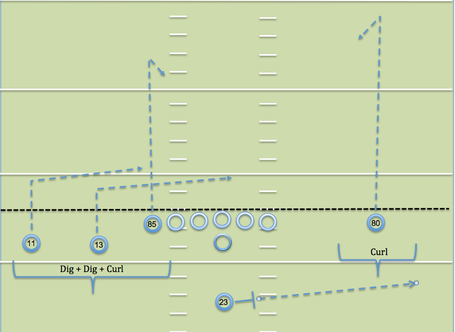 "11" personnel. This play was the best timing Rivers had on the short throws, hitting WR Keenan Allen on a dig for a 4 yard gain. 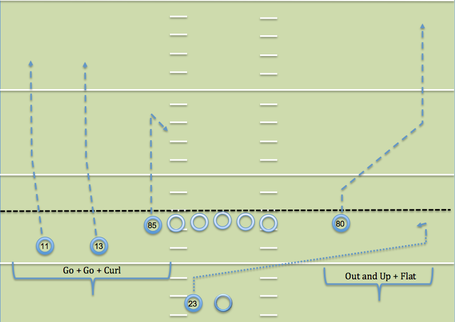 "11" personnel. Rivers gets greedy on this play, trying to hit Floyd on an out-and-up for a TD. His discomfort is also evident when you notice he misses the quick toss to Gates, who sat down in a zone hole and would have been near a 1st down. 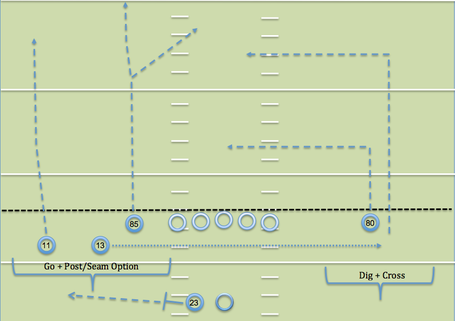 "11" personnel. In this case, Rivers doesn't take the Dig to Floyd, who has a chance for a 1st down with some YAC. Rivers scrambles instead, coming up just short of a 1st down, and forcing a short FG attempt.

By the way, this play is a clear sign that McCoy does what all smart coaches do, and that's steal from the best. This is the play Peyton Manning goes to when he needs a 1st down. It comes from the Manning-Tom Moore playbook in Indianapolis, and Manning brought it to Denver (and McCoy) last year. Variations of this play went for an Eric Decker TD against the Chargers in Denver last year, and also went for a Dallas Clark TD against the Chargers in the 2008 AFC Divisional Playoff Game in Indianapolis.

Here's my takeaways from the opening drive.