A History of the San Diego Chargers: Part 14 – Homecoming

With the 1978 season swirling down the commode, Tommy Prothro resigns. To replace him, the team turns to a coach that is well-known to San Diego football fans.

Share All sharing options for: A History of the San Diego Chargers: Part 14 – Homecoming

If you grew up in Southern California during the 70’s, you got used to seeing cars (a lot of them VW vans or VW Beetles) sporting bumper stickers informing you that "Jesus Saves!" But in mid–October of 1978, many rear bumpers in San Diego started to display a new sticker: yellow with blue lettering, insisting that "Coryell Saves!" There was a lightning bolt between the two words and for the life of me; I could not find an image of one my favorite bumper stickers from my teenage years to post here.

At the press conference held on September 25, 1978 announcing Prothro’s resignation, Klein also announced the immediate hiring of Don Coryell as the new head coach. The team had clearly been working on this for a while, and we have Bill Bidwell to thank for being able to get Coryell.

Don Coryell was well–known in San Diego; after all, he coached the Aztecs from 1961 through 1972 and for a few of those years, the Aztecs were more fun to watch than the Chargers. In his career as head coach of the Aztecs, he amassed a record of 104-19-2. He led the Aztecs into Division 1 play in 1969 after the team’s 3rd undefeated season since 1965.

In his early college coaching career, Coryell was known as an innovator of I-Formation power–running football. That was in the 1950’s and the passing game was still viewed as being a high–risk–low–reward proposition by most college coaches. It did not take long for Coryell to change his own style after he took over as the Aztecs Head Coach.

Finding it difficult to recruit against UCLA and USC for the big offensive linemen and talented backs that were needed to make a power running game work, Coryell went a different direction. Being right on top of Gillman’s Field Balance/Vertical passing game and finding that he could recruit talented QB’s and receivers, he changed his philosophy completely by 1963.

There are a few vague accounts of Coryell being a frequent visitor to the Chargers’ preseason practices during the Gilman days, but little hard documentation. In any event, the Aztecs’ offense and the success many SDSU QB’s and receivers had in the NFL shows that there was a profound influence from Gilman to the SDSU Football program in the 1960’s. It also worked the other way: a lot of SDSU players in the mid-60’s traded in Black and Red for Powder Blue after they graduated.

Coryell’s changes to the Gilman offense were dictated by the need to simplify it for the college game and some brilliant insights into how to beat zone defenses, and a simplified system of QB reads. Reception eligible players were taught the "Passing Tree", where routes were assigned numbers and the players assigned letters. 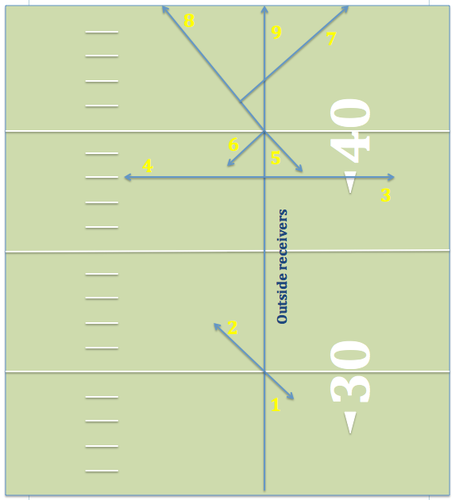 A QB could announce the formation and then recite a series of letters and numbers in just a few seconds in the huddle. 5 players would know exactly where they were supposed to go on the field when they broke the huddle and the QB knew exactly where his receivers were supposed to be after the snap. To beat zones, players would start from different spots on the field and end up passing through, crossing, or being in the same area at the same time. This practice became known as "flooding the zone". Sometimes, the routes were designed to be run through, under, or on top of the zones. Receivers often ended up in high–low positions over and under one single defender. 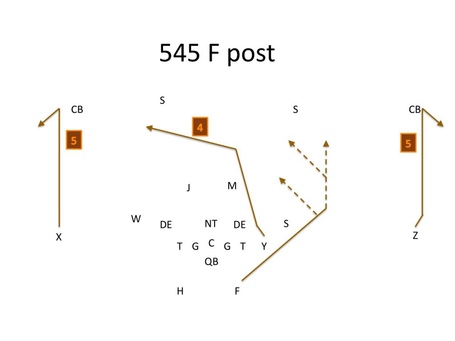 The QB was trained to drop back 7 steps with his eyes downfield and if the deep ball was open, get the ball out as soon as the drop back was done and his feet set. If the deep ball was covered, the QB was to look shallower, to the intermediate route, than short, than the dump off. When the QB had completed his 7 step drop, he should already know where he wanted to throw. Coryell's last innovation waited until he started in the NFL and had the practice hours needed to properly develop the "timing route".

The Twisty Road Back Home

In 1973, while the Chargers were preparing for the nightmare season, the St. Louis Cardinals lured Coryell into the NFL. The Cardinals had not played postseason football since 1948, but in 1974 and 1975, the Cardinals won the NFC East division title, beating out Tom Landry’s Cowboys and Washington’s "Over the Hill Gang." The Cardinals' primary weapon was an all–purpose back named Terry Metcalf, who set the NFL record for all-purpose yards in 1975.

At the end of the 1977 season, the Cardinals did not re–sign Metcalf, who departed for the CFL. This made Coryell unhappy enough to talk with Carol Rosenbloom about possibly being the Rams head coach in 1978.

Bill Bidwell got wind of the discussion. After threatening Rosenbloom with a tampering charge (Coryell had two years left under contract), Bidwell informed Coryell that he would not coach the Cardinals in 1978. He did this without releasing Coryell from his contract. This left Coryell in football limbo; officially under contract with the Cardinals, but "not rehired" for the 1978 season.

The Chargers quietly approached Bill Bidwell after Prothro informed the team during training camp that 1978 would be his last season coaching the Chargers. A preliminary deal was reached with Bidwell: the Chargers could hire Coryell at the end of the 1978 season in exchange for the team’s 1980 3rd–round draft pick. The Chargers then asked Coryell if he had any interest in "possibly" becoming the Chargers Head Coach in January 1979. Some in the front office, remembering the year that Bill Walsh was with the Chargers, wanted to see if he could be lured away from Stanford to coach the Chargers.

After the unholy roller and the loss to Denver afterwards, the team called Bidwell and asked if the deal was good enough even if they hired Coryell during the season. Bidwell did not care. After the Green Bay meltdown, Klein contacted Coryell that Sunday evening and offered Coryell the job immediately. The press conference on September 25, 1978 announcing the coaching change was overshadowed by PSA Flight 182 crashing into North Park that morning, killing 144 people.2

With a new head coach, the team struggled initially, losing 3 of their first 4 games under Coryell. The team then went on a four–game winning streak, not losing again until James Harris filled in for an injured Dan Fouts at Kansas City on November 26, 1978. The team had a 6-7 record at the end of November, but had not put up more than 24 points in regulation — they did score 29 in an overtime win in the home game against Kansas City — and did not look impressive nor overwhelming during the season, but had gone 5-4 under Coryell.

Then the calendar flipped to December and the future of NFL offenses dawned in the San Diego Stadium air. "Air Coryell" was not yet a thing and is now used to describe the 1979—1982 Chargers playoff teams. I was watching the Monday Night Football game on December 4, 1978 against the Chicago Bears and I can tell you that I (and anyone else watching) witnessed the birth of Air Coryell that Monday night.

332 yards passing (JJ caught 155 of those yards), 150 yards rushing, 3 passing TD’s, and 2 rushing TD’s added up to a 40-7 demolishing of the Bears on national TV. The defense allowed a mere 112 yards of total offense. The Bears got one TD on an interception returned for 60 yards.

It was magnificent; as a kid growing up in San Diego and watching football, I had seen MANY bad Chargers games. I had seen the team gut out wins in games it should have lost. I had seen teams manhandle the Chargers plenty of times. I had seen games won and lost by the thinnest of margins, watched unholy rollers in disbelief, and games thrown away by Fouts, Harris, Unitas, and a bunch of scrub QB’s. What I had no personal memories of as a 16 year old Chargers fan was seeing MY TEAM dominating a football game in all phases from beginning to end. I really enjoyed it.

The 1978 season was closed out with a 37-10 win over the Seahawks at home and a 45-24 victory against the Oilers on the carpeted concrete in the Astrodome. Three games won with a combined score of 122-41. As impressive as those wins were, the 9-7 season record did not get the team a wildcard spot. The team missing the playoffs again could be blamed on the unholy roller or the two losses in games James Harris started. I personally blame the unholy roller, refs that made the Hochulli call in Denver a couple of years ago look perfect, and satan’s favorite team.

This was the team’s first winning season in the 1970’s. Even more welcome was the continued progress of Dan Fouts. For the first time in his career, Fouts passed for more TD’s (24) than INT’s (20). He also posted a nearly 59% completion percentage and passed for 2,999 yards. This was the last time in Fouts’ career that he passed for less than 3,000 yards in a season when he had at least 10 starts.

The Beginning of Modern Football

There was one more season to be played in the decade of the 1970’s, but I really consider 1978 to be the final year of the NFL I grew up with. With the Chargers’ offense about to become known as Air Coryell and the first year of Bill Walsh as head coach of the 49ers, modern football started in 1979.

These years, chronicled in these videos, I lived on Sunday afternoons watching the NFL with either my Mom and step-Dad or my Grandpa. MNF, with my parents friends joining us for chili, cornbread, and nearly non-stop humor (call it the 1970’s version of game threads) are especially great memories. It was a time when divisional winners were known at the start of pretty much every year; the Dolphins, Steelers, and them with the Cowboys, Vikings, and Rams in the NFC.

Defenses had nicknames, not offenses: The Steel Curtain, The Purple People Eaters, Doomsday, The Orange Crush, The No Name Defense, The Over the Hill Gang. One division, The NFC Central, even had a defense related nickname, The Black & Blue Division. It was "The Juice" and "Franco’s Italian Army", Staubach, Bradshaw, and the despised Kenny "the Snake" Stabler.

The team went into 1979 with the air of a team about to accomplish great things. The nightmare season, Prothro’s masterful rebuild, the Fouts holdout fiasco, and the frustration of watching a good team underachieve were all about to be forgotten about. After all, Coryell Saves.