John Gennaro seems to screw up running the San Diego Chargers' "Bolt to the Q" 5K every year. Find out what went wrong in 2013.

Share All sharing options for: How to run the Chargers "Bolts to the Q" 5K like an idiot

This may be obvious when you read this site, but I'm not a very good planner. I tend to live more in the present than the future, and sometimes that bites me in the ass. Every single time the Chargers have hosted the "Bolt to the Q" 5K, I've managed to screw it up somehow with incredibly poor planning.

The inaugural Chargers 5K! I trained like crazy for this one. I was running 4 miles every other day leading up to the event. I even ran the Carlsbad 5K a few months prior to make sure I knew what I was in for. This was lining up to be a good day of running.

And then, the night before, I went out for sushi with some friends. I ended up drinking sake. A lot of sake. I ended up going to bed around 3am, with an alarm set for 5:30am to get up and go run.

Long (disgusting) story short, I was very ill while running. I still don't know how I finished the run, but I did. That morning is about the closest to death I've ever been.

Official Time: Faster than Marcus McNeill! (Apparently the official results for this race are no longer on the Chargers 5k site, but I took great pride in beating Marcus)

I wasn't sure I was going to run in 2012. I didn't think I knew anyone else that was running, and I wasn't sure about doing it alone. Due to this, and my brilliance, I decided to keep up my half-a-pack-a-day smoking habit while I waited to make up my mind.

I decided to run. I bumped into a few people I knew. I coughed and wheezed my way through the race. I got dirty looks from other runners when I lit up a cigarette in the Qualcomm Stadium parking lot afterwards.

"Next year I'm either getting my shit together or I'm not running at all," I remember telling myself.

Did I mention that I'm a poor planner?

When July rolled around, and the group responsible for putting on the event contacted BFTB about having the editors run the 5K, I hadn't run at all in four months. I decided to run it anyway.

I ran once last week to test my legs. The next day, I could barely get up stairs. I ran again on Saturday, thinking that it was Friday and I had a day to recover, and only realized my mistake after going hard for three full miles. 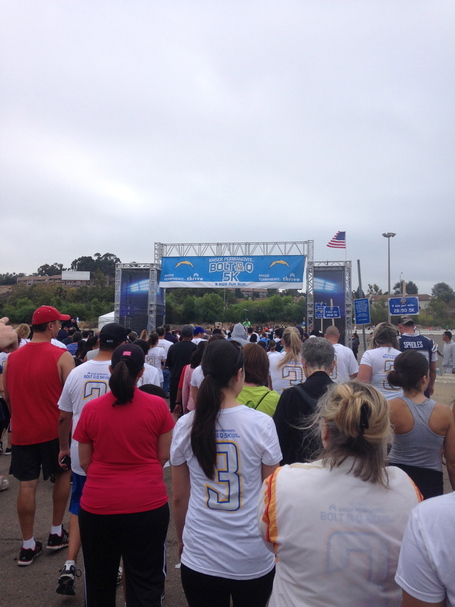 By the time I had received my tag and was waiting for the race to begin, my stomach wasn't very appreciative of my decisions the previous night. Suddenly, 2013 felt a lot like 2011. 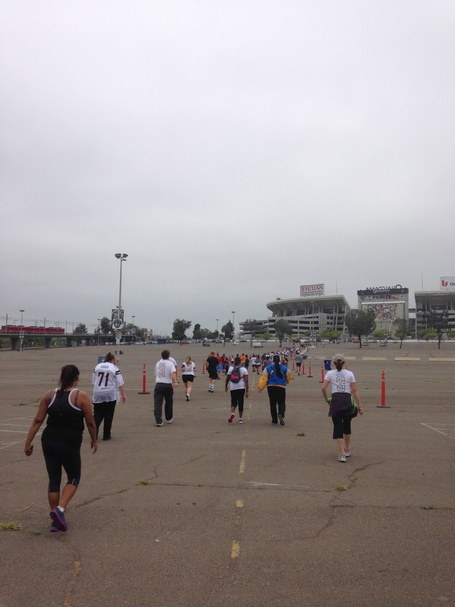 Thanks to a new, much easier course, I actually survived. My stomach manned-up, leaving me with nothing but the searing pain from my legs that had run 3 miles the day before after going mostly unused for four months. 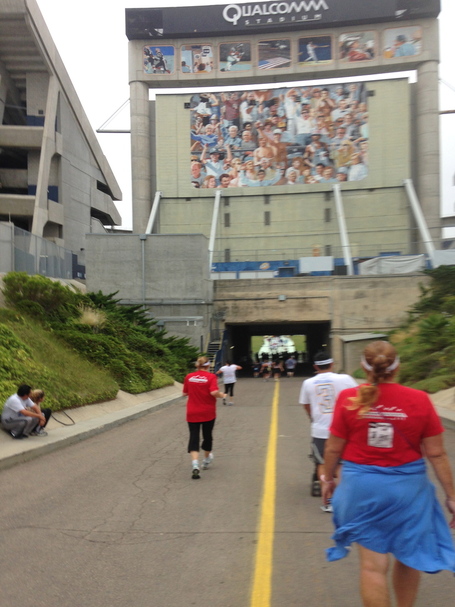 This point right here, when you're heading into the tunnel and about to hit the field, is where I lost it in 2012. I was cranky. I could barely breathe. I was walking and some guy, standing on the sidelines, said "No walking! You're so close! Don't give up now!" I'd rather not relive my response to him. Let's just say that it wasn't nice or friendly. A few people around me may have audibly gasped.

This year, I was intent to power through this area to avoid the sideline coaches. I walked a bit through the race, but once I hit the parking lot I was able to stay at a pretty decent pace all the way through the finish line. I even jumped and did a really terrible pose in front of one of the cameras at the end (I hope the guy didn't snap a picture). (Editor's Note: He didn't! However, he did get some truly terrible pictures of me when I stuck my tongue out at him.) 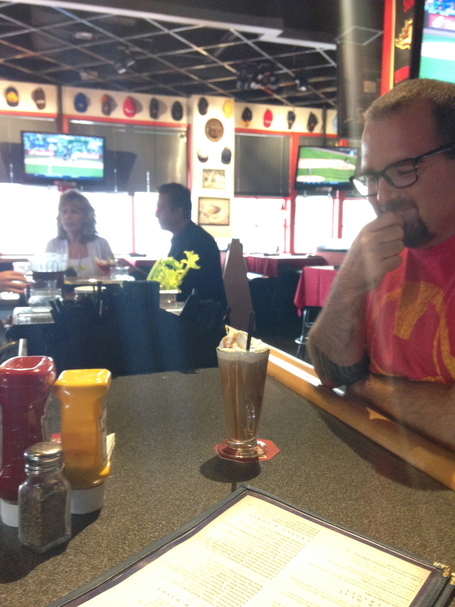 After the race, the BFTB editors (and Patrick) went to Randy Jones' All-American Sports Grill for some BBQ and alcohol. Once Richard found some awful drink called "Maple Coffee Delight" on the menu, it had to be ordered....and I had to drink it. This is me regretting my decision, yet again.

For those that are wondering, it tasted like Amaretto. I dislike Amaretto. I hope next year's comedy of errors, which will undoubtedly be caused by my poor planning and decision-making, doesn't include Amaretto.