A look back on what everyone had to say two years ago, why Eric Weddle was such a safe bet for the San Diego Chargers and how he stacks up against Ed Reed and Troy Polamalu.

Remember when the San Diego Chargers signed Eric Weddle to a five-year, $40 million deal, which then was reported inaccurately as the most lucrative contract for a Safety in NFL history? Of course you do.

I'm sure you also remember that the general consensus at the time from around the NFL was that the Chargers massively overpaid for Weddle's services. Just in case you need your memory freshened up a bit, here's what was said after the news broke: (There's an underlying lesson here, by the way: the Internet is forever, folks.)

@SKiNNyDuZiT I'm not angry to have Weddle back. But $8M and not getting your veteran LB back in return, steep price for an average player

Score another one for Jerome.

@BobbieL_AZ did you really expect @sdutChargers to say weddle was overpaid? again, more power to eric. but he's not an $8M/yr player. #nfl

i wish i could write what players are saying about the weddle deal. really, i do.

It needs to be said here, so I'll say it: Jealousy is a basic human instinct, so I'm not too sure we should be putting much stock in what other players have to say, Jim.

Warren Sapp's take on the Weddle deal. RT @QBKILLA: 8 Million a Year For a Safety You Couldn't Pick Out Of a Line-up!!

Now, before we move on, I want to give credit where credit's due to at least one person.

A playmaker deserves that contract. So far, Weddle hasn't been. But Chargers believe he can take that next step, and I believe they're right

Good for the kid; I'm sure Poppa Acee is so proud.

More importantly, however, Gehlken's tweet raises a question: what exactly made the Chargers so confident in Weddle that they were willing to bet $40 million on him taking "that next step." Let's explore it.

First, I should explain the stats I'm going to use before I get into it. (I know these might be self-explanatory and commonsense for some, if not most, of you, but I'd rather err on the side of caution.)

There's couple problems with relying on interceptions and passes defended alone to evaluate a defender's impact on the passing game. First, you can't intercept or defend a pass if one is never thrown your way. Second, interceptions can be a little fluky at times. These stats provide us with a more accurate and complete picture of a player's skill.

Although it's often thrown around as proof of effectiveness, a player's total tackles isn't really a great indicator of their impact on the run game. The above two stats provide us with a superior alternative and tell us how many of a player's tackles against the run really, really counted. Simply put: a tackle made 40 yards down the field shouldn't be viewed the same as a tackle made at the line of scrimmage on third down.

So, again, why did the Chargers believe in Weddle? This might help to explain it: 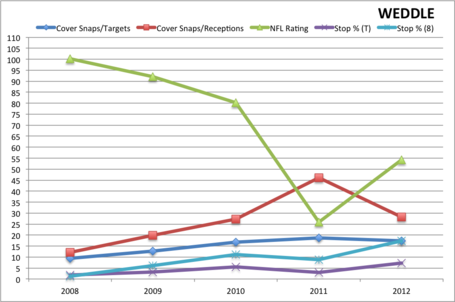 Every single one of those numbers prior to the 2011 season were trending in the right direction - and they continue to do so. Now, I've omitted his "yards/cover snaps" data from this graph because it would be a little hard to see, but let me assure you that those numbers tell the same story: Weddle wasn't really a risky bet for the Chargers. They were seeing him improve every single season and it all suggested that things were bound to click sooner or later. And as we all know, it did in 2011.

Not bad. Lots of first places. This impressive showing caused ProFootballFocus to give Weddle the third-highest and highest grade amongst all Safeties for the 2011 and 2012 seasons, respectively. In fact, their grade in 2012 for him was the highest they've ever given to a Safety.

So, is anyone still willing to raise their hand and say that Weddle is overpaid now?

I didn't think so. I'll leave you all with this:

Eric Weddle just got paid BIG money to stay in San Diego. Stunned they shelled that kind of money out for him. He ain't Ed Reed or Troy P!! 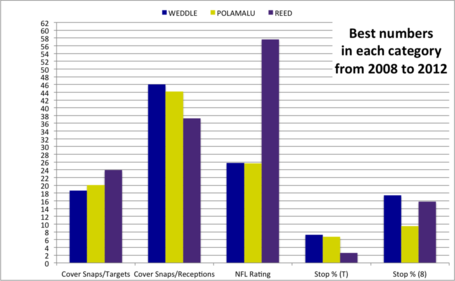