So it's the offseason, and the BFTB staff is going to go back through a few of the last drafts. Fun, right? Ask yourself: as an idiot redhead staff writer, what do you?

The Chargers promoted Butler's assistant GM AJ Smith — then famous for his nearly unlimited Tommy Bahama shirts and not yet famous for his actually unlimited scowls — to the big GM chair. Obviously, that made it AJ Smith's first as the GM of our Bolts. It showed. The draft was not good. However, it's not fair to examine the 2003 draft without visiting the tragic circumstances surrounding it. (Legend has it that the Bolts did not make a single change to the departed GM's original draft board. As your honorary Captain Hindsight of the moment, that may have been a poor choice.)

This is beating a dead horse. Needing a defensive tackle and with "all the good ones" off the board, the Chargers traded down from 15th to 30th in the first round. Then they drafted a corner, another corner and a safety with their first two picks.

This was a good strategy because the Chargers defense at the time was pretty terrible. That is about as complimentary as you can get about the first three picks that year.

By trading down, the Chargers ended up bypassing such talents as Troy Polamalu, Nick Barnett and Willis McGahee. To add insult to injury, with the 31st choice, the Raiders drafted Nnamde Asmuagha. I know it's easy to play hindsight games in the draft, but damn, that is a lot of talent and this was a wasted pick.

Sammy Davis was awful. He looked lost in coverage, couldn't tackle and only lasted with the team for three years. They basically couldn't get rid of him fast enough.

Sidenote: The Patriots drafted Asante Samuel 160th overall in 2003. Think about that while you're stewing in AJ hate.

Grade: D-, only not an F for extenuating circumstances around John Butler (#ThanksAJ)

With their second pick, the Chargers again went with a defensive back: Drayton Florence out of football factory Tuskegee. Drayton actually had a several–year career with the Chargers, starting out as the nickelback and #2 cornerback behind Quentin Jammer.

That said, Drayton's infamous head butt, which prolonged a drive against the Patriots, turned out to be the last in a series of incredibly stupid mental mistakes (Marlon McCree, anyone?) and ultimately sealed the loss in a year that may have been the Chargers best chance at a Super Bowl.

You can't win them all. Unfortunately for the Chargers in 2003, they couldn't really win any of them. In trying to fill the shoes of the great Rodney Harrison, the Chargers fell in love with a big, hard–hitting and slow–footed safety from Texas. Sadly, he was not good at football. Terrence played only four seasons of professional football, all with the Chargers. Struggling in coverage and not nearly as good against the run as anticipated, Terrence didn't make much of an impact on the field.

But off of it? Different story. It's not fair to talk about Terrence without at least acknowledging his off the field problems. First, in July of 2003, Terrence was shot three times during an alleged attempted carjacking incident at a southwest Houston mall parking lot. Obviously, that's not really Terrence's fault, but it was unfortunately a sign of things to come.

In 2006, he was arrested for possession, possession with the intent to sell, and transportation of a controlled substance. He was caught with a substantial supply of codeine cough syrup, the active ingredient in what rappers affectionately refer to as Purple Drank. Worse, he was arrested at Chargers practice. That had to be embrassing.

To prove that he learned very little, Terrence got himself arrested for peeing in public the very next summer. He eventually plead guilty to the drug trafficking charges, and was cut. Tragically, Terrence's life ended just a year later when his car struck a wall and he was ejected in the crash. RIP, Terrence. Hope you found the peace you needed.

For reasons both that started as merely troubling and ended up being tragic, this was not a good draft pick by the Chargers.

Grade: D-, the Chargers didn't get much on the field from Kiel, and got a lot more than they bargained for off of it.

In looking at this draft, it's not unfair wonder if Chargers scouts randomly came upon some film of Arkansas-Pine Bluff and said "HOLY SHIT IT'S BIGFOOT!" Courtney Van Buren — who I always referred to not–so–cleverly as Count Van Buren — is a mammoth of a man, standing at 6 foot, 6 inches and weighing in at a whopping 350 lbs.

So he at least looked the part of an NFL player. Unfortunately, that's where the comparison ends. Count VB played in only 9 NFL games across four–year career due to having human knees that weren't strong enough to support the wooly mammoth body they were attached to. Seriously, look at the guy. No, those are not shoulder pads. He's just that big. 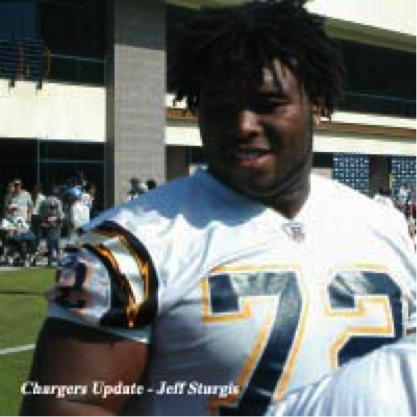 The reasoning behind the pick was sound. Courtney is huge and tested well at the combine, where he ran a 4.71 40, the second fastest of any Offensive Lineman that had ever tested at the time. He was also a track star at the shot put (what, you thought he was a marathoner?) and won eight individual championships in indoor and outdoor track & field during college.

So why did he fall? Mostly because Arkansas-Pine Bluff is not identifiable by 100 out of the 100 people that I just invented to give a fake survey to. I believe it's somewhere in Arkansas.

Grade: C-, a good attempt to find an offensive lineman on the cheap, who was never able to show what he could do on the field due to injury.

I loved Matt Wilhelm. A little undersized at 6-4, 245 and a little slow — running a 4.8 forty yard dash, which I believe at least Jerome and Patrick could still beat tomorrow — Matt was all heart. A true effort and instincts player, Matt was always around the ball, even if it was only just in time to hop on the pile.1

Throughout his career, Matt was solid depth to the Chargers Inside—Linebacking corps with his best year coming in 2007, when he replaced the departed Donnie Edwards and recorded 97 tackles, recovered one fumble, and intercepted 3 passes.

Grade: B, linebacking depth is great, but you'd like to find more high in the 4th round. Matt was a starter for 2 years, so that's something.

By FAR the best pick in 2003, Scifres has punted at a near–Hall–of–Fame–level during his time in San Diego. Despite having Chargers All–Timer Darren Bennet on the roster, the Charges selected Scifres with a very high pick for a punter. All he's done since is be selected a Pro Bowl alternate 3 times.2

Most notably, Scifres' punts in the 2007 AFC Division Championship game were incredible, with an average of 51.7 yards over six punts. All of Mike's punts in this game were downed inside the Chargers' own 20–yard line, with 4 inside their 10–yard line. That's Game MVP level play from a punter!

Grade: A, even though he's a punter, Mike has been an impact player for the Chargers for his entire career.

Mining for gold in the 6th round is never a bad thing. Drafting big guys that are fast and love to hit but who may lack a true position is a worthy gamble here. Hanik Milligan was one such gamble, running a 4.5 forty with a 36.5 vertical leap. The 3rd all time leading tackler from a school never known for defense, Hanik was a little bit of a shot in the dark. Unfortunately after being drafted, Hanik had the bad sense to immediately get injured, missing his rookie season due to a pectoral injury he suffered in pre-season.

Again, the rationale was sound. Big, tall, fast and strong, Hanik was another small school prospect, hailing from the then–not–awesome–to–watch University of Houston.3 He eventually ended up seeing spot time on the Chargers Defense and performed adequately, leading some to even suggest he should be given a shot at becoming the starting strong safety

While unrefined in coverage, the skills of being really big and really fast led to Hanik becoming a special teams demon, where he recorded 19 (!) tackles (16 solo) on special teams in 2004. He was named to the Pro Bowl and All Pro teams for his efforts on special teams, and then unceremoniously cut by the Chargers when he wanted more money for it. In a way, Hanik paved the road for eventual all-around awesome human being Kassim Osgood, so thanks for that Hanik.

Grade: B-, can't nag the process, and getting an All Pro year out of a 6th–round selection is a pretty solid showing.

A fullback/running back hybrid at the University of South Carolina, Andrew was the first in what has turned out to be a long line of fullbacks that could not make us forget Lorenzo Neal. He had a fairly forgettable career. Although he did get to try learning from Lorenzo Neal (aka Fullback Jesus), a man who I may or may not have a built a shrine to in my closet (don't look there, Katie!)

Grade: C+, when your 7th–round selection makes the squad, that's usually a sign of a combination of two things: the first being that he's a pretty decent football player and the second being that your team sucks. Andrew was a little of both.

Also check out ESPN's draft grades, if only for the formatting lulz. The Chargers received a B-, with ESPN singling out Hanik Milligan as a value pick.