A History of the San Diego Chargers, Part 10: "The Nightmare Season"

The Hadl Era of Charger quarterbacking ended. The team traded for a legend, Johnny Unitas, to come play for the 1973 Chargers. Svare’s “rebuilding” program comes to a horrible end as a drug scandal during a 2-11-1 season bottoms out the team.

Share All sharing options for: A History of the San Diego Chargers, Part 10: "The Nightmare Season"

As bad as the team’s drafts were from 1964 through 1972, nothing topped the failure of their first round pick in the 1973 draft. Despite their dismal 4-9-1 record in 1972, trades left the Chargers picking 25th overall. Picking that late, the team missed out on the chance to draft Chuck Foreman (RB-Min), Sam "Bam" Cunningham (RB-NE), Isaac Curtiss (WR-Cin), and Billy Joe Dupree (TE-Hou). All of these players had fine careers at their positions and were key players in their respective team’s playoff runs during the 70’s. Drafting 26th overall (right after the Chargers) were the Bills and they selected Joe DeLamielluere, a Guard that now has a bust in Canton.

With the 25th pick, the Chargers picked the 1972 Heisman Award–winning RB/KR from Nebraska, Johnny Rodgers. Rodgers, perhaps getting wind of just how dysfunctional the Chargers were, elected to play for the CFL’s Montreal Allouttes instead. When his attitude and demeanor got him waived off the CFL team in 1976, he reported to the NFL team that owned his rights. In Rodgers' two years with the Chargers, his total stat line was 599 kick return yards, 49 yards rushing, and 243 receiving yards. (No, I did not leave out his TD’s. He had none.)

The team continued its trading of just about anyone with value on the roster and the acquisition of older free agent players. The big news was the Chargers trading for the legendary Johnny Unitas. Some of the local writers, understanding why John Hadl had left after the 1972 season, believed that "Johnny U" had a good season or two left in him. The hope was that Unitas could mentor the Chargers' next great QB, perhaps the kid out of Oregon drafted in the 3rd round, Dan Fouts. 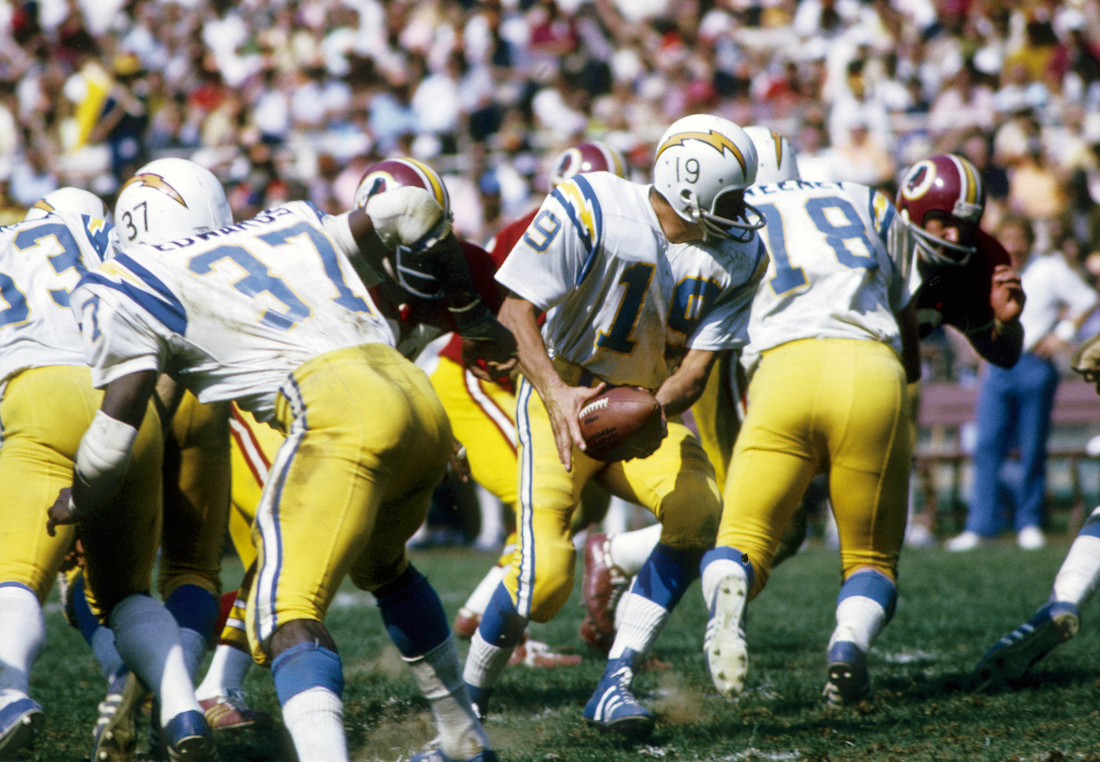 Johnny Unitas started at QB for the first game of the season, a 38-0 loss to the Redskins. The legend passed for 55 yards with 3 INT’s and was sacked 8 times. The next game against Buffalo worked out better, with the Chargers coming out on top 34-7. Johnny U broke the 40,000 career passing yard mark in the 3rd game of the season, the first QB to do so.

Unitas, clearly with nothing left in the tank, nearly immobile, and with questionable ability surrounding him, accomplished little else in the last season of his career. He was benched during the season’s 4th game after going 2-for-9 with 2 INT’s and 19 passing yards against the Steelers. That game was the last in his career.

He was initially replaced by Wayne Clark, who did not complete a pass in 5 attempts. Dan Fouts started the second half of the game that was already a blowout, against a defense coached by the architect of great Chargers defenses in the early 1960's. 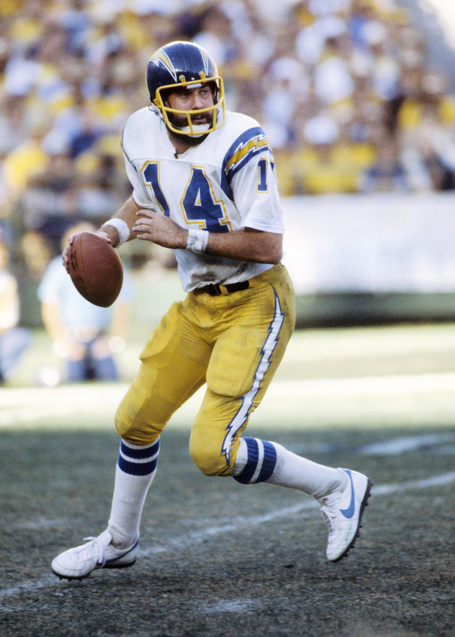 Fouts started the 5th game of the season and would start seven after that. His season stat line was far from impressive: 44.8% completion rate, 6 TD’s and 13 INT’s for 1,126 passing yards and a Passer Rating of 46.

The team’s home games in October, which included a 41-0 loss against the awful Atlanta Falcons, were highlighted by chants of "FOUR MORE YEARS!--FOUR MORE YEARS!" from the few diehard fans that were there. Svare drove out of the staff parking lot after the Atlanta game through a mob of Charger fans throwing beer bottles at his car and screaming obscenities.

Somebody took an ice pick to Svare’s car tires in a restaurant parking lot while he and wife were eating dinner after the Kansas City game, a 19-0 loss. Svare stepped down as head coach after that game, but he did retain his GM job. The team went 1-5 under interim Coach Ron Waller, winning 17-14 at home on November 18, 1973 against the worst team in the league: the New Orleans Saints. Wayne Clark was the QB for that game; Fouts had been dinged up the week before.

Here are the lowlights from the KC game:

And Ron Waller’s only win as a head coach: (Check out the special team play at 1:40.)

As bad as the team was on the field, that was not what made 1973 "the nightmare season." The season got that name based on what happened off of the field, in the team’s locker and training rooms. It was also the title of a book published in 1976 that was written by a UCSD professor at the epicenter of perhaps the saddest chapter in the team’s history.

Amphetamines ("speed") — particularly Dexedrine and Benzedrine — had been commonly used in professional sports since at least the early 1950’s. The use of speed by athletes can be traced back to World War 2 when the US military provided "pep pills" (Benzedrine) to men in combat.

The Chargers were no exception. Guard Walt Sweeney, a 9–time Pro–Bowler recounted his drug use often after his career was over. According to Sweeney, taking speed was as much a part of his pre–game preparation as putting on pads, though none of this was known to the public at the time. The first real public exposure of what was going on in the Charger’s training and locker rooms did not happen until 1973.

Steroids and amphetamines were provided by the team’s training staff

Houston Ridge, a defensive lineman drafted out of SDSU in 1966, was injured during a game in 1969. Staying in the game, Ridge was unable to stand or walk on his own by the game’s end and an examination revealed that he had broken his hip. His football career ended due to permanent bone damage, Ridge became dissatisfied with the medical treatment he was getting from the Chargers. In 1970, he sought advice from Ron Mix, who was now working on a law degree; Mix referred Ridge to a lawyer. 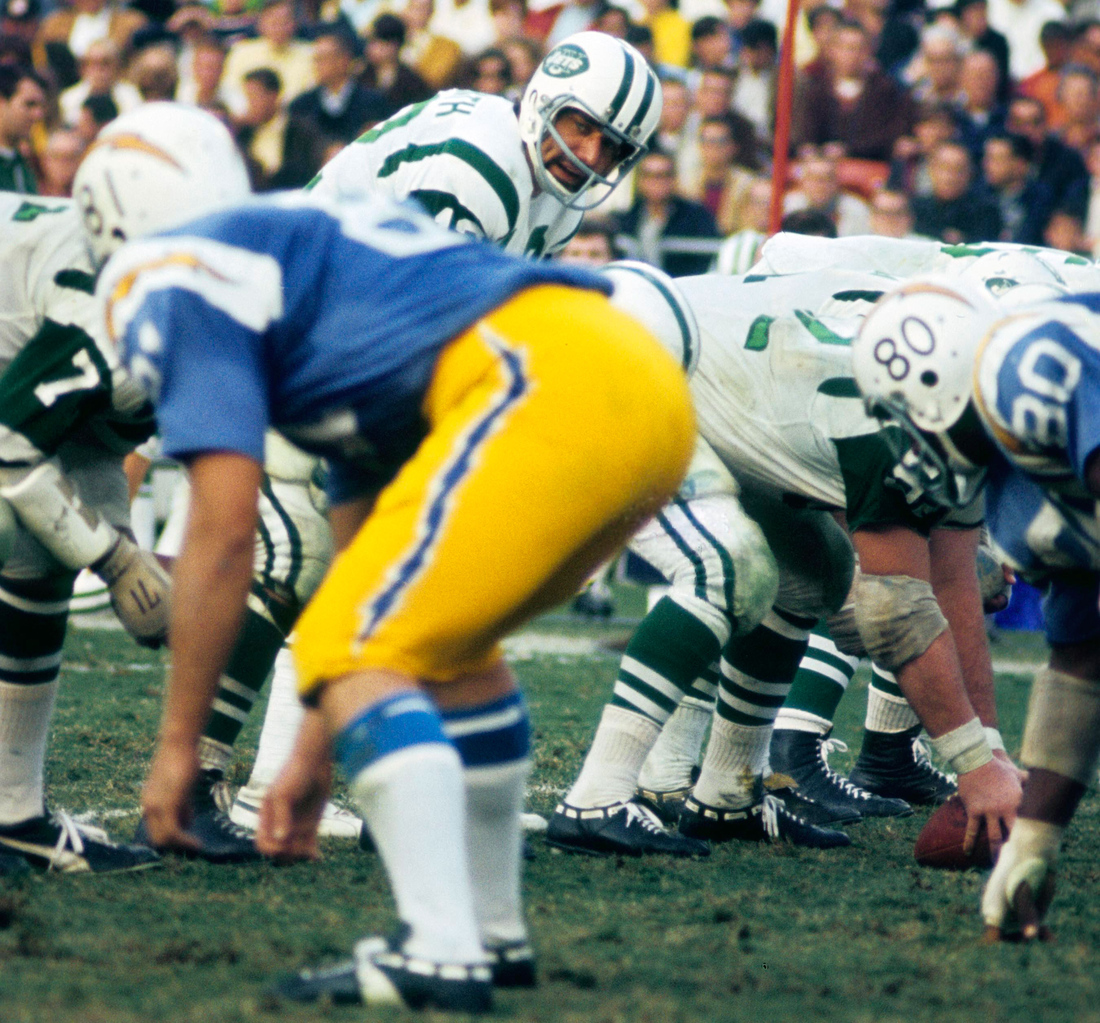 Ridge sued the Chargers in 1972 alleging that steroids and amphetamines were given to Charger players by the team’s training staff. The suit claimed the steroids made Ridge susceptible to injury, making the Chargers at least partially liable for Ridge being unable to earn a living playing football. The suit also claimed that being high on speed provided by the team during that 1969 game had made him unaware of how badly he was injured.

The Chargers settled the lawsuit for $265,000 in mid–1973. There were some depositions taken and testimony read before the judge mediated the settlement. None of the training staff disputed the claim that steroids and speed were being used by other players. In fact, part of the team’s defense was that other players were using the same or similar drugs in a similar manner and were still playing well (that last claim could certainly be disputed in the early '70's.) The team did deny that it was forcing the players to take the drugs.

Marijuana would "destroy their ability to play football"After the settlement with Ridge was reached, and with the NFL officially banning amphetamines in 1973, Klein publicly forbade the team’s trainers from providing drugs to the team "unless needed". "Unless needed" seems to have been broadly interpreted and the front office obliged with selective myopia on the subject.

With the Ridge lawsuit pending, Gene Klein asked a friend of his — a respected psychiatrist and professor at UCSD named Arnold Mandell — to "hang out" with the team in the middle of 1972. Svare, looking for anything that might help the team win more games, was enthusiastic about having a "team psychiatrist." Klein’s motives were probably murkier than appeared on the surface and likely tied to the Ridge lawsuit and Duane Thomas’ 1972 arrest for marijuana.

Gene Klein and Harland Svare for their part were concerned (almost obsessed) about the rumored use of marijuana by some Charger players. Mandell shared this concern and claimed to have told the players often that smoking marijuana would "destroy their ability to play football".

By all accounts, "Arnie" had total access to the players during practices, the locker room before and after games, and the sidelines during games. Mandell spent the 1972 season gaining the trust of the players and becoming part of the locker room landscape. He soon found out how pervasive the use of speed was in professional football and within the Chargers.

In 1973, Dr. Mandell began prescribing Dexedrine for the players to take before the games and Phenobarbital for them to take after the games. Evidence obtained later showed that 1,700 doses of controlled substances were prescribed to players by Mandell during the first few weeks of the 1973 season, with one player getting prescriptions adding up to 400 pills.

Drug use was "ruining the team"What possible reason did Mandel have for providing the pharmaceuticals? His later claimed that the plan was to back down the dosage of the drugs, with prescribed medication of known purity, and eventually wean the biggest abusers off of the drugs completely.

In the years following 1973, Mandell had his share of supporters and detractors. In typical fashion for the team in those years, his plan backfired in a comedy of errors and became a public scandal.

After the team’s 3rd game of the 1973 season — a 20–13 loss at home to the Bengals — Klein stormed into the locker room and started screaming at the players that their drug use was "ruining the team"; though he was referring to Marijuana at the time. Shortly afterwards, Klein contacted NFL Commissioner Pete Rozelle seeking advice. In hindsight, this was a mistake.

Rozelle, concerned primarily about the image of the league, recommended that Klein hire private investigators to document any problems that may exist. He promised league action if the internal investigation found anything. Accounts of the investigation are surreal, one player claimed later that Klein hired hookers equipped with microphones and recorders to infiltrate the team to gather information on the players.

Wire–wearing hookers aside, the investigators did discover Dr. Mandell’s systematic prescription–writing and concluded that Svare had "lost control of the team." This was a big reason, but not the only reason, for Harland Svare stepping down as head coach in the middle of the season. The investigation report was forwarded to the league office.

In early 1974, 8 players were collectively fined $15,000 and suspended by the league. Svare was fined $5,000 and the team (Klein) fined $20,000. GM Svare and new coach Tommy Prothro wasted little time in shipping the fined players, including Walt Sweeney, out of San Diego. Sweeney was the only remaining player from the 1963 championship team still a Charger in 1973.1

Dr. Mandell published his book, "The Nightmare Season" in 1976, so the scandal lingered for a while. Mandell was not charged with any criminal conduct, but did get sanctioned by the CA Medical Board for "over-prescribing" controlled substances. He kept his medical license.

The team had completed its slide into the AFC West cellar in 1972 and 1973. The nightmare season produced a 2-11-1 record, a team ripped apart by scandal, and the 6th coaching change since 1969. It seemed as though it would take a miracle or two to get the Chargers back to respectability, let alone into playoff contention.