Instead of this year's 1st-round pick, I'm looking back at where we were last year for this week's Football Sunday Collector post. Melvin Ingram, though part of the rookie class last year, still has cards that are quite affordable and are great additions to any Chargers card collection...

I'm looking back at last year's 1st round draft pick for this weeks The Football Sunday Collector post.

Last year the San Diego Chargers selected Melvin Ingram, a pick I was very excited about. I don't follow all that many college players but. lucky for me, Ingram (and Ryan Mathews before him) were on my radar. 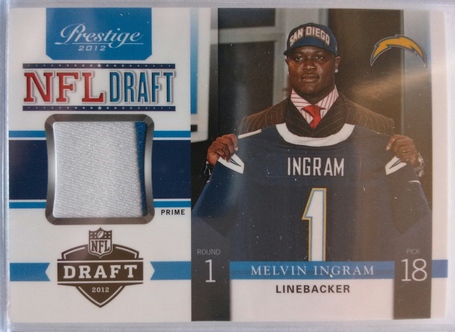 It's always cool to pick up a relic card, whether it be of a jersey or a piece of football, when there's more than one solid color in the swatch. It's not much, but that strip of the powder-blue at the right edge is why I picked this card up instead of letting it pass. You can still find these for around $2, shipped.

My intention isn't to reanalyze last years 1st-rounder. You already know his background, where he came from and what his pre-draft measurables are.

Additionally, John has already given the initial analysis and comparison of Ingram with Larry English. If you missed his post that went up on March 28th, check it out: OLB Comparison: Melvin Ingram and Larry English.

Instead, I'll show off a few of Ingram's cards that can still be had for super cheap, as in San Diego Super Chargers cheap: 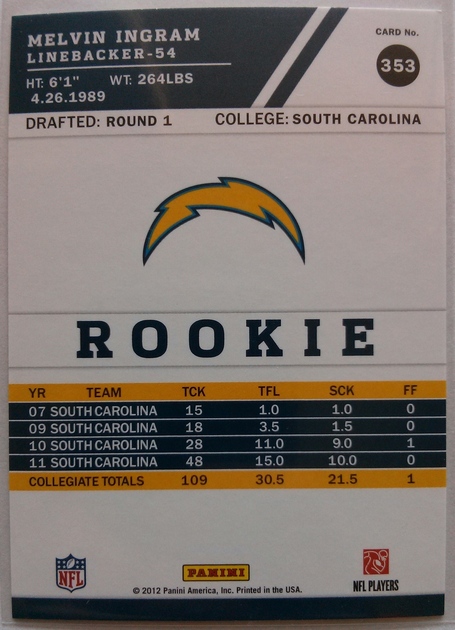 One of the great approachable rookie-card ("RC") series of 2012 was Panini's "Contenders" line. This autographed Ingram card can still be had for around $2-$4, like the relic card above. 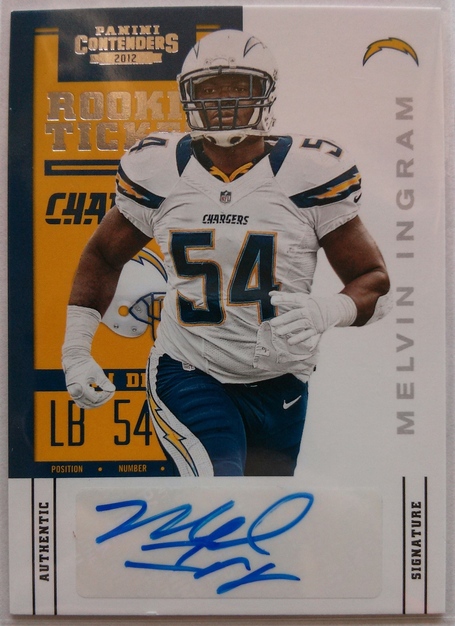 That's a pile of linebacker love, right there.

Ingram is a lovable linebacker kind-of-a-guy, actually. Look how much love he gives to the Raider's punt returner:

I believe that's Coye Francies who just got lit the hell up met Ingram. If that doesn't have you feeling warm and fuzzy right now, check your pulse as that's pure poetry in motion.

Topps also has a series of nice Ingram RC's. The Ingram's I went after are the Topps Platinum series, and there are a few versions.

The base card for #54, and the few variants based on it, are:

Ingram also has a number of on-card autograph cards. I had to complete my Topps Platinum fix with these, the same card, but noticeably different auto's: 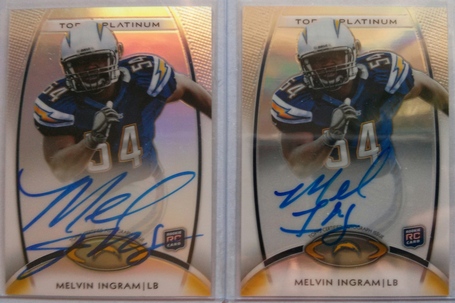 As I think back on following last year's draft and my hope for Ingram's immediate contributions, it was in the context of our current roster. So, let's go over a few additional cards from 2012.

And, you thought I'd really forgotten about tunes for this week, didn't you? Enjoy some Priest --- one of their greatest of all-time --- while you glance at the rest:

Score, a card-line owned by Panini, released a base series last year that featured good photography that was touched-up to have a soft, painterly quality to the cards. Not quite as "painted" as Topps Magic (I'll show off some of their cards in a later post), but good-looking, nonetheless. 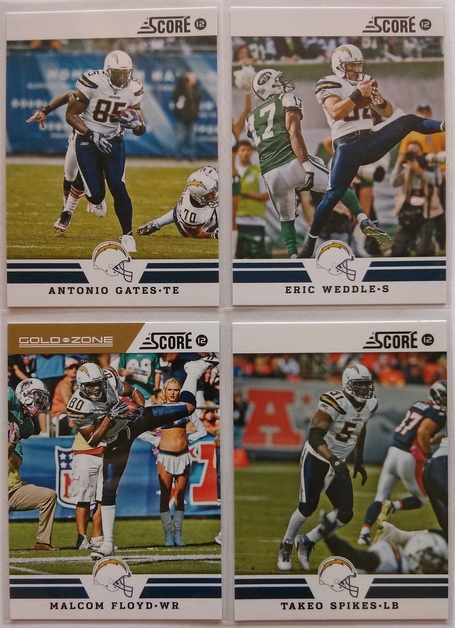 Ingram's card fits in with the bunch. 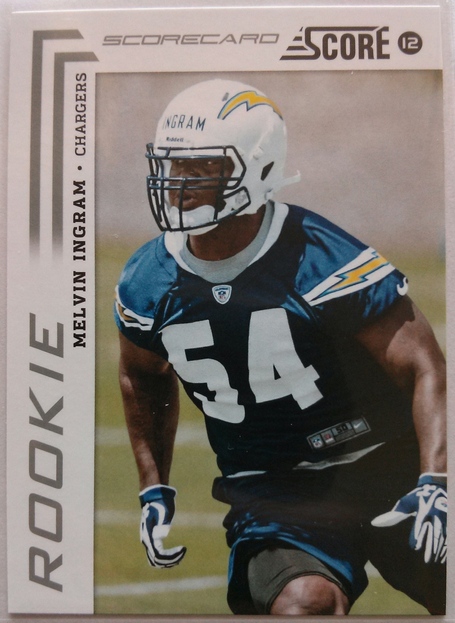 Whereas most of the cards have images from the players previous season, Panini must've waited just long enough to get this practice photo of Ingram instead of using a photo of him in his Gamecocks get-up.

The verdict is out on the potential value and intelligence taking Fluker 11th in the 1st round. However, with the 2013 draft now over, it'll soon be time to watch for the RC's hitting the market.

That's another perk of maintaining allegiance to the Chargers: as a card collector, most of the cards remain well within reason.

One more Ingram RC worth adding to your collection, and the newest addition to mine, is this 2012 Sage Auto with him in his Gamecocks crown: 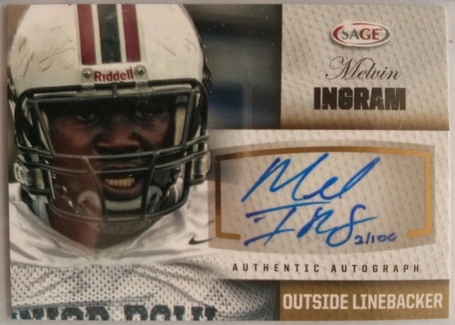