Collecting cards is all about the simple joy of obtaining pieces of cardboard. But, what happens when the collector feels up to more of a challenge? Enter the cardboard vortex that is the "Pentafecta"...

Share All sharing options for: The Ryan Mathews Pentafecta

I'd first come across the idea of the "Pentafecta" on another sports card collector's blog a few months back. "What is this, 'pentafecta,'" you may ask? Good question.

Collecting a pentafecta of cards for a particular player consists of obtaining five cards in the five following categories:

2. A relic card, for football cards this usually consists of jersey material or a swatch of pigskin from the ball

4. A patch card, like card 2. above, this is usually a piece of "game-used memorabilia"

As you can see, this affords the collector, most often times, quite a challenge.

For some players the rookie card can be obtained quite readily, yet the relic or autographed card may be seemingly impossible to find. For yet other players, the relics, patches and autographed cards may be ridiculously scarce, while the rookie, though available, can be prohibitively expensive. Nearly always the "1/1" card is a beast to be reckoned with, either in terms of price or availability, often times both.

One of the most maddening aspects of being a Chargers card collector (hence the name of my personal card blog: The Underdog Card Collector) is that while so many of the players on our roster may have great talent potential, we seem consistently plagued by injuries or just bad luck, watching some leave to go on to have super-star careers with other teams.

However, one of the great aspects to collecting the Chargers is that we have access to some phenomenal cards for much lower prices than some teams, comparatively. Don't get me wrong, this hobby can get silly-expensive, but when our starting running back has autographed-relic cards with low serial numbers (say, "x" out of 10 cards) available between $20 - $50, that's much more sane than those comparable cards hovering between $250 - $400.

Ryan Mathews is a case in point.

Though this is officially my second pentafecta completed (my first being my favorite athlete to collect, Mr. Tony Gwynn), this is my first football pentafecta.

Now, in full disclosure: I made a decision a while ago, when John brought me on as one of the new writers for Bolts From The Blue. I decided to leave most of my feelings for the players and lay analysis to our experts (when I watch "tape," it consists of a live football game, me passionately and in no way objectively engaging the drama). All I'm intending to do through The Football Sunday Collector posts is to share some of Chargers cards and memorabilia. Which means I'm not going to analyze Mathews play as there are others doing that better than I can. I'm going to confab about cardboard. With that, on to the cards... 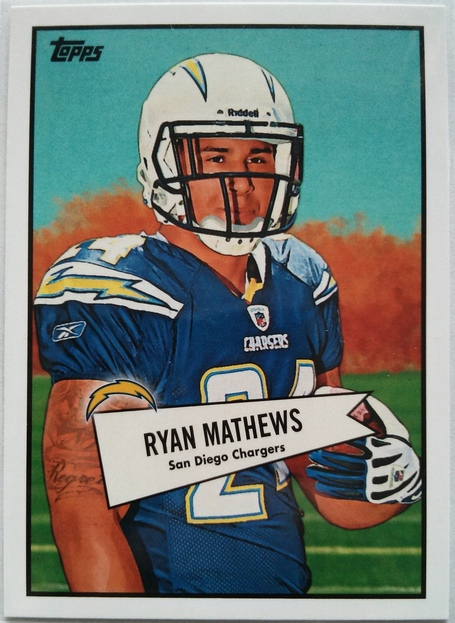 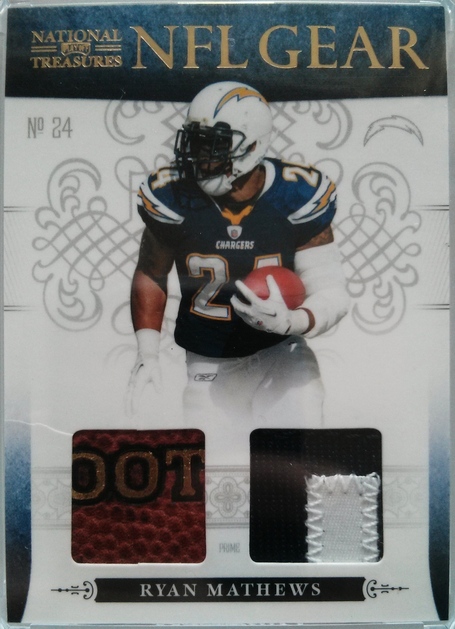 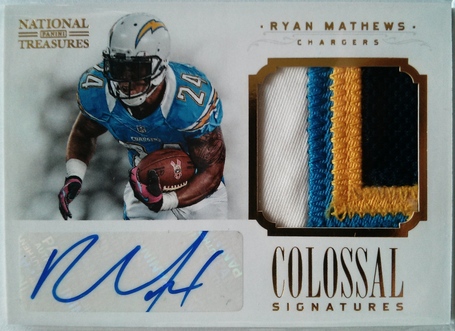 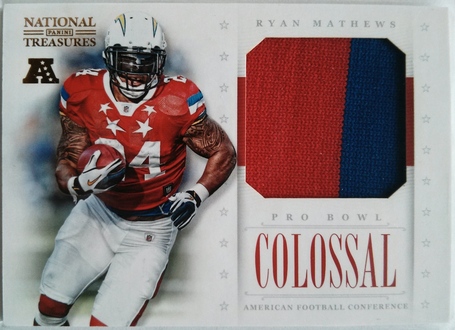 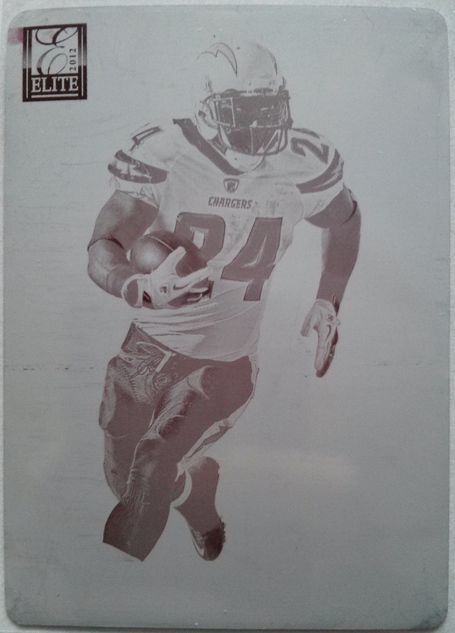 The rookie card above is fairly common and quite cheap. Though a simple "base card," it's copying the layout of the 1952 Bowman football cards and, because of that, it's got a great throwback, vintage look to it. Not a whole lot of '52 Chargers cards floating around (oh, yeah: make that none) so getting these contemporary nods to the older designs gets us as close as we can get.

The 2011 Panini marks my first leather relic for a football card and with the visible "oot," presumably from "football," that's a great find.

The third card, the 2012 auto relic, has 4 well laid out swatches, probably from one of the right-angles that make up the edge of the lightning bolt or a number on his jersey.

The fourth card comes from the National Treasures Pro Bowl Colossal series Panini released last year. Now, to make it very clear: I loathe the Pro Bowl. However, these cards feature two things I love seeing and collecting: players in their Pro Bowl jersey with mismatched helmet and big relics on cards. A few of these will be in an upcoming post so for now I'll leave this card at that.

Lastly, the 1/1 card. Most often times, these are the real challenge to building up a pentafecta. Here that was not the case. This "card" is actually the metal printing plate used to print the related card, in this instance card #82 from Panini's 2012 Elite set. This particular plate was used for the "magenta" process. There were actually several Ryan Mathews printing plates available on Ebay recently. I hand-picked this one, so to speak, as there is no background distraction. This plate just features a great RB pose and I really like the right-leg is cut off at the sock, disappearing into the plate (it's not on the card, at least not as dramatically).

So, there you have it, the Ryan Mathews Pentafecta.

I know a few of you are toying around with the idea of going through your old cards and possibly picking up a few new ones. Go for it! I'd encourage you to chase down a rookie card (RC) or relic card of one of your favorite past or current Chargers. These are special and often great looking cards and can easily start you off with a central piece to build around.

And, if you do, let me know what you find, even uploading the photo in the comments.

Cheers, and may the cardboard gods smile down upon ye!