Nick Shepherd shares his story of meeting Junior Seau on the golf course as a 8-year-old, and having milkshakes with the former Chargers Linebacker.

Share All sharing options for: My Junior Seau Story

One year ago today, beloved Chargers Linebacker Junior Seau's died. His death was officially ruled a suicide. He was 43 years old.

Typing that makes me hurt a little inside. You see, I've had 4 concussions. I've also struggled with depression.

My depression most notably reared its head during college when, one semester after sustaining a particularly gruesome neck injury that ended my football career, I hardly left my room and basically flunked out. Eventually, with lots of counseling, hard work and some truly unbelievable support from my family and friends, I made it back to college and graduated.

I don't claim my concussions and my depression are/were related, but it does scare me every time I read about post concussion-syndrome and the latest football player affected.

That being said, today is not a day to remember how or why Junior died. Instead, let's remember how he lived. I was lucky enough to meet Junior when I was about 8 years old. Here's my Junior story:

It was Sunday in January. My father, mother, little brother Scott and I had all gone out to play some golf because we are WASPs and that's what we do with our spare time. Junior was playing in the group immediately behind us.

Again, I was 8 years old, and my brother is about two years younger than I am. Needless to say, our golf games weren't great. Every time we looked back and saw the Incredible Hulk of a man that Junior was behind us, we felt like our slow games might be pissing him off. It didn't. Mostly because Junior was having a blast and a little on the carefree-side with his game.

Something you need to know for this story: Junior could hit it a mile, but he had almost zero idea where the ball would end up. More often than not, he'd trust the terrible-ness of his game and just hit it at the green even if we were putting. Usually this wasn't a problem because Junior's ball would end up nowhere close to the green. We'd hear Junior laughing at himself from more than a hundred yards away, and my dad would ruefully shake his head while suppressing a smile.

Everything was great.....until it wasn't.

By the 9th hole, Junior had hit into us maybe 4 times. He'd only come close once, but then he finally STUCK his iron shot on the 9th hole, an elevated green obscured by a steep hill. We could hear him hooting, hollering and having the time of his life about it from the fairway, but we couldn't see him.

This would normally have been great. Except my mother was putting. Junior's ball landed about 4 feet from her.

My dad was pissed. Junior came jogging up the hill, a look of concern on his face.

"Everyone ok here?" He boomed out, because he's massive and just hit his best golf shot of the day.

Junior saw what had happened and, without a word, scooped up my brother and I in each arm. He yelled back "Pick up for me, ok?!" to his group while determinedly striding away from the green.

My brother and I ended up on his shoulders as he carried us to the clubhouse shouting, "Who wants milkshakes?!"

Junior bought us those milkshakes, hung out with us for about an hour, and even signed my San Diego Padres hat (although he said, "You better have the right team next time, buddy.")

When an older person asked him for an autograph, he consented, "Only if my friend here signs it, too." He meant me. My signature did not look great on that person's golf hat.

I'll never forget that day, or how kind Junior was to a few kids that held up his golf game. So let's remember Junior together today. What's your favorite memory of Junior? Do you have a favorite story (or better yet, video)? If so, we want to see them. 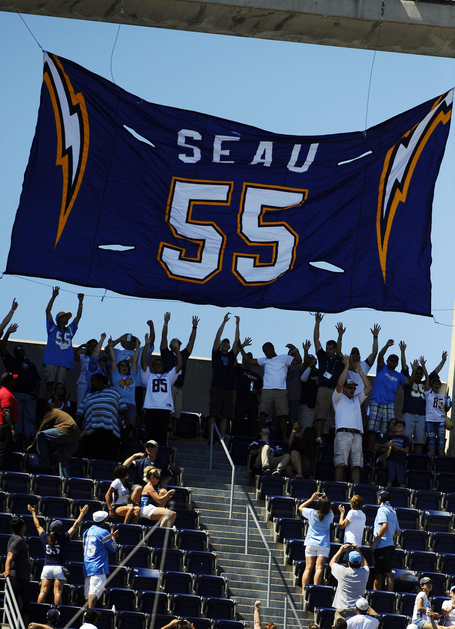