Breaking down plays that are most illustrative of what Ryan brings to the table and what he takes away.

In my last Ryan Mathews post, We took a look at a few cherry-picked examples to show how many yards Ryan will, at times, leave on the field. The post admittedly didn't go into enough detail on the yards Ryan is able to manufacture on his own. With this in mind, we'll take a different approach to the next game on the schedule, the New Orleans game.

The "nice" thing about this game is that Ryan was firmly entrenched in Norv Turner's doghouse for fumbling problems. Despite clearly being most talented player on the field, Norv gave Mathews so few touches that it is possible to break down every single one of his runs. I can't get them all made into GIFs for both editor sanity and legal reasons, but I broke down plays that are most illustrative of what Ryan brings to the table / what he takes away.

This play shows why Mathews is a such a tease for us. Ryan gains 10 yards all by his lonesome with a great cut. He moves to an angle which forces the D to make an arm tackle - which he breaks. Great run by Ryan. Let's give him a +10 yards here.

And then he gives nearly gives those yards right back on the very next play. We'll call this one a -8 yard read by Ryan, but it could be even more...

On the very next play, a 7 yard pass to the left side, Ryan takes the ball and moves immediately to the correct / obvious hole. He doesn't break a tackle, but does exactly what he's supposed to do. As most running backs in the league would have the same result, we're going to tally this one as 0 yards gained or lost by Ryan.

Then, the very next play, Ryan has arguably his best run of the day.

Just when I thought you couldn't possibly be any dumber, you go and do something like this ... and totally redeem yourself!

With a great read and cut, Ryan picks up 9 yards all by himself. Nice run, kid.

All blocking. Look at the lane here. 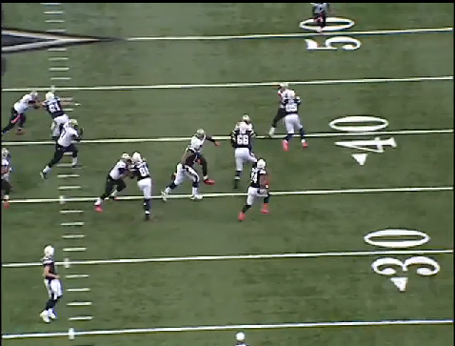 Ryan will (generously) get a +3 here for breaking a tackle near the end of the run.

This one, again, is all Ryan. He breaks a weak tackle attempt behind the line and moves through the muck in the screenshot below, running hard and falling forward. We're calling it +12. 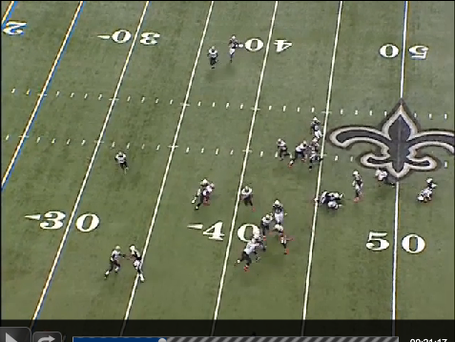 Nothing special good or bad here. Not even screengrab worthy. He just takes the yards on the field. His next few plays (runs of 4 and 0-yards, and an 11–yard reception) are similar and we don't need to examine them here.

A nice play but again, something that's expected of a NFL running back when put 1v1 against a DB with room to run.

That run is here because I love it. Although he doesn't do anything out of the ordinary until the dive, Ryan takes a pre-snap hint from LeRon McClain, who points out a NO blitz that will leave them vulnerable to the outside. Then he's just an athlete. So fast, so powerful and he adds an 8-yards-in-the-air dive to cap it off. Even Ryan's harshest critic (me) has nothing negative to say here.

That's by far Ryan's worst run of the day, and it's getting marked down as a -8 yards.

Still the result is there, and Ryan took this play to the right hole. He just looked really stupid while doing it. End result: Ryan's WoW character loses -8 awareness, but he leaves no yards on the field.

Oh boy. Ryan had a pretty good game so far, so you knew we were just due for something really, really stupid. Look at this play: Ryan's got the open field with a blocker, and still manages to be tackled by the first guy. The smart play here is to use a stutter step, freezing the inside pursuit and allowing Hardwick to get his hands on the cornerback. Once he does, Ryan's got an entire world of yards to the outside. This single play leaves about 15 yards on the field. Ouch.

In what was probably Ryan's best game of the 2012 season, he had so few touches that someone as overly blathering as me can break down every single one in under 1200 words. That's a good thing - it means Ryan mostly took the yards that were given to him and stayed within himself. That said, a few really dumb plays left yards on the field, and Ryan gained 1 yard over what an average running back in the league would, given the holes and his opportunities. Included a spreadsheet below that includes the total grades for each of Ryan's touches.

Don't worry. There are many more carries and thus many shovel-loads of dirt remaining to bury this dead horse.