My Favorite Chargers Fan: A Tribute To My Dad

Since starting The Football Sunday Collector posts I've been looking forward to introducing cards from the Coryell era. Today, the anniversary of my father's passing, I'm paying tribute to my dad's memory with a few cards he'd love to see again...

Share All sharing options for: My Favorite Chargers Fan: A Tribute To My Dad

For the past couple of years today, May 14th has proven to be a particularly hard day for me. No, not just because the NFL Draft is over and we're in the middle of a bit of an NFL black-hole, though that doesn't help any.

Today is the anniversary of my father's passing away and, not out of his 50's, he went way too young. 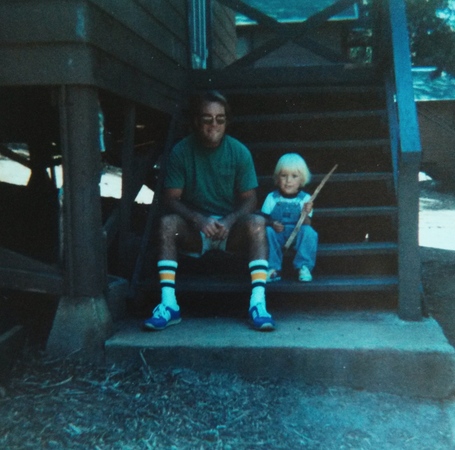 My dad loved the outdoors, even rocking what I called his "Super Charger socks"

It was my father who introduced me to the game of football in general and the San Diego Chargers specifically.

He'd moved to San Diego as a wee lad from northern Ohio, young enough to have never formed an allegiance with the Browns. I quickly learned from my dad and grandfather, first and second generation Irish-Americans, that we preferred the hard-hitting football to the more gentle game of baseball (something my maternal grandfather would take over teaching me the subtleties of).

Like any father-son relationship, we had our share of good times and challenging times. Yet, it can be bittersweet, the loss of one's loved one's, in that it can refine those memories. I'm thankful it's the sweet memories that shine for me thinking about my Pop. 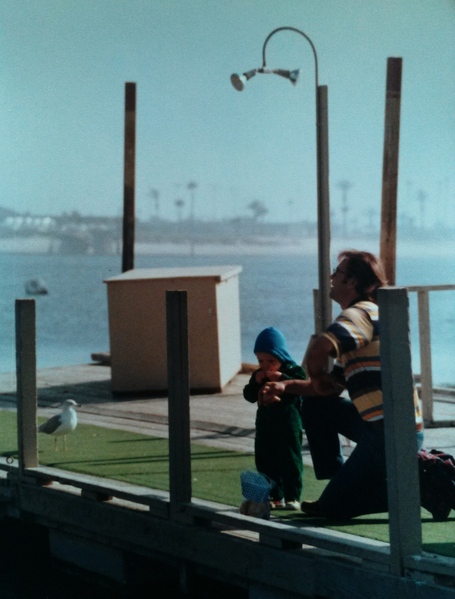 Me & Dad feeding the birds on the bay

By the time I was six years young, my dad was taking me to the Chargers home games where I would sit between him, my grandfather and an uncle of mine. This would be a ritual that would continue for another six years before we moved away from San Diego for a couple of years.

These were the formative, "glory" years of my learning about football: Passionate allegiance, the Coryell era greatness along with (un)healthy doses of agonizing defeat. My dad taught me all of this, and more, of course. When watching the Redskins trounce the Donkey's at Jack Murphy in Super Bowl XXII (oh, how sweet), I could only play Zelda on my NES during the half-time show for fifteen minutes because. on this day, video games took a backseat to the drama unfolding on the television.

Later on I would learn my father and my grandfather knew Dan Fouts. My grandfather sold cars to many of the Chargers' staff and players during that particular era and my father would, on occasion, have a beer and throw darts with Fouts. As a child I would meet him and my father would tell me to "shake his hand, Zach." To this day I remember seeing Fouts in sweats before a game, meeting him near the tunnel, and I know that plays into him being a hero of mine as he appeared as a giant among men at that time.

As my grandfather was about to celebrate "60 something," my dad had intended to have Fouts sign a $100 bill for my grandfather, wishing him a happy birthday. As the story goes, my dad was playing a bit of darts with Dan and started to lose, which seems to be a natural outcome of challenging a quarterback in the NFL to a game of throwing anything. You can probably see where this is headed...

After several rounds of beers and darts, my dad lost his $100 to Fouts. After all was said and done, my dad had a lousy, crinkled up $20 left in his pocket.

Nevertheless, one of my prized "heirlooms" from my dad is still framed and hangs near my desk:

If you can't make out the ballpoint pen it reads:

My grandfather was Jack Sr. and my father Jack Jr. so this has all the associations necessary for me to treasure this bit of family and Chargers memorabilia. It's enough to bring a smile to my face any day. Especially today, when my dad would have been at "#60 something."

My dad's favorite era of the Chargers was the ten-year period from roughly 1977 through the 1987 season, the pinnacle being the Coryell era ('78 - '86). I'm sure part of the magic of this era for him was having me, his first child born during that time because he was finally able to instill the passion to the next generation. This is my favorite era as well, due to the magic of sitting on the 50-yard-line with the men of my family...

There's something awful and beautiful about the memory, as an 8-year-old child, seeing your "60-something" year-old grandfather rise out of his seat to yell "sit down" and give the one-fingered-salute to an L.A. Raiders fan. "That's right, Pop!", I think as I replay that memory in my head. "Not in our house!"

The '77-'87 era featured of a few of my dad's favorite Chargers, starting with Dan Fouts and followed immediately by his receiving corps of Wes Chandler and Kellen Winslow.

What follows are four of my favorite cards from this era that remind me of watching football with my dad. I know that these cards would bring a huge smile to his face, all these years later: 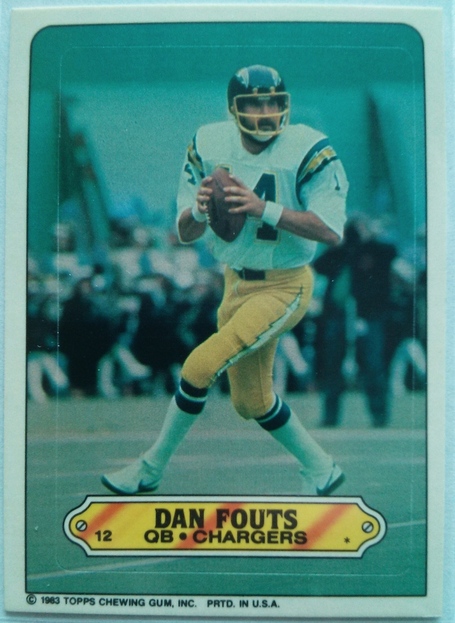 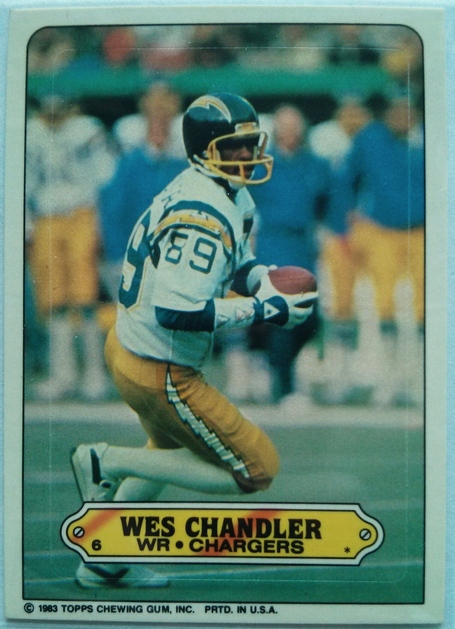 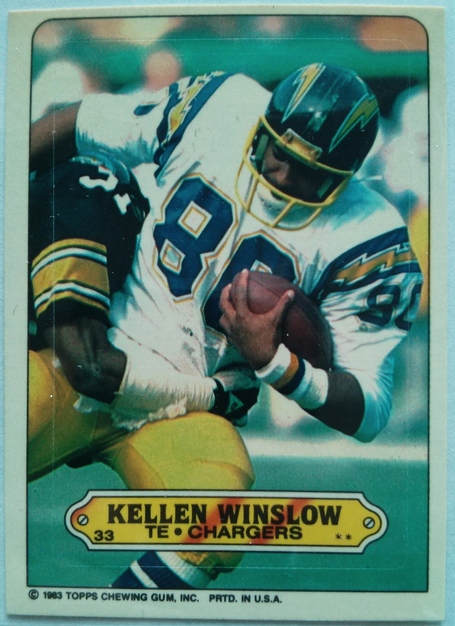 And another, from the Topps set the year before in 1982, Chandler going up and getting after it: 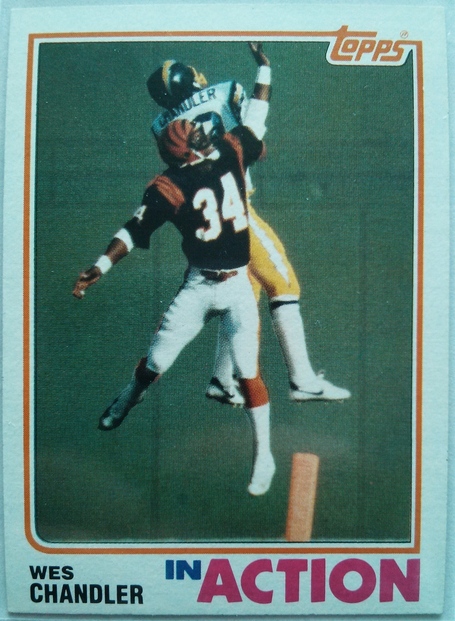 (The Chandler-as-a-Charger highlights start with Coryell introducing him at 3:00.)

I love hearing Fouts pleading his case at about 3:50 of that last video, "Give me Wes. Can I have Wes, please?!"

During the last couple years of my dad's life, we established a tradition: I would call him on Sunday's before the Chargers game. We'd catch up, but also talk about the game. Then, either at half-time or once the game was over, he'd give me a call and we'd recap the game. This became the one day of the week we knew we'd have a chance to check in on one another.

It's only been a couple of years since that last phone call with my father, but already that's already a couple too many.

Football is a great game, one that has always meant more to me than just watching, as I'm sure is the case with many of us. Football will forever remind me of my dad and his dad before that. Football reminds me of family and, should I get the chance, I'll do my best to instill a few lifetime memories for my future children and grandchildren, including teaching them how to give the one-fingered salute to Raiders fans. 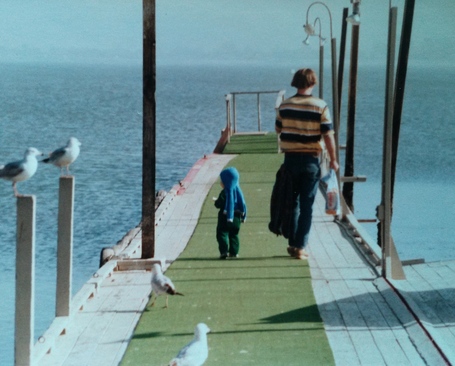 It's never quite enough time...

Thanks for reading, and...