Nicknames for the Chargers' 2013 Draft Class Should Not Be Rushed

We added some new Chargers to the roster last week and got our last little bit of official excitement until camp opens at the end of summer. While some of use are interested in testing out nicknames for our new additions, I'm suggesting we wait.

Share All sharing options for: Nicknames for the Chargers' 2013 Draft Class Should Not Be Rushed

Modern NFL Nicknames are overdone. A great player can quietly be great and earn a nickname like Greatest Of All Time (GOAT) and this strategy always works. Or they can give themselves a nickname, like CrimeTime, and hope it sticks. This strategy that can sometimes backfire, especially when you call yourself CrimeTime and have repeated run-ins with the law. New Chargers are coming into the fold and it seems quite natural to give them nicknames that endear them to the fan base. Let's marinate for a while before we go naming them. We wouldn't want it to backfire.


Nicknaming is an accidental art form, you can't force it

Like the slow clap in an '80s movie, a nickname cannot be forced. You can't just throw things against the wall and hope something sticks. If you go with alliteration and have nothing behind it, it will be awkward. Chris Berman calls himself "Boomer". It's awkward. Norman Julius Esiason? Definitely a "Boomer". Berman also doesn't seem to make enough correct picks to be calling himself "The Swami". I was once close enough to "The Salami" at the US Open in Oakmont, PA, to shake his hand, he reeked of cold-cuts.


Nicknames: the good, the bad, the ugly

The NFL has historically had some epic nicknames, maybe some of the best and most fitting in all of sports. The Fridge, Mean Joe Greene, Ed Too Tall Jones, The Nigerian Nightmare, Little Train James, The Bus, Crazy Legs Hirsch, Sweetness, Broadway Joe, Night Train Lane. These all had substance - they fit the player for one reason or another. There's no denying Sweetness, that name fit Walter Payton the way that Sugar fit Ray Leonard. Dick Lane was afraid to fly and traveled by train.

On the flip side are the bad ones that come from people trying too hard. The bad ones people always remember. Tony "The Punching Postman" Thornton never 'delivered' any titles in his professional boxing career. Darnell "The Ding-A-Ling Man" Wilson is a real boxer and that is his real nickname. I could never make that up.

It get's worse. For Mark Sanchez "The Sanchize" went from hopeful to ironic. By far, the most ironic NFL nickname I can think of goes to Freddie "FredEx" Mitchell, a receiver for the Philadelphia Eagles from 2001-2004 who "Always Delivered". FredEx was detained but never arrested for allegedly shipping a package containing 7 lbs of marijuana to his restaurant in Lakeland, FL, and thus goes down in the pantheon of memorable nicknames for purely ironical reasons. Also, I'm pretty sure he used UPS.

Beast Mode, Megatron, and the Law Firm are 3 that are clever and will probably not become ironic. Hopefully. People started calling Andre Johnson "Optimus Prime". Sorry Houston fans, that's not original at all. You may not remember that BJ Raji called himself "The Freezer", you shouldn't.

Rich Eisen tried to call Frank Gore the "Inconvenient Truth". Yes, his name is Gore, and yes, he should've been drafted sooner than the 3rd round. But, no, that's not a good nickname. It has something behind it but it's a real stretch to make the Al Gore analogy. Every time Al Gore fondles a masseuse he becomes less well-known for that film. 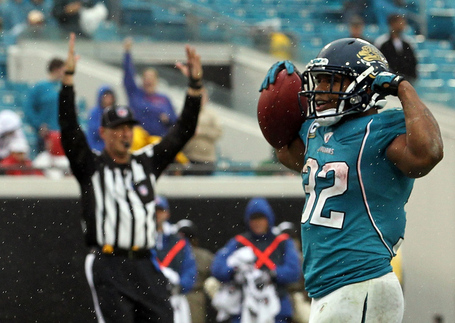 Pocket Hercules is a great description of Maurice Jones-Drew, that is another one will probably last. RG3 is RG3, that's his name and sounds cool. "Robert Griffin the Third" can be pronounced in a way that sounds like Mrs. Howell from Gilligan's Island. That is not so cool.

Did you know that Broncos fans call Peyton Manning "The Sheriff"? Except for his size, Manning looks more like an IT Guy, to me, maybe Computer Crimes. Remember Stanley Richard? He was "The Sheriff" of Thatdudejustranrightbyme County. Nobody even get's pulled over there.

Devin Hester may be the Windy City Flyer, but there are two problems with that. First of all, it's just too "on the nose". Yes, he's very fast Chicago, good job noticing that. Second, it violates the rule of syllables - if your nickname has more syllables than your given name, it's not going to be used (see also, Inconvenient Truth).

It's hard to nickname return specialists. Dante Hall called himself "The Human Joystick" - Travis Henry and Antonio Cromartie have a better claim to that moniker. Speaking of my namesake - try not to give yourself a nickname that will bring to mind your prior embarrassments. Plaxico Burress will never call himself GlockStrap or SweatPants.


For the New Chargers...let's wait

Do we know enough yet to nickname our new Chargers? Should they nickname themselves yet? I'd hate to have anything like "Lights Out" come back to bite us. We know the most about Te'o and I think we should avoid using that information to give him a nickname. "eHarmony" is not very fair and probably not very original.

I've seen terminator and hawaii 5-0 in thrown around in threads. I hope Manti merits an intimidating nickname, but I am in wait and see mode. If we call him terminator and he, god forbid, does not work out, the irony may apply to our front office (is Josh McDaniels in Tebow Time?). Similar irony could be used for 5-0, arresting the new staff before they even pull out of the parking lot. We want to be extra careful with this one.

You may not know that the "DJ" in DJ Fluker stands for Daniel Lee Jesus (according to Wikipedia). I think it might be too early to anoint him "Messiah", but I hope we do one day cheer "Jesus Fluker Saves" and not "Jesus, Fluker" /facepalm.

My point, let's get to know them. Until then, we can just use their given names. Welcome aboard Manti and DJ and Keenan and the rest. I hope you do some things on the field that quietly earn you awesome nicknames.