A Sneak Peek at the New Chargers Offense

For the better part of the last 30 years, not counting the years between when Ralph Friedgen and Norv Turner called the plays (1997-2000), the Chargers have been running the Coryell Offense. With the hiring of Mike McCoy as Head Coach and Ken Whisenhunt as Offensive Coordinator, this is poised to change.

Share All sharing options for: A Sneak Peek at the New Chargers Offense

Indeed, one of my primary reasons for suggesting the hiring of McCoy (#2 on my list of coaching candidates back in November) was his offensive flexibility, as shown in Denver the last 2 years during the Orton-Tebow-Peyton Manning transition.

So, the question really is… what will the Chargers’ offense look like next year? To answer that question, we first have to look at McCoy and Whisenhunt’s past coaching careers - which for coaches is very much like the lineage stories in the Bible, where you spend passages learning who begat who.

Where you start in the NFL very much shows were you can be expected to go.

The Lineage of Mike McCoy

Mike McCoy was a starting QB from the University of Utah. He bounced around the NFL and NFL Europe for several years, after going undrafted in 1995. His coaching career began in earnest with the Carolina Panthers in 2000.

During his time in Carolina, McCoy was exposed to the three different main offensive systems in the NFL, by the following coaches:

Bill Musgrave – Walsh Offense. Musgrave came to Carolina with George Seifert , after having played and coached under Seifert and Mike Shanahan.

Dan Henning – Coryell Offense. Henning was the offensive coordinator for Joe Gibbs in Washington, followed by failed stints as Head Coach in Atlanta and San Diego. He later hooked up with Bill Parcells in Miami, where he may have picked up some of the next system.

Jeff Davidson – Erhardt/Perkins Offense. Davisdon had been the TEs coach for the New England Patriots under Charlie Weis and Josh McDaniels.

McDaniels hires McCoy to be the Offensive Coordinator in Denver in 2009… and he’s retained by his new (former) Head Coach in Carolina – John Fox.

Note: If you’re not sure who Ron Erhardt and Ray Perkins are, that’s OK. We’ll get back to this system shortly. For now, just remember the name.

The Lineage of Ken Whisenhunt

Ken Whisenhunt was a 2-time all ACC TE at Georgia Tech, who was drafted in the 12th Round of the 1985 draft. His playing career included 4 years with the Falcons (under Dan Henning), followed by short playing stints with the Washington Redskins and New York Jets.

Whisenhunt entered the college coaching ranks at Vanderbilt in 1995, joining the NFL later with the Baltimore Ravens and Cleveland Browns as a TE coach. In Cleveland, he worked under Head Coach Chris Palmer. Palmer’s offense was a hybrid of the Run ‘n’ Shoot and the Erhardt/Perkins offense, learned from Kevin Gilbride, Ray Perkins, and Tom Coughlin.

After a year on Al Groh’s staff for the New York Jets, Whisenhunt was hired by the Pittsburgh Steelers as the TE coach. He worked under Mike Mularkey, who was running the Erhardt/Perkins offense in Pittsburgh. Mularkey had replaced Kevin Gilbride, who had replaced Chan Gailey, who had worked under Ron Erhardt.

Erhardt was best known for being the offensive coordinator of the New York Giants during Bill Parcells’ tenure, and then running the Pittsburgh Steelers’ offense under the first few years of Bill Cowher’s time in Pittsburgh.

Perkins was the former head coach of the Giants and Tampa Bay Buccaneers, who also ran the offense for Parcells in New England.

In brief, this offense is what’s referred to as a "concept-based offense" which means that players are taught to run a concept working with other players. It incorporates elements of both the Walsh and Coryell offenses, and is built with versatility in mind.

For example, a concept might be two receivers on the left running double slants (code named Bill) – whether the receivers are two WRs, 1 WR and 1 TE, or 2 TEs is unimportant - while receivers on the other side run a streak and post (code named Ted). The play would then be called Bill / Ted, with other codes used to denote formation (see Figure 1 below). 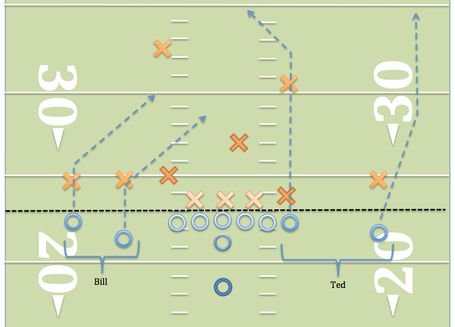 In terms of versatility, the Patriots in 2007 might have run such a play with Donte Stallworth and Wes Welker on one side, Ben Watson and Randy Moss on the other side. Everyone thinks the Patriots have abandoned the dink and dunk / power run combination (which the Steelers used a lot with Neil O’Donnell in the mid 1990s), and gone exclusively to the shotgun spread.

They could run the exact same play in 2012, except they’re using Rob Gronkowski, Aaron Hernandez, and Brandon Lloyd instead of Watson, Stallworth, and Moss. The end result is what appears to be a completely different offense –a controlled passing game out of run looks.

Fundamentally, it’s a scheme that changes based on the players it uses to run the concepts. The great problem for the Coryell and Walsh systems is once you understand the following ideas:

You have an idea for stopping the offense. In the case of the Erhardt/Perkins offense, there’s no overriding design or goal, except to feature what your players do best, or take advantage of that particular opponent's weakness.

What Does This Mean for the Chargers Offense?

At least initially, I’d think the Chargers will be using the following elements:

A quick spread passing game (lots of shorter routes), to take the pass rush off Philip Rivers and feature the quickness of players like Eddie Royal, Vincent Brown, Robert Meachem, and the newly acquired (from New England) Danny Woodhead.

A zone running game to feature what Ryan Mathews did well in college, and figure out finally whether or not he can be a featured runner. The Chargers’ offensive line was actually pretty decent in limited use of zone runs last season. The acquisition of G Chad Rinehart and OL Coach Joe D’Alessandris (both from Buffalo) were both strong indicators the Chargers are moving in this direction.

Because the tendency for this offense is to exploit mismatches on an opponent-by-opponent basis, rather than relying on out-executing the opponent week-by-week, I’m also guessing we’ll see a "phasing out" of Antonio Gates as the featured receiver.