We are 3 rounds in and some of you are happy, some of you are sad. I say, let's look at a scantily clad lady rockin' the blue and gold and think about beer, bros, and waves for a while.

Share All sharing options for: Digital Dolt, Issue #3 - The Draft Giveth, and, let's look at a Cheerleader....

Disclaimer: The Dolt is a shameless impersonation of Spencer Hall's Guide to Spicy Living, the Digital Viking. To honor that memory and put our own twist on things, we will review 5 essentials of the southern California sports fan's lifestyle:

Whether you like the DJ Fluker pick or not, Lauren is still hot, so look at this and feel better. Here she is at the Pro Bowl in 2012. 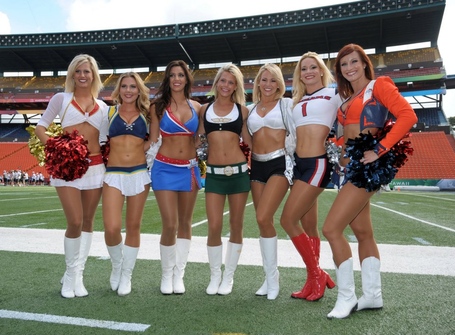 My favorite part about this picture is that our girl Lauren is putting the other teams' representatives to shame. Hey there Denver Broncos girl, would you mind turning around? I just want to check for something. And the Jets' representative is obviously...well, I am not sure what happened to her but it's either surgical or drug-induced. Feel free to debate in the comments.

You can find more Lauren here, here, and here - holding it down on the cover of the swimsuit calendar.

We drafted DJ Fluker when Sharrif Floyd was still on the board. I don't know what could be worse, except maybe being a Jets or Bills fan. What happened to Floyd? Did he catch some kind of draft-day herpes from Aaron Rodgers? Was it an outbreak of Gator AIDS contracted from Ryan Lochte's new show? What happened to all the GMs? Cowboys fans don't feel good about this either. 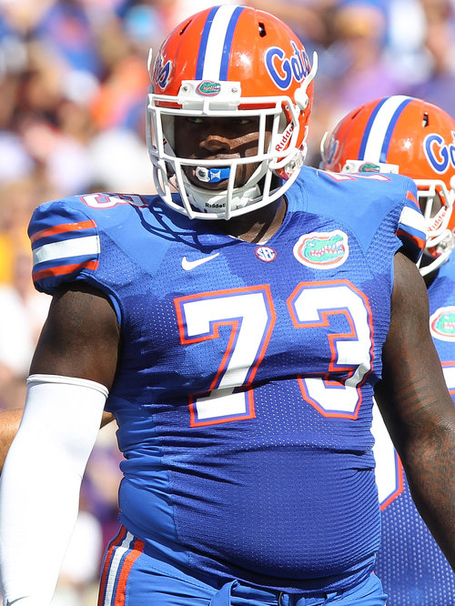 Jacksonville, FL is America's Best Sports town and according to this guy, it's "the San Diego of FL"? Maybe, but only because the word "Jacksonville" is Dutch for "the manatee's vagina".

Representing the ascent of teams to the playoffs, two gold brackets surround a "virtual" football, and allude to the championship trophy.

That's not all they allude to.

Lot's of vagina references today, so in case you forgot: "RAWR", this bear eats hot dogs for lunch.

It's not sports, but it's worth a read. One night stands are fun. They get more awkward when your entire city is on lock-down the next day bro. A coyote morning, afternoon, and evening...I've only got so many arms I can chew off!

What Would Ryan Lochte Douche? Hard to say. They are all really hard to say.

We covered the good — La Puerta and Salazar's — it's time to turn our attention to the other end of the spectrum: Fred's Mexican Cafe. My momma was a firm believer in the "don't say nothin' if you don't have nothin' nice to say" credo. Luckily, I was not a very obedient child.

Let's start with some mistakes: Is putting tomato paste in your salsa okay? No, Fred's … just … NO. Also, put some jalapeños in there, I can't taste this stuff.

My two experiences at Fred's have been largely not by choice. Most of my visits to the Gaslamp are with tourists from places like Minnesota, Nebraska, and Michigan. These are places where they have a place called Taco John's that serves "Mexican Fries" which are tater-tots sprinkled with taco seasoning. They actually aren't bad, but seriously, I think calling them Mexican fries might be racist or something. 24 years in S. California and I never heard of a Mexican Fry.

What was I talking about again? Oh yeah, Fred's. Take your relatives from Minnesota, they'll think it's authentic and they'll tell all their friends. Don't expect to be wowed by the Chips and Salsa, or the service. You can get a decent meal at Fred's, but you can get just about the same from Carlos Murphy's, El Torito, or (insert non-impressive chain mexican fusion place here).

It's the Draft and beer just won't cut it. So, we'll be drinking these and watching the tilt Friday for rounds 2-3.

Yes, it's a bloody mary made with bourbon instead of vodka. But, it's better. Trust me, it is. Plus celery gets stuck in my teeth and the carrot stick is preferred. The sweetness of the bourbon does a better job off-setting the acids from the tomato juice and the heat from the other ingredients. YUM.

Plus the Derby is coming up, right? Impress your friends bro. If you drink this drink and also come up with some BS horse that you like to win the Derby because of the heavy track and a tendency for the favorite to ease they'll think you are some kind of savant. What kind of savant depends on how many of these things you drink.

The Brah Reccomends: Your favorite spot Broseph, nothing happening again this weekend...

The ground swell is out of the SW, the wind is out of the NW, which means nada surf brah. No weather to change the outlook this weekend, but looks like all around the county we get better by Wed-Thurs. Doesn't matter where you ride, you are going to get, at best, a mediocre 1-2 ft break this weekend. I've been doing this for 3 weeks and I've been telling you to sand surf for 3 weeks...it's like there's no good swells in our county during beach season or something. Let's hope we get some better breaks soon. Jeah.