The "Natrone Bomb" would help lead the Chargers to the Super Bowl in 1994. The following year Fleer would pay tribute to Means by way of a painted football card.

Though no longer a Navy facility, many Chargers fans grew up and/or lived in close proximity to NAS Miramar, at least within the range of it's flight path.

As an aside, though the tactical school was officially named the United States Navy Strike Fighter Tactics Instructor program, or "SFTI," it was commonly referred to by its Tom Cruise-loving, "Goose"-calling name, TOPGUN. While principally training elite pilots for modern air-combat with A-4 Skyhawk's, they also made use of T-38's, the F-106, as well as the F-5. It is of interest to note --- and you'll see why momentarily, trust me --- the program also trained with the A-6 Intruder.

Perhaps at this point you're thinking, "y'know, I could really use a tune-up with my familiarity with the A-6 Intruder before reading the rest of this post on Chargers football cards..."

I thought you might be having such a thought:

Where I lived, we were right in the flight path of the jets training for aircraft carrier landings. Some of us neighborhood kids got so good at identifying the jets going over head, we'd guess what it was before looking...though I don't really remember spotting too many A-6's, mostly F-14's and F-18's.

Proudly, San Diego is a military town and our Chargers pay tribute to those that serve. Yet, it's rare to see such tributes show up in sports memorabilia, let alone football cards. But when it does, man, oh man, does something…unique happen. 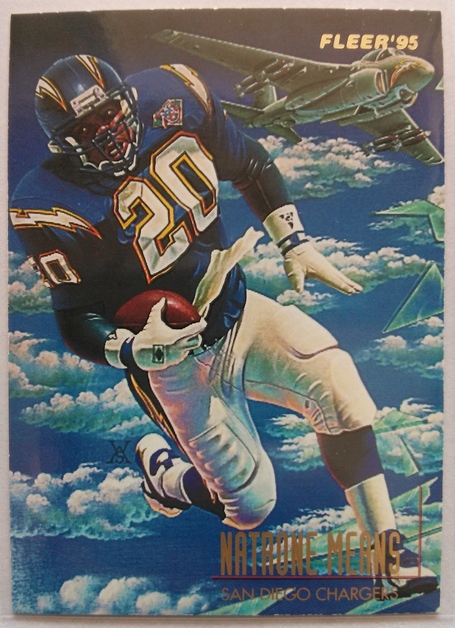 Perhaps you noticed, this card was hand-painted?!

Not only is this card hand-painted, and quite impressively by illustrator Wayne Anthony Still, unmistakably in the upper-right corner is none other than one of the all-time coolest Navy bombers, the A-6 Intruder! But, what is it doing on this card?

Consider that for a moment.

Did you also think of Iron Maiden's "Aces High" immediately upon catching a glimpse of this stunner-of-a-card?

So, yeah, this is truly a surreal card: Means "running" the ball, walking on clouds. The way the card is framed, I'm of the opinion the "Natrone Bomb" (I didn't make this up, as you'll read below) is to be viewed as being dropped from the jet, set fly to do his damage.

I suppose that's one way we can interpret the image used on this card. But, that says nothing of the apparently breaking up of time and space with the shards of sky/glass on the right-hand side. Is it the to-be-expected shrapnel from hte exploding awesomeness that is this card? Yeah, maybe, but actually...

This card is part of a sub-set of 6 cards, all worth acquiring in and of themselves, but mostly as they fit together to create a larger image.

To the immediate right of Means, when the cards are placed in their puzzle-fitting order, fits the image of Sterling Sharpe. His card clearly implies that he is the cause of the splintering apart of space and time.

Looking further at the set, however, it seems as though, for these cards commemorating the '94 season, Ken Norton of the 49'ers would've been the most obvious cause for the disruption of reality --- who just happens to be juggling three rings on his card-image, contentedly --- his back to the splintering apart of our Super Bowl dream, at the time.

Back to Natrone: he was most definitely a beast. Fleer really took the "bomber" moniker and ran with it. Unfortunately, while flying high in '94, it would only lead to heartbreak and defeat at the hands of the 49'ers, as you're no doubt well aware.

Natrone started his professional NFL career with our Chargers. He would be drafted with the 41st pick in the second round and would play in San Diego from 1993 until 1995. Though he spent 1996-1997 with the Jaguars, he'd then flip-flop back to San Diego from 1998-1999 before signing with the Panthers for his final year in the pros in 2000. 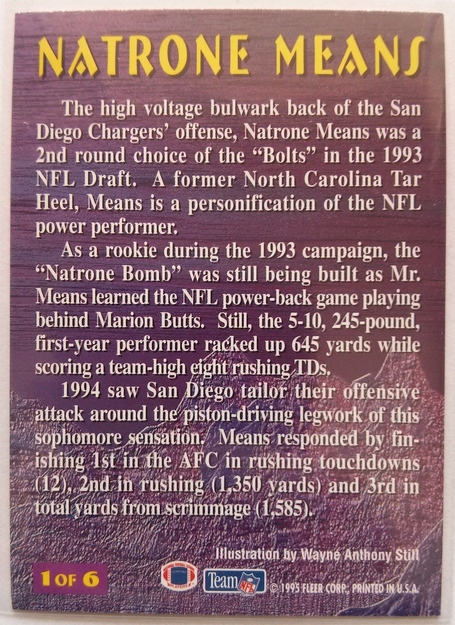 The high voltage bulwark back of the San Diego Chargers' offense, Natrone Means was a 2nd round choice of the "Bolts" in the 1993 NFL Draft. A former North Carolina Tar Heel, Means is a personification of the NFL power performer.

As a rookie during the 1993 campaign, the 'Natrone Bomb' was still being built as Mr. Means learned the NFL power-back game playing Marion Butts. Still, the 5-10, 245-pound, first-year performer racked up 645 yards while scoring a team-high eight rushing TDs.

1994 saw San Diego tailor their offensive attack around the piston-driving legwork of this sophomore sensation. Means responded by finishing 1st in the AFC in rushing touchdowns (12), 2nd in rushing (1,350 yards) and 3rd in total yards from scrimmage (1,585).

We got the best of Natrone as he was selected for the Pro Bowl in 1994 as part of the Super Bowl team. No reason to go further into that BFTB Tournament of Terrible storyline candidate here...