Are prospects in the draft being Undervalued or Overvalued?

Share All sharing options for: Are prospects in the draft being Undervalued or Overvalued?

After breaking down the film, I'm going to touch on two prospects from each "need" position that the Chargers have a chance to target with their respective draft choices and justify if that prospect is underrated or overrated. This is a two part series, and today I'll address Nose Tackle, Safety and Inside Linebacker. Let's start with the popular Star Lotulelei.

Star is a talent. He's shown that he can be dominate. He abused one of the top centers in the draft Khaled Holmes and the interior offensive line of USC singlehandedly. When Star wins his battles, he usually wins them on his raw strength and power that can overmatch the majority of interior lineman on the Collegiate level. As you can see here:

Here's the problem, Star isn't always engaged and focused for his other games that I watched like he was for the nationally televised game against USC. Judging by seven game tapes I watched of him, he kind of cruised through those games, he would flash here and there, but it's not the kind of tape you would expect from the 11th overall pick. In Pagano's defense he would play primarily nose tackle, and based on his film he does not do a good job of handling double teams; more often than not he would get washed out of the play creating huge running lanes. As you can see here:

You don't risk taking a player that high who turns the switch on and off, and plays when he wants to. Star could also develop better usage of his hands, and pass rushing moves, as this video shows, you can't always win with just a bull rush.

Many are concerned with his heart condition. Me? Not so much. He’s since been cleared of that. What worries me is his dedication; in 2009 he walked away from his JUCO team because he reportedly lost his desire to play the game. That's concerning for a guy who warrants such a high pick. Verdict? Overvalued.

Hankins is a big man that hustles. The 320 pound nose tackle flashes a great motor when you roll the tape. He has surprising agility for a man his size, and he does a very good job of commanding double teams or beating his man one-on-one. Watch this video where he gives Nebraska all kinds of fits; very good quickness off the ball is displayed.

If we do take a nose tackle high, this is the guy that I would want. Concerns about his stamina don't worry me because of Cam Thomas's presence. Hankins does good job of controlling his gaps and using his hands, and playing all the way through the snap, which for a NT, you can't ask for much more. He also brings versatility, which seems to be the common theme for recent additions to the Chargers. He played several snaps in all different gaps. He played as the 1 technique, 3 technique as well as the 7 technique. He would add depth along the line. Here, he is showing awesome effort chasing Denard Robinson.

Let's take a look at some safeties. I won't use the term strong or free because I feel like it's a dying distinction. In the past, free and strong safetys were determined by which side of the formation they aligned to. The strong safety aligns to the strong side(the side with the Tight End, generally) of the formation. The free safety is aligned to the weak side. The strong safety would be part of the run front and would be down in the box. The free safety was called that because he wasn't part of the run front and was "free" to only worry about his coverage responsibilities. Nowadays, with the popularity of under front defenses where the linebackers are shifted over towards the strong side, it is more common for the free safety to drop in the box and the strong safety is not tied to the run front. That is why we see Eric Weddle constantly lurking around the line of scrimmage. 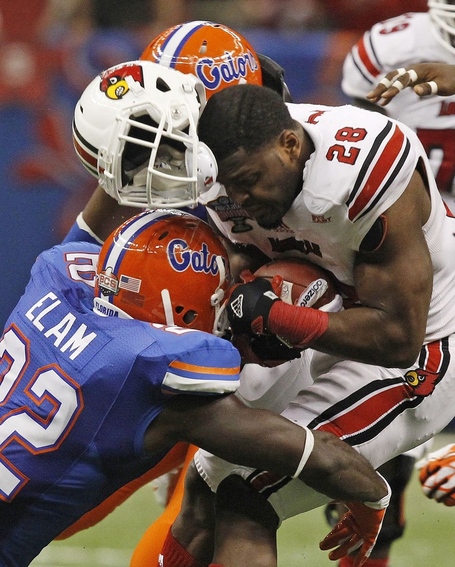 There’s so much to love about Elam’s game. The more I watched him, the more I liked him. Elam stands 5’10 and 208 pounds and will make you feel it every time he hits you. Elam LOVES contact. Don't believe me, just watch. Elam has hits like this every game.

He’s physical and does a great job of blitzing off the edge or filling the lanes in run plays. Each game I watched he jumped off the screen with his helmet jarring hits. What surprised me most about Elam, was his coverage. He was often matched up against the slot WR whether it was a quicker guy or a TE, and more than held his own. He has surprisingly good makeup speed, as you can see on this punt return, great hustle and effort.

He was asked to play centerfield several times and showed good range. I think he’d be a great addition as he brings energy and a certain personality that rubs off on his teammates. The only thing I didn’t like was when he was in coverage, he would get caught flat footed at times waiting on the WR to break, and get caught chasing. This can be coached and isn’t much of a worry. Elam is an instant upgrade, and if you couldn’t tell, verdict? UNDERVALUED

Thomas is one of those prospects that shot up the draft boards due to his postseason performance. After running in the low 4.4s the safety out of Syracuse is known for his physicality and recklessness. He launches his body at opposing receivers and can play the intimidator role. Thomas was actually surprisingly good in coverage. In this USC tape here he’s matched up with potential 1st rounder Robert Woods several times and does a solid job against him. He’s matched up inside and outside and has the versatility to play the centerfield roll as well as playing in the box. The thing you’ll also notice in that video, and any other tape you pop in of Shamarko, is he misses a lot of tackles. I mean, a lot. Several times he takes a bad angle and takes himself out of the play, or he’ll throw his body at the runner and miss. The missed tackles became too much of a theme, and if he’s having trouble with running backs in the Big East, the runners on the next level are sure to give him issues. Not to mention, he’s easily sucked in on play action, he’s too worried about the big hit instead of playing his zone and reading his keys. 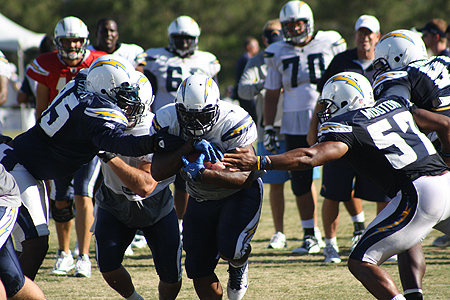 Inside linebacker is a position of need. As you can see here you'll see that other than Donald Butler who is coming into his own, the Chargers have Bront Bird, Philip Dillard, Jonas Mouton, and Andrew Gachkar. Wouldn't exactly call that a fearsome bunch. Yes, Mouton is to said to be in the in the Chargers plans for '13 and yes, we don't know what he can do. He was described as coming into camp out of shape and needing to improve his communication skills, which is essential for the "Mike" position. This draft is full of linebackers that could come in an instant upgrade at the position. No, sorry guys, no Te'o here. There are two guys however who I think fit perfectly in the Chargers scheme. 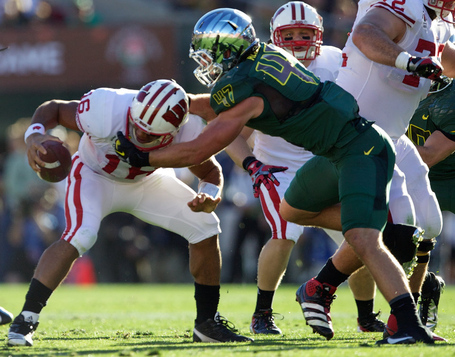 The first time I watched Alonso I knew he was special. The 2012 Rose Bowl where he makes an outstanding diving interception as well as chases down soon to be all everything QB Russell Wilson for a sack. He was all over the field that game. He finished the game with 5 tackles, 2.5 for loss, as well as 1 1/2 sacks and an interception. His presence was much larger than that, as it was for every other game I watched. You can’t measure his energy and instincts in the box score, his awareness and quickness in coverage help him blanket TE’s in coverage; he’s also quick enough to guard Running Backs out of the flats. I think his intensity and explosiveness would give the Chargers one of the best young duos of inside linebackers in the league. Kiko plays sideline to sideline, full speed, all game.

He does the little things right, like attacking with the proper shoulder, using his hands to disengage, and always playing with a high motor. This video is a good example of what you want in your "Mike" linebacker, you want a guy that blows plays up, as well as finishes them. Here is a good example of that.

Versatility as well to play multiple positions for Pagano, this sideline-to-sideline linebacker has the athleticism that you can’t teach and should be playing in Hawaii in no time. He does have red flags (DUI, Burglary Charge, Injury issues) that will push him down the board, but you can’t teach his football IQ, and the good news is, he’s only begun to reach his potential. Verdict? UNDERVALUED 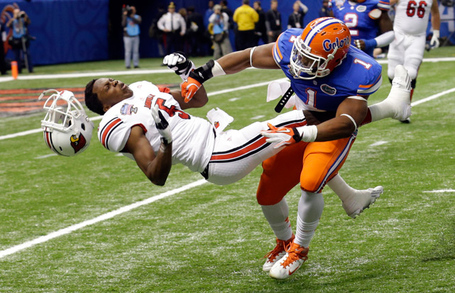 Bostic is an intriguing player. When you watch him he’s your prototypical "Mike" backer that does a very good job of taking on blocks and disengaging with his hands. He’s not necessarily quick or fast but he takes the right reads to eliminate those worries. Another really good football player who has good instincts and shows off his physicality when attacking blockers. He’s better than I expected in coverage, he’s pretty stiff, you realize that after a few snaps, but he recognizes routes well and has a very good motor. In this video, it's exactly what you want you "Mike" linebacker to do. You want him attacking downhill, keeping his outside shoulder free, and turning the play back inside. There's nothing flashy here, just sound football.

Why is he interesting you ask? If you watch Bostic play he looks like a 4.8 guy. At the combine, he ran a 4.59. I have no idea how; he certainly doesn’t play that fast. He does show good closing speed here on this big hit.

I believe he doesn’t realize how good of an athlete he is, and with proper coaching he’ll be able to come full circle and be able to play in the league for along time. Verdict? Undervalued

The Chargers need help, we get that, but the draft is full of players that can come in right away and not only contribute, but start. We’ll go over Cornerback, Outside Linebacker, and offensive line in the next series. Who are some overrated/underrated prospects that you would like to see the Chargers draft or avoid this upcoming draft? Keep it to the positions mentioned in the article. Let us know in the comments.