Aggregating and examining historical mock draft data to determine how accurate Mel Kiper, Mike Mayock, Todd McShay and many others have been with their mock drafts in the past.

Share All sharing options for: Mock Drafts: A Thorough Evaluation

This is the introduction to the NFL Draft model I've built using publicly-available mock drafts. The model has significantly out-performed typical mock drafts, and has the capability to do a bunch of cool functions: mapping the probability distribution for when a specific player is drafted, uncovering the players who may be reaches/drops, mapping the odds a particular player lasts until a particular pick, etc. All those cool functions will be shown in part two, later this week, once the mocks become more robust and the top few draft selection are (more or less) set in stone.

First, however, we must evaluate the data that is going to be used; knowing your input data is an extremely important part of building any model. For those of you unaware, I was that douche guy who made the Padres: The Sad Truth documentary that has spawned the Change the Padres movement. In addition to tabulating what the Padres' ownerships/executives have done/said, I have also kept diligent track of many mock drafts over the years. In the sections to follow, I'll break down the various mock drafters I've kept tabs on, and present some key trends seen in mock draft data. (Note: when the model was built, I did not examine 100% of the data...this is standard practice. Below, however, are some various metrics applied to 100% of the data).

How to evaluate a mock draft

Let's start with how NOT to evaluate a draft. Most places that grade drafts, like http://www.thehuddlereport.com/, use the following system, or one similar to it:

This system is flawed for several reasons:

So, how have I graded the drafts? In the most shortened way I can describe it: the p between where a player is projected to go and where he ends up going is normalized against the (smoothed) typical error seen in that draft slot. In other words: if you miss by 5 selections at a slot where there is generally less error, you'll be more penalized than missing at a slot where there is generally more error. Projecting someone to go later than he does is less rare than projecting someone to go sooner than he does, so this is also accounted for in a subtle way (which would bore everyone if I went into further detail).

Just know this for when I discuss the best mockers below: the more negative the score, the better the draft; a value of 0 is average; a positive value is poor.

In what I'm sure will be very disappointing to everyone, the best mock drafters of the 30+ that have been graded since 2007 are Mike Mayock, Mel Kiper Jr., John Clifford, and Todd McShay. And it isn't really close. Since 2007, Mike Mayock's typical score is -8.5, Kiper's is -6, McShay -5.5, and Clifford -5. Robby Esch is the top of the next tier (-2.5). The most run-of-the-mill drafter -- ie. the one closest to 0 -- is Peter Schrager from MSN/Fox Sports. I would tell you the worst mock drafter, but I feel bad publicly goading people for doing a poor job. Just kidding. The worst mock drafter examined is Jeff Mullen, who was just as bad (+8) as the best in the business was good. (Some of his picks last year -- Jonathan Martin 13th, Courtney Upshaw 16th, Mike Adams 23rd, and his 29th/30th combo of Konz/Zach Brown -- were particularly poor.)

All these negative and positive scores are tough to visualize, so here's some visualizations for everyone. The x-axis is the player's actual draft position, while the y-axis is the player's mocked draft position: the tighter the distribution, the better the mock drafter. (Note: The different marks represent different years, but that's not entirely important. Some notable misses are labeled. A default value of 40 is applied when a mock drafter did not rank a particular player.)

Let's start with the best of the best: Mike Mayock, whom you'll notice has no real horrible misses. 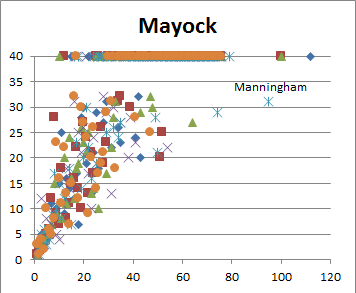 Mel Kiper Jr., who has more reaches than Mayock, but less players that he failed to project highly: 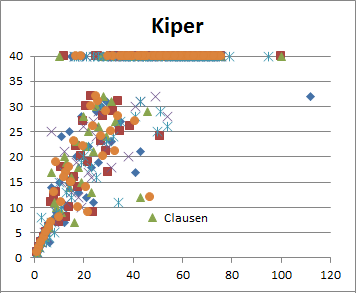 Todd McShay, who has just a few more misses than Kiper: 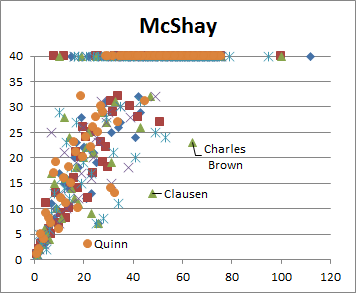 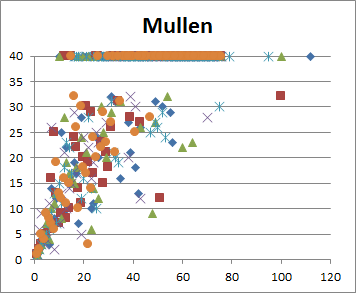 And players projected to go between 10 and 20:

The remainder of the first round: