The Digital Dolt is a weekly feature on Bolts from the Blue that provides humor, surf reports, beer reviews, and general derpy news while highlighting a new Chargers Girl in each issue.

Disclaimer. The Dolt is a shameless impersonation of Spencer Hall's Guide to Spicy Living, the Digital Viking. To honor that memory and put our own twist on things, we will review 5 essentials of the southern California sports fan's lifestyle*:

1- Charger Girl of the Week, because in SoCal our inspiration is rarely more than skin deep.
2- The Derp. Whatever Deion Sanders said on the NFL Network this week and why it bothered us.
3- Chips and Salsa. Best bars and restaurants by the ubiquitous appetizer of our region*.
4- Beverage. No shirley temples or umbrella drinks.
5- Surf Report. Everyone knows why we can't stay on local TV, the gnarly swells at black's brah.

Chargers Girl of the Week (CGOTW): Welcome Back Kara. 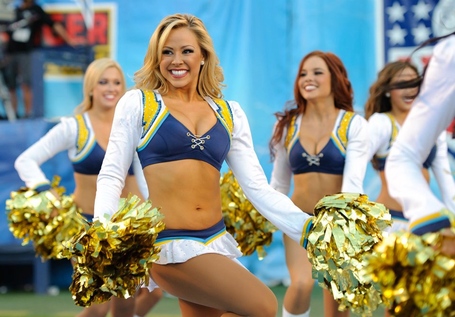 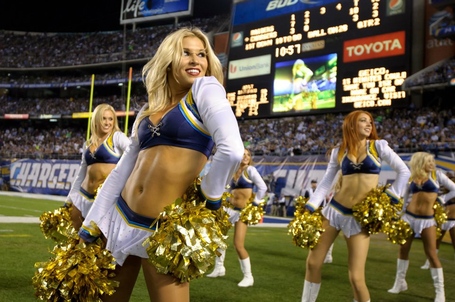 Yes, she is back for the 2013-2014 season and smokin' hot. Kara is heading into her 4th year on the squad, is a co-captain, and has brains - she's a Carlsbad native who studied Politics at Oxford in 2008. She currently works with VIP clientele in the San Diego nightlife industry. I don't know what that means, but I think she might be available for parties and lectures on the geopolitical impact of climate change.

Really, the NFL network is making it too easy on me this week:

Last week we profiled Salazar's, which has pretty amazing chips. This week we'll discuss La Puerta, which has pretty amazing salsa. If only we could put these two restaurants together, and beef up their beer menus, CrimeTime31 would never leave. La Puerta has the best green tomatillo salsa I have ever had. It's tangy, savory and has just the right amount of heat to keep you coming back for more. Bottomless mimosas and chorizo burritos make it a good brunch stop too. I have never had a bad meal there.

I tasted this stout for the first time this past weekend. It was recommended to me by the local bottle shop proprietor who conveyed that the stout is fermented on a bed of oyster shells. That's right, Marooned is a collaboration between 21st and the Hog Island Oyster Company, so I had to try it. It's a quality stout, appears dark and fluffy and holds a solid head, which is what any of us would expect from this style. The nose is chocolatey and I was pleasantly surprised that it was not fishy. I thought the taste was smooth, although some on beer advocate say it has a salty taste, but I think they are using their brains too much and their mouths not enough. I get a smooth, chocolatey taste up front with some hints of willamette acids - no real strong salty taste. Finish is light, which I enjoy in a stout.

Oyster shells are rich in calcium carbonate (main ingredient in lime) and is often used as a pH corrector because of its alkalinity (pH around 9). So if I had to guess, I'd say the oyster shells probably correct some water issues at 21A more than they contribute salt or fishy tastes. The salty flavors other complained about were not apparent to this consumer, who happily finished the 6 pack that evening.

The Brah Recommends: Getting out your skim board or chillin' on the beach.

Looks pretty bogus this weekend, bros. 1-2 foot swells all over the county and no help from the wind anywhere. So, put up your board, throw on your shades and head out to Del Mar tomorrow. It should be 74 degrees, which means sunbathers and righteous talent-spotting.

*CrimeTime31 is a resident of East Tennessee and has never surfed a day in his life.