Ryan Mathews: The Tale of the Tape

Nick Shepherd has a great hatred for the decisions Ryan Mathews' makes on the football field. Here's him explaining why the San Diego Chargers Running Back struggles to be productive or stay healthy.

Share All sharing options for: Ryan Mathews: The Tale of the Tape

Something about Ryan rubs me the wrong way. It's not his injuries - those happen. It's not his physicality - he's naturally as talented as anyone I've watched play the game. So what it is?

It's Ryan's head. As a recovering World of Warcraft player (I know, I know...but I played college ball, too,) I truly find it hard to believe that Ryan could ostensibly be so good at a game that involves so much thinking, planning and strategy. Because he displays NONE of this on the football field.

[NERD JERK ALERT: Hope you've all seen the infamous "LEEEERROOOOYYYY JEEENKINS" video. It's hilarious for many reasons. The pre-game planning is absurd in it's sheer nerddom. The monotone tone of voice is amazing. And the cherry on top is the idiot who discards the carefully laid plans of these "heroic warriors," and charges headlong into battle with zero regard for where he's going, what he's doing, or his own safety.

Maybe THAT's why Ryan loves WoW. At one point, he was a level 80 character (the highest possible at the time, and his account has since been deleted) and with some of the harder to obtain gear in the game (meaning he spent a lot of time raiding, which requires study and planning...)]

We don't know a damn thing about Ryan's proclivity for the film room. But it's pretty easy to see how many yards Ryan is leaving on the field by charging headlong into battle with zero regard for where he's going, what he's doing, or his own safety.

Don't believe me? Let's check out the film.

We'll start with week 4 against Kansas City. Ryan's first game back from injury. I watched every single one of Ryan's, and a few stuck out to me. Observe as we jump-cut to the 2nd quarter, as Ryan takes a pitch and heads right.

Ryan's in perfect position for a cut back, with his right foot just about to plant. For some reason, he doesn't. He should gain at least 10 yards, likely more. Instead, he bounces outside right into the arms of Eric Barry. No gain.

So for our running tally, that'll go in the books as -12 yards off his "expected total."

On his very next run, we see why Ryan is so "injury prone." Take a look?

Hopefully, this is what Ryan means when he says he took too much contact last year. Sure this is an impressive display of power, but it's really a pretty meaningless hit that doesn't have to happen.

Next play. Ryan makes a decent run here, going hard off tackle for four yards. Upon closer examination, we can see Ryan left another 6 or so on the field. Rather than absorbing the whole play, here's a quick snapshot of what went wrong. 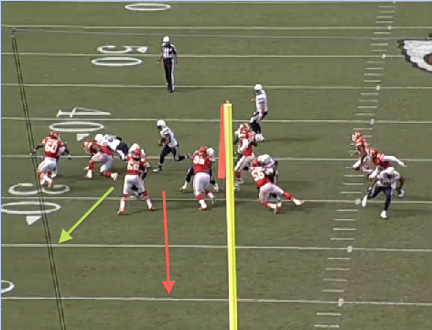 Look at the pad placement Vazquez has on the Linebacker, pushing him outside. Check the inside arm Hardwick has on Jackson, walling him inside. This play should have hit the "2" hole, not the "4" where Ryan takes it. Beyond the initial read, the 2 hole gives Ryan an angle to runaway from the DB lurking just outside the frame of this snapshot.

Instead Ryan charges headlong into the D at super duper warp bam bam speed. This leads to him missing a that could have netted him an additional 7-10 yards at least.

So we're at -20 yards, with the added bonus of an avoidable huge hit.

Ryan's not the only one to blame for the sad state of our running game. Take a look at this play. Focus on the pathetic excuse for a fullback.

A real fullback that gets even a glancing hit on the charging linebacker nets Ryan another enormous hole and an additional 7-10 yards.

Why is Ryan cutting directly at the Strong Safety when he has a blocker on Eric Berry on the left? If you know the answer to that one, tell me.

Tally all that up and we have -36 yards that Mathews (and McClain) left on the field. How many did Ryan tally for the game?

Time to get his grind on in the film room, right?

I plan on beating this horse into the ground in subsequent posts, but John would kill me if I did 16 straight posts on Ryan Mathews in a row. We'll see how it shakes out...