A History of the San Diego Chargers, Part 5: "The Pinnacle"

SDNativeinTX tells the story of the San Diego Chargers' one and only "World Championship."

Share All sharing options for: A History of the San Diego Chargers, Part 5: "The Pinnacle"

I was born in San Diego in 1962, where I lived until 1990, and continued to visit frequently until 2005. In all my travels around San Diego County and Southern California, I never visited the town of Boulevard. This town, located about 10 miles east and slightly north of Campo, is where the 1963 Chargers would pay the price for the failures of the 1962 team. Along with organized weightlifting and anabolic steroids, the team was subjected to a near–hellish training camp in the middle of nowhere. As it turned out, Rough Acres was the incubator for the team’s only League Championship Season.

Rattlesnakes, fields where grass refused to grow, temperatures in the high 90’s to low 100’s, a constant hot wind, and isolation were some of the special amenities of “Rough Acres”, a failed dude ranch just outside of Boulevard. There were exactly two rooms with air conditioning at Rough Acres; Gillman used one and the other was used by newly–signed free–agent QB Tobin Rote1. Dust, driven by the incessant hot wind, would often fill the players' bunks. To describe the conditions as “Spartan” is only the beginning. Stories from that time indicate that 7 rattlesnakes were killed at Rough Acres during training camp. 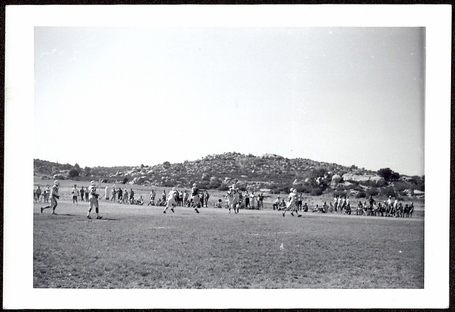 To get a feel for what that camp was like, we have a fantastic personal history from Ron Mix. His diary of that training camp — published in SI in November of 1963 — gives us an amazing insight into professional football in the early 60’s. It even includes descriptions of the team, and kind of a glimpse at society in the United States some 50 years ago. I strongly recommend taking the time to read it. There is also a description of the camp and first part of the team’s season from “Full Color Football”, the documentary about the AFL produced by Showtime:

The season began on September 8, 1963 with a 14-10 win over the Buffalo Bills at Balboa Stadium. Contrary to the legendary status this team has gained over the years, the team was not quite the dominating juggernaut that has been created with each retelling of the story of the 1963 season. The Chargers played in many close games, lost to the Oakland Raiders twice, and got blown out 50-34 in Denver by the Broncos, one of the worst teams in the league at the time. Those were the only 3 losses for the team in 1963.

Looking at the wins, the big advantage with this team seemed to be that it could find a way to win. A case in point was during the 3 game east coast road swing in November. In the most lopsided game the team played during the season, they simply crushed the Jets 53-7 on November 2. The next week, the team would score its fewest points in any game that year with a 7-6 win over the Boston Patriots. The following week, the team won 23-10 over the Bills.

Statistically, the '63 team was just dominant, which may partly explain the legendary status given to them. The offense was number one in the league in both yards and scoring. The defense was number four in yards allowed, but number one in scoring defense. The Chargers road record was 5-2; the home record was 6-1. The offense led the league in rushing and was 3rd in passing yardage.

The team had so many standout players. On offense, Rote was the starting quarterback and in his only season as a starter with the Chargers, he was the All–AFL selection at QB. Lance Alworth stayed healthy all season and was named league MVP, accounting for 1,205 receiving yards. Paul Lowe rushed for 1,010 yards — remember, this was only a 14–game season — including a 5.7 YPC and “fullback” Keith Lincoln chipped in another 826 yards and 6.2 YPC line.

The defense was still anchored by Faison and Big Cat Ladd. The linebackers that year were also excellent, Emil Karas, Chuck Allen, and Paul McGuire. The star in the secondary was Dick Harris with 8 INT’s that year.

The last part of the season was delayed by the assassination of President Kennedy on November 22, 1963. The Chargers cemented their 1–win margin of victory in the AFL West by crushing the Broncos 58-20 at home on December 22.

The championship game was further delayed by the Patriots and Bills having to play a tie–breaker game to determine the winner of the East Division. For the Chargers, though, their 11-3 record was good enough to hold off an Oakland team that went 10-4 and held the tiebreakers over the Chargers. For the 3rd year in the four year history of the AFL, the Chargers would get a shot at winning the League Championship.

Preparing to Win a Championship

Once he knew his players would be facing the Patriots, Gillman dusted off the back of the playbook and put together a game plan that emphasized deception, short passes to the Tight Ends and Fullback, and misdirection by faking handoffs to Paul Lowe and then really handing the ball off or pitching it to Keith Lincoln. Gillman had noticed through film study that the Patriots liked to blitz and hoped his game plan would take advantage of that. Gillman dubbed it the “Feast or Famine” game plan. I suspect that another objective of Gillman’s was to ramp up the intensity of his team to get a victory in a Championship game.

For Keith Lincoln, it was a feast indeed:

349 yards of total offense was set free by Lincoln that day. His performance in that game was ranked #20 of the “Greatest Playoff Performances” by ESPN. (I call East Coast bias.)

The game was basically over by halftime with the Chargers up 31-10. At the end of the day, the Chargers were League Champions after beating the Patriots 51-10 on January 5, 1964. That season remains the sole League Championship season for the Chargers in their 53 year existence. In just four years, the team had finally reached the pinnacle.

After the game, Gillman challenged the NFL Champion Chicago Bears to a final game to determine the “World Champion” of football. Chicago Head Coach/GM/Owner George “Papa Bear” Halas refused. Gillman ordered that the Chargers Championship Rings had “World Champion” on them. Although the Bears turned down the “World Championship” Game, the idea did get the attention of a few TV network sports programming executives and owners from both football leagues. 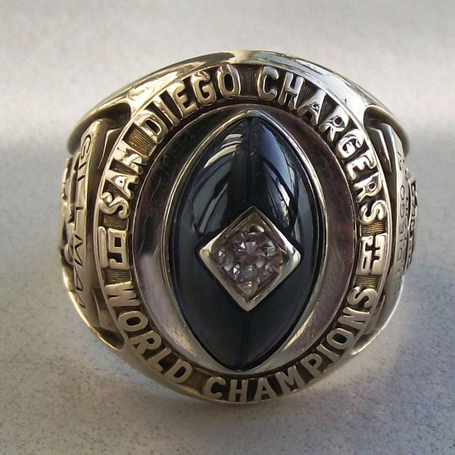