Bolts Ballers: A Selection of San Diego Chargers from the 1965 Topps Tallboy's

In 1965, Topps would create some of the most recognizable cards ever released. Lucky for us, the Chargers are some of the best looking from the release. Let's take a look at some of the historic "Tallboys" then, some of the 2012 "mini's."

Share All sharing options for: Bolts Ballers: A Selection of San Diego Chargers from the 1965 Topps Tallboy's

Did you ever collect baseball and football cards? If you grew up in the 1980s and 1990s, there's a good chance you did. Perhaps some of you gents in my father's generation were lucky enough to be around during the AFL days and the first ten years of the Sid Gillman era Chargers? If that's you, I'm sure you have at least one torturous story that goes something like this, "yep, I had that card…gave 'em away when I moved out of my parents home," etc.

So, back then, as a wee lad, I was primarily collecting baseball cards and comics. Fast-forward a few years, and football cards would become an irreversible part of the mix. I'm a life-long San Diego fan, bleeding Chargers blue 'n gold, so that's what my football card collection focuses on (along with the occasional complete set).

Like many, high-school brought new and exciting distractions; college, even more so. Cards went the way of the dodo. 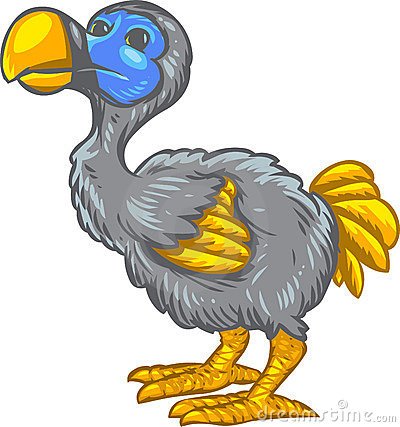 Then, a few years ago, a couple of boxes arrived in the mail from my mother. She'd discovered my cards and sports memorabilia and sent them my way (thankfully, instead of dumping them into the "mixed recyclables" bin). I never would've guessed it, all those years later, but these unexpected packages sent me down nostalgia's yellow brick road and, 20-years after it all began, I'm a cardboard collector again.

In some ways, the card collecting hobby hasn't changed all that much, at least at the fundamental level: the cards are still cardboard, there are still great images being printed of the players on the front, and on the back, most often, follow the stat lines. Those are the ways in which things have remained familiar and, in a sense, timeless. As far as the changes go, good luck finding much of a selection of card shops to visit! Of course, cards trade hands through online outlets at this point, though what I've discovered since entering the active waters of the sports card blogosphere is the trading community is alive and well. Additionally, the cards have taken on a sophisticated mastery of design and desirability with rare inserts, on-card autographs, jersey and ball relics, etc. These new, flashy and sometimes incredibly rare cards (numbered 1/99, 1/49 and even 1/1) have usurped the value, and for many, the desirability of the lowly "base" card. To be clear, I disagree and there are many out there --- the last of the cardboard collecting Mohicans, I guess --- that feel similarly. Not being invested in the hobby for financial gain, but enjoyment, has it's upside.

All that shared, while the new is exciting, the vintage cards have maintained their stature as giants in the hobby for a great many. Standing above the rest is the great 1965 Topps Tallboy set. While the standard card, throughout the modern period, has been 2 1/2" x 3 1/2", the Topps Tallboys stand out at a unique 2 1/2" x 4 11/16". Now, while I don't have the complete Chargers team set, I do have a couple. Those that I'm going to share today are four that feature Bolts Ballers, players posing with the ball in their featured photo.

Why save the best for last? My favorite from the set, and arguably the greatest San Diego Chargers football card of all time, I present to you the 1965 Topps Earl Faison: 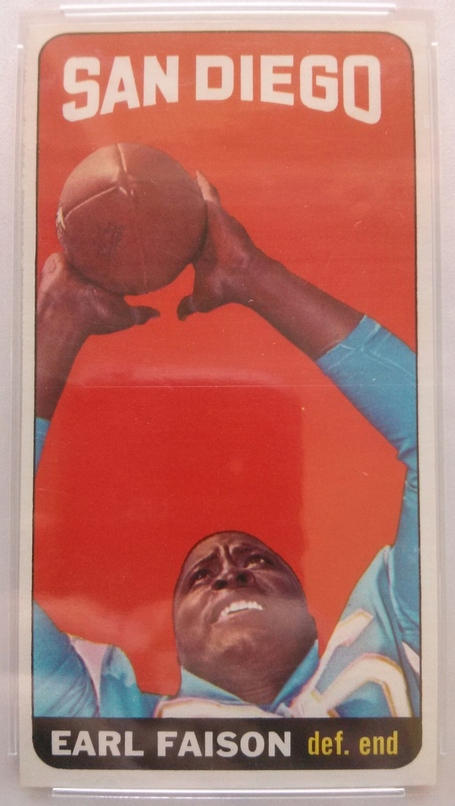 Isn't that a beauty?!

Really, how good does this card look?! Oh, let me count thy ways:

1. That's a big-time card, featuring one of our big-time players. This one earns the title of "tallboy."

2. The font is classic. "San Diego" has never looked so good…

3. Powder blues! Not only is that the original "throwback" jersey, it's long-sleeved!

4. Finally, look at the framing of the image used: Faison is barely on the card and yet what of him that is included makes the strong case for an instant classic football card.

Now, contrary to the most common type of stat-line back, this year they would include a brief write-up of the player with a "corny" cartoon, to use what I imagine to be 60's parlance. For example, the flip-side: 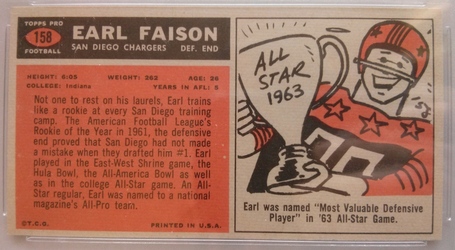 Overall, regarding the 1965 set, the Joe Namath is one of the most sought-after cards, period. Ok, ok, the Namath is a good looking card (I refuse to share the image here, on my Chargers-specific card post, but if you haven't seen it…). No matter how much controversy this will stir up, I say this Faison trumps it based on the framed image and our Chargers powder blues. 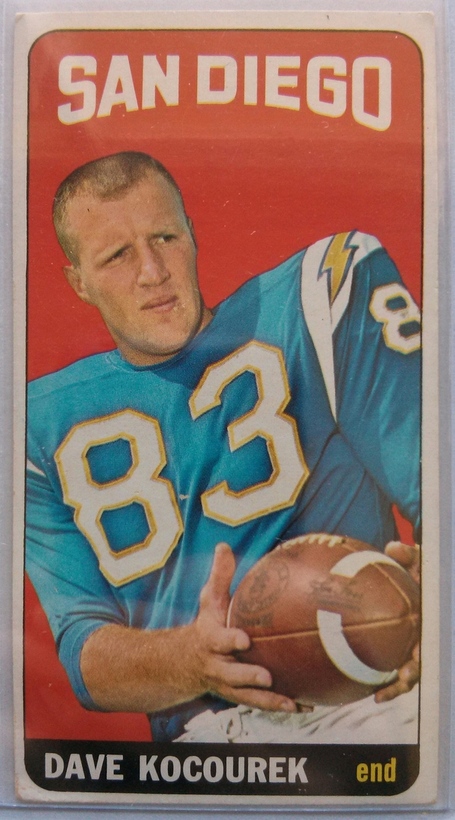 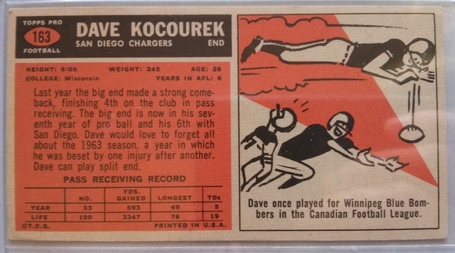 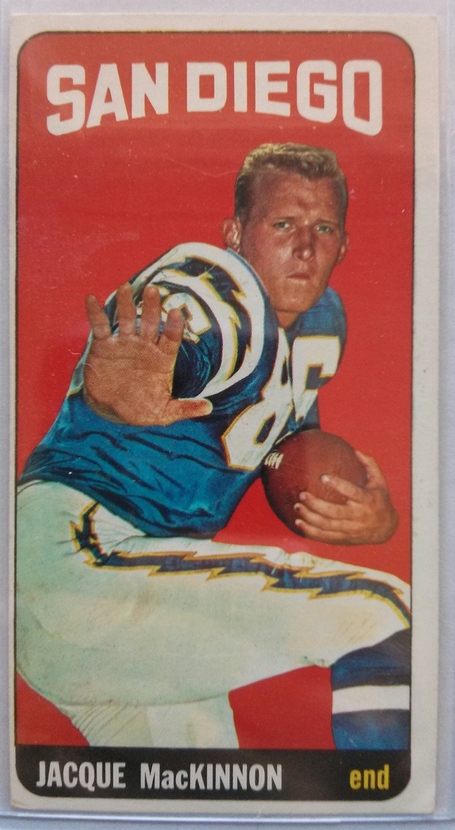 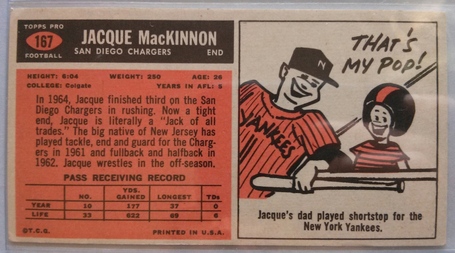 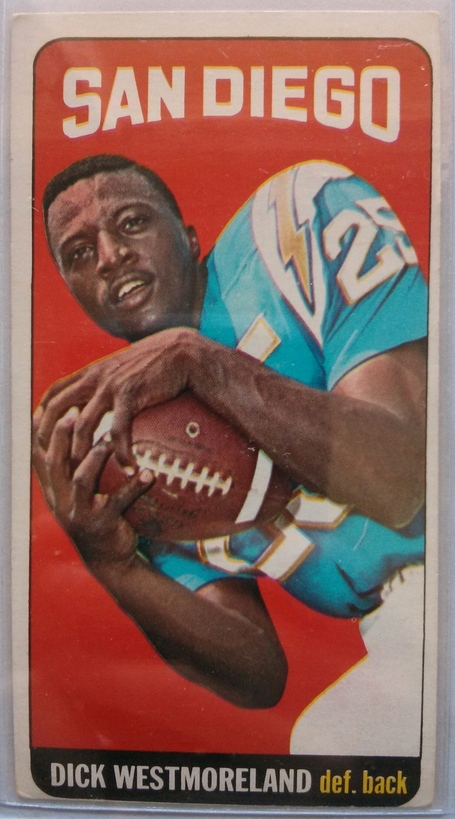 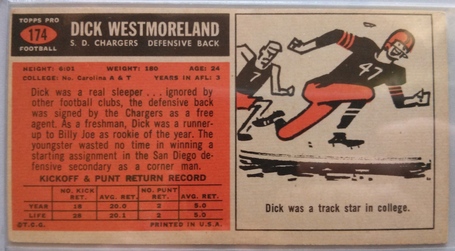 Last year, in 2012, Topps drew from the inspired Tallboy series and created a mini set, both in terms of actual card size and the numbered set of cards, totaling 141. This revamped set of tallboys feature a scaled down imitation of the 1965's and, while appreciated by many collectors, including this one, they're reduced to silly imitations when placed side-by-side with the originals. Anyway, Topps made a great decision to mirror the original design on the front, as well as with many defining aspects seen on the back. For example: 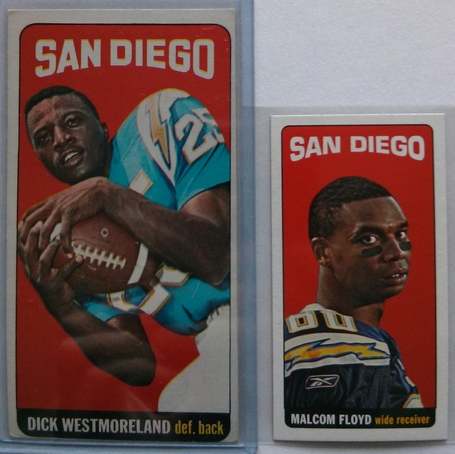 See what I mean?

Nevertheless, here are the Chargers that form the team set in the mini-Tallboy run of 2012, though none feature an image with the ball: 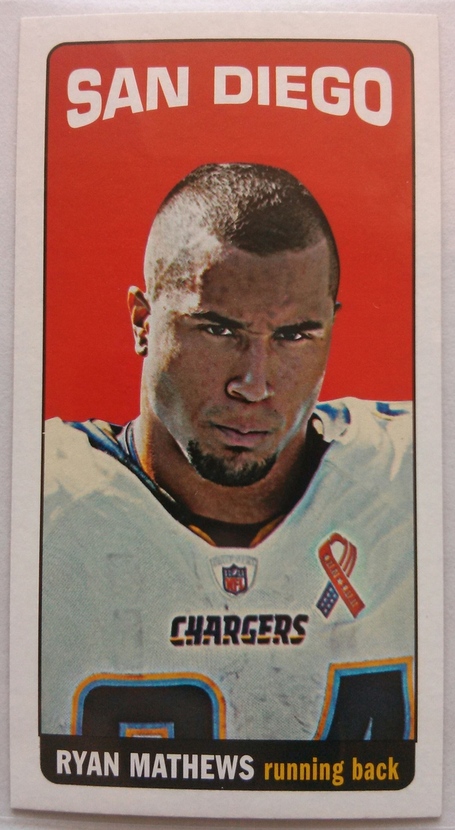 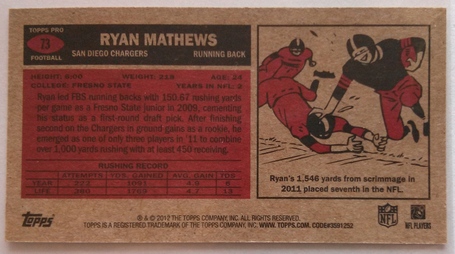 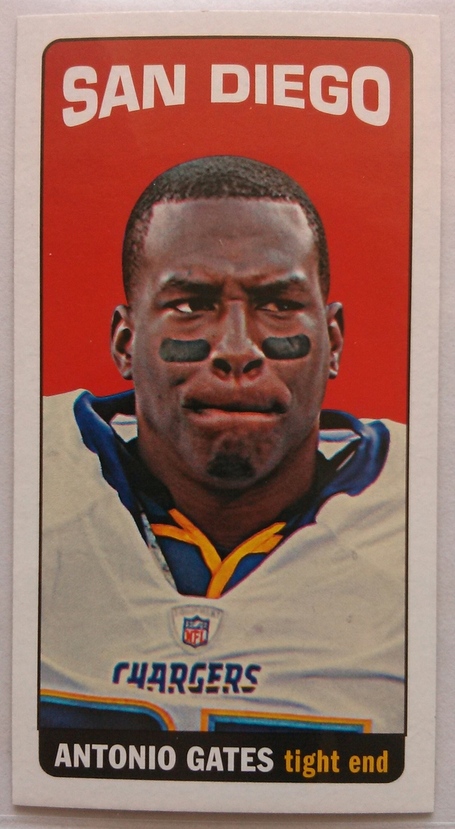 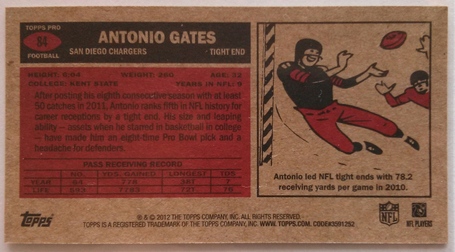 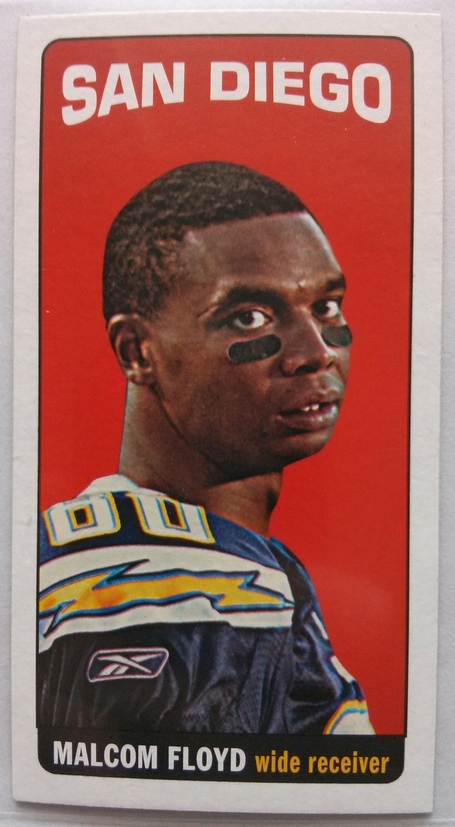 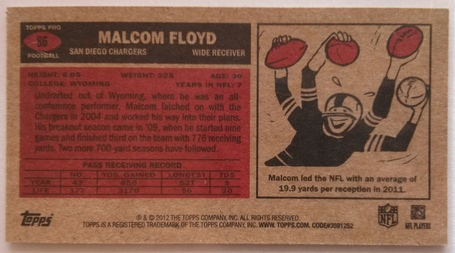 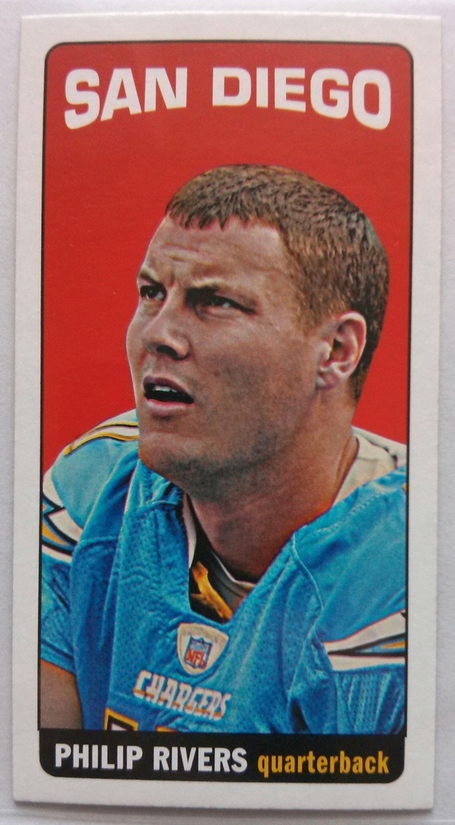 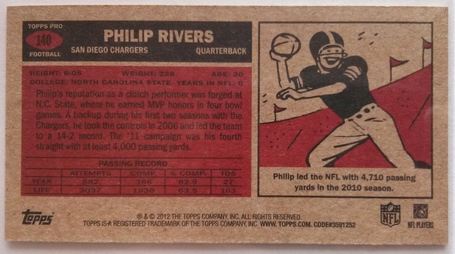 If you've remained a collector, let me know what you're fired up about these days, be it vintage or recent/upcoming releases.

If you've never been a collector or once were but aren't any longer, share what's on your mind, anyway!