Thought Experiment: Where would you draft Robo Punter?

Where we all state where we'd a select a punter capable of putting Mike Scifres to shame.

Share All sharing options for: Thought Experiment: Where would you draft Robo Punter?

Ok, go with me on this one. Suppose some punting savant, hereby named "Robo Punter", comes along with the ability to punt the football (in an unblockable way) out-of-bounds at the 1 yard line every time. How valuable is that guy and, more relevant to this time of year, where would you draft him?

Brian Burke from Advanced NFL Stats has done a large volume of work over the years regarding field position and expected points added (EPA). We can leverage his work -- in particular, the chart from here on WPA posted below -- to come up with a ballpark estimate on how much a player with Robo Punter's abilities affects the game. 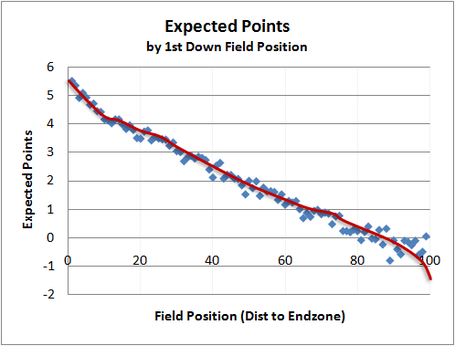 Here's a basic way to interpret this chart: if the Chargers have a 1st down 40 yards from the endzone, they have a positive expected points of +2.5. If they were to fumble at this exact point, their opponent would get the ball 60 yards from the endzone, with an expected points of +1.4. From the Chargers perspective, this fumble costs the team 2.5 + 1.4 = 3.9 points. With this basic framework, we can now have some fun with Robo Punter.

That statement above regarding punting on first down whenever you're inside your own 45 seems like an absurd statement. In fact, it is for some teams. Good teams will have lifted expected points plots than the league average presented above, so they may not want to punt on first down unless they're inside their own 30 or more. However, for bad teams the yardage at which a punt makes sense on first down could be in their opponent's territory!

On thing is clear: if Robo Punter ever exists, the NFL is going to get mighty boring.