Is Twitter telling us that the San Diego Chargers have signed Green Bay Packers LB Brad Jones, or is it just a misunderstanding?

Brad Jones, Linebacker for the Green Bay Packers, grew up in East Lansing, Michigan. He is currently an unrestricted free agent, and the San Diego Chargers needs an Inside Linebacker with his particular skillset. That makes this awfully curious: 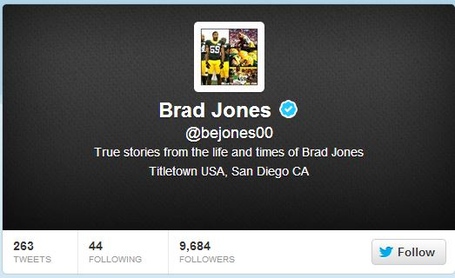 See the "San Diego CA" part of his bio? That's where professional athletes usually list the city that they live in or some made up place like "Stankonia". Unless Brad has a home in San Diego (which would be somewhat random) that he's very proud of, this could be an early sign that he's signed with the Chargers.

I asked the only Packers expert I know:

That's a very good question... RT @bftb_chargers: @acmepackingco Did Brad Jones have "San Diego" in his Twitter bio before?

If you can provide any further insight into why Brad Jones might have "San Diego CA" in his Twitter bio, or you have proof that it was something else a few days ago, let us know in the comments!

So...yeah....probably it's a misunderstanding. Still seems like that would be a good thing for the Chargers' pursuit of the Linebacker.