The San Diego Chargers organization and players have fought back against the NFLPA's request to replace David Chao as the Team Doctor.

Remember two weeks ago, when it seemed like the San Diego Chargers were finally going to be forced to get rid of "Doctor" David Chao? Of course you remember. I was dancing! Well, I'm dancing no more.

Three independent doctors have unanimously ruled the Chargers' doctor is "totally exonerated" from a player union protest he is unfit to serve in his current role, a club source said Saturday.

A "club source", eh? You mean someone that might benefit from Chao being "totally exonerated" called up Doogie Gehlken and told him that Chao had been "totally exonerated"? Well, that's that, I guess. Can't argue with facts. Especially when those facts are "totally" true.

I'm not sure this changes the fact that "Doctor" David Chao is a drunk, or that the California state medical board has tried to take away his license to practice medicine, but maybe it does. Maybe it changes the fact that more than a couple of former Chargers players have sued "Doctor" Chao for malpractice, including Ryan Leaf, and settled out of court with him. Maybe it doesn't.

I went on 619 Sports with Craig Elsten last weekend and finally let out the big secret as to why "Doctor" Chao is still around, and it's not due to blackmail. Plain and simple, the players love Chao. They respect his skills and they even like hanging out with him: 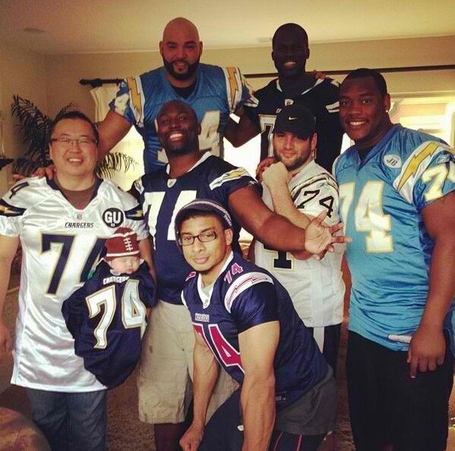 After all that waiting, why did I finally reveal that the players love Chao? Well, it's because the players were going public with their love. From that same Gehlken article:

Said quarterback Philip Rivers this month: "I have no complaints of the care Dr. Chao has provided me."

In summary, the NFLPA takes the stance of the fans and much of the media: "Doctor" David Chao has a poor enough track record that he should not be allowed to hold the prestigious job of NFL Team Doctor. The San Diego Chargers and their players, including the face of the franchise and the team's NFLPA representative, love Chao and don't want him to go.

The ongoing conversation going on between DeMaurice Smith and Nick Hardwick must be awfully entertaining.