Kyle Posey is doing positional breakdowns for each match-up in the upcoming match-up against the Bengals, starting with the most important, the Chargers OL vs. the Bengals DL

The Chargers beat the Chiefs practice squad; big deal. In typical Charger style, they made it much more interesting than they should have. I don't feel like we need to spend much time on that game, so I want to dive right into next week's playoff matchup against the Bengals. I'll be doing a positional series, starting today with arguably the biggest match-up, the Chargers offensive line versus the Bengals defensive line.

A lot has changed since their week 13 match-up. King Dunlap was still out, and D.J. Fluker might have had his worst game at left tackle. Johnnie Troutman was at left guard, struggling in the run game, and Chad Rinehart was playing right guard, where week 13 just so happened to be the only game he gave up a sack all season.

From a DVOA standpoint, week 13 was the 4th worst offensive game San Diego played all season, make no mistake, not having their five starters had a lot to do with that. As well as the Chargers offensive line has played, the Bengals defensive line has played just as well. Based on the following chart, the match-ups seem pretty even.

Let's get into the individual match-ups:

In the previous match-up, Johnson was incredibly disruptive in both the pass and running game. He totaled six pressures vs. Fluker. Johnson is listed at 6'7", 266 pounds. He's more quick than fast, with ridiculously long arms. Week 13 he beat Fluker on a little up and under move and came this close to a strip sack. What makes Johnson so good is he uses his arm length to his advantage and makes plays either in the back field or at the line of scrimmage. 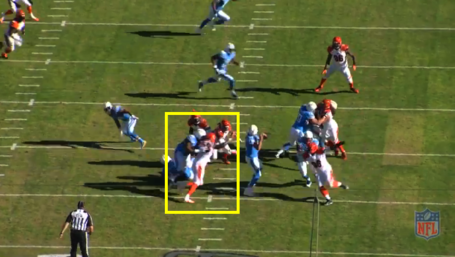 Dunlap is a much more patient blocker than Fluker, he doesn't try to take your head off every play, but is just as effective without being the mauling type. Here's a good example of what I mean. 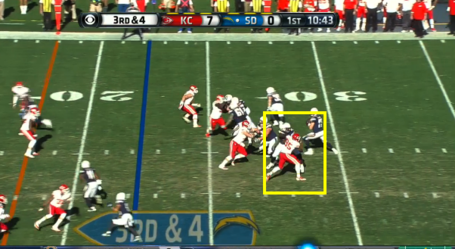 At 6'9", Dunlap has go-go-gadget arms, and can combat rushing linemen with a very nice initial punch. That's what he did in the above picture. His punch here is so strong it knocks #95 off balance. That's why Dunlap has been so good for the Chargers this year, he wins early, and by the time the defensive lineman can counter, the ball is already out of Rivers hands.

This might be the most even match-up of them all. Both are abnormally tall players who are both very good on every down. I don't think there is a clear cut favorite to who is  the better player this year.

If you believe in Pro Football Focus' grades, Rinehart is currently graded out at -1.4 for the season, and Thompson is graded out at -6.4 for the season. When I watch the Bengals, Thompson is very quick out of his stance, sometimes it seems like he knows the snap count. Here's the problem, he fires off so fast, that he loses his leverage and is a non factor in the play. Countless times, he was either washed out of the play, because the lineman took him where he wanted to go, or he was on the ground within seconds of the snap. 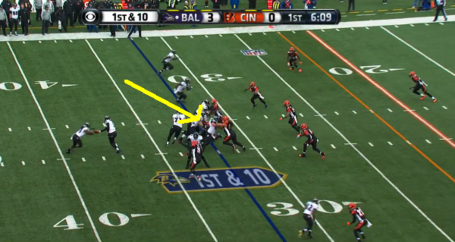 He's on the ground before the ball is even handed off.

I don't want to say Rinehart will have his way with him because the few times Chad has struggled this year is when he's had to face 300+ pound DT's, but Thompson isn't at the level of the Chiefs DL, Jurrell Casey, or Terrance Knighton. Rinehart is another very sound lineman who just does his job, nothing flashy, just effective. The only time he gets in trouble is, like most linemen, when they play too high. Let's look at his sack allowed in Week 13. 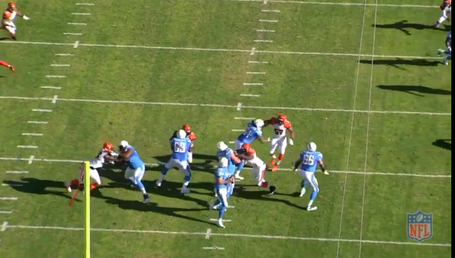 The DL was able to walk him back into the QB pretty easily, as he just got under his pads and drove him.

I do believe this match-up favors the Chargers. Thompson offers next to nothing as a pass rusher, Michael Johnson had as many pressures week 13 vs. the Chargers as Thompson has had all season. San Diego will do itself a favor by passing on early downs while Thompson is still on the field. On average he plays 35% of the snaps a game, but he did play over 61% last time the two teams met.

A big reason San Diego has had so much success has been the play of Hardwick. Not only is he calling the protections pre-snap, but he's been positively involved in the action after the snap. The good teams slide their protection, and use their "weak link" as an "extra blocker," if you will. Hardwick has been as steady as ever this year. He hasn't allowed a sack and has worked in tandem with RG Jeromey Clary on run plays beautifully.

PFF has Hardwick at +8.5, which is 11th best for all centers. They also grade Peko at -14.8, which is 64th out of 67th for all DT's. Hardwick's ability to move laterally is an advantage over Peko, he was able to cut block him a few times in the previous match-up. More importantly, his ability to get underneath his pads and drive him, opened up running lanes for Ryan Mathews. 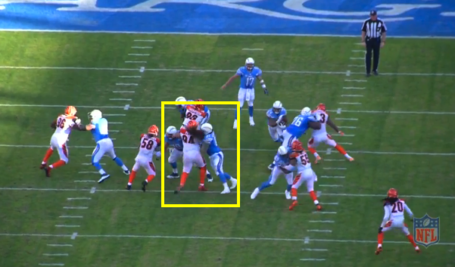 Hardwick has the clear advantage over Peko. I'm pretty confident in saying that. Peko plays about 60% of the snaps, and played 64% last time the teams met. When he's not in the game, Wallace Gilberry takes his place as a pass rusher. He's the player who sacked Rivers above vs. Rinehart.

This won't be so much in the running game, but strictly on passing downs. When I mentioned above that the Chargers slide their protection, Clary is the one who is usually called upon as the extra blocker of the five linemen. Against a good/great defensive coordinator, like Mike Zimmer, expect to see tons of games upfront that are directed at Clary. PFF has Clary at -19.4, which is good for 71st out of 79 who have played the position.

Clary struggles mightily when he's asked to pull. His balance and footwork is a mess. This also shows up when he's asked to block 1-on-1. He puts his head down, and lunges. He also has a bad habit of letting defenders cross his face, thus blowing up the run play before it starts.

For the sake of the holiday spirit, and the positive playoff vibes we have going on, I'll just leave it at that.

He'll be asked to block Gilberry in passing situations. Gilberry is a very capable pass rusher. At 267, he's athletic enough to stunt around the outside, and get home for a sack. He has 9 sacks this year, and has generated a good amount of pressure as a situational pass rusher. He would lead the Chargers in sacks/QB hits/pressures, and he's only playing 47% of the time.

The good news for Clary, other than the sack above, none of Gilberry's other sacks did he win off of a great move. He either came unblocked or got a coverage sack. Either way, Gilberry has the advantage here. Clary will have his hands full, though it's not a mismatch, because Clary has held his own on passing downs, but he'll have to avoid any penalties. Clary has had 1 penalty each of the last 3 games.

Dunlap is a great talent. I think it speaks volume to his athleticism that Zimmer drops him into coverage at 277 pounds. It's happened 26 times this year. That tells you 1) They run a lot of zone blitzes and 2) Dunlap has the ability to cover a lot of ground. Dunlap is great against the run. He does a good job of not only setting the edge, keeping everything inside of him, but also finishing the play. He's 6th in the league in stops(a tackle made which constitutes as an offensive failure) at 38, 5 more than his teammate Johnson.

To go along with that, Dunlap also has 9 sacks, and 16 more QB hits than any other Charger, at 20. Because he's a complete/smart player, he also understands what to do, when he can't get to the QB. 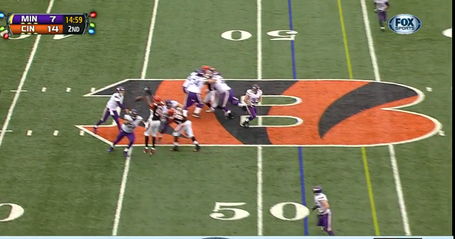 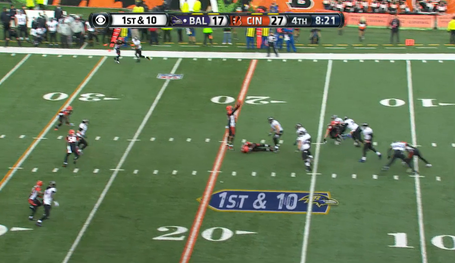 As for Fluker, it's simple. When he's patient, he's excellent. It's when he starts to play "fast" and over extend that he gets in trouble. Because he wants to put you in your grave every play, that's where he has struggled in the run game as well. 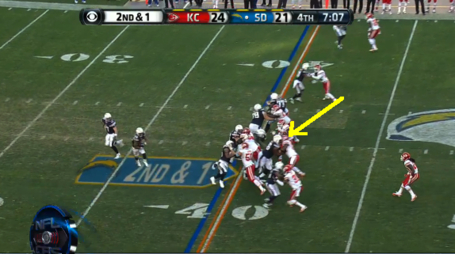 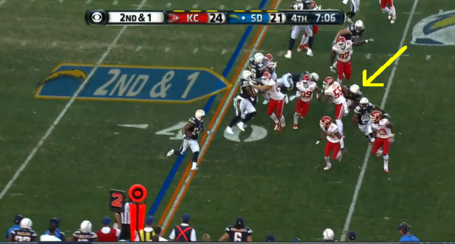 When he lets the game come to him, he can drive his man 5 yards off the ball every time. 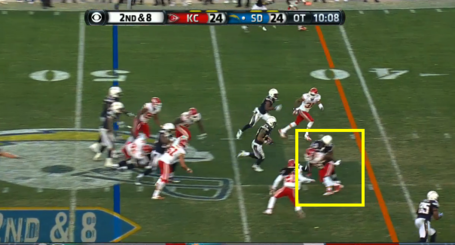 Carlos Dunlap has the experience factor, and has the advantage in this match-up.

Who Is Better Overall?

Five match-ups, one push, two in favor of the Bengals, two in favor of the Chargers. Which goes back to the chart, this is about as even a match-up as you could imagine. It will come down to who executes better, and who plays the cleanest game. I believe whoever wins this match-up will win the game next Sunday.