Breaking down the draft value the Chargers stand to gain by losing, and examining just how much draft value they've lost by winning in similar scenarios in the past.

Should the Miami Dolphins win this Sunday morning, the main reason why I'll be rooting for San Diego Chargers loss is because of the additional draft value this brings the Chargers.

Before getting to how to quantify that, though, let's actually review what happened to the Chargers in weeks 16 and 17 over the past three seasons...where, you know, they won these meaningless games.

In case you've forgotten, the Chargers have won several "meaningless" games since they last reached the postseason in 2009. In each case, the Chargers clearly lost draft value, while in several other cases they also directly aided the draft value of their most immediate rivals. Rather than simply decreeing that to be so, let's review each season on a case-by-case basis:

In 2010, the Chargers beat the Denver Broncos in a meaningless week 17 game, having been eliminated from the postseason in the previous game - a loss to Cincinnati. Had the Chargers lost that game, their draft position would have been largely unaffected, moving up just one slot from 18th to 17th.
Perhaps the Chargers would have taken the 17th pick in that draft, Nate Solder, over Corey Liuget, but I doubt it; at the time, the Chargers still believed they had a serviceable offensive line, and they didn't select an o-lineman until round six. It's debatable if Solder is any better than Liuget, anyway.
However, by losing to the Broncos, Denver's draft position improved from pick five to pick two, which allowed them to pick Von freaking Miller. Granted, Patrick Peterson, Julio Jones, Aldon Smith, Robert Quinn, and J.J. Watt were all among the possibilities at pick five, and they would all have been excellent selections for Denver.
But maybe - just maybe - John Elway decides to draft his quarterback at pick five: Jake Locker, Blaine Gabbert, or Christian Ponder. They probably wouldn't have, but who really knows. What we do know is this: Von Miller was widely believed to be the best player in that draft and Denver was gifted the no-brainer decision to select him when the Chargers beat them in a meaningless week 17 game back in 2010.

The value lost in this meaningless win

Now that we know the specifics of what winning those games late in 2010, 2011, and 2012 meant anecdotally, it's time we put an actual mathematical value to what the Chargers lost by winning.

Below is the trade value chart widely circulated around the internet, roughly depicting what each slot is worth (in a pretty arbitrary unit, I must say) when teams are considering trading up/down in the draft: 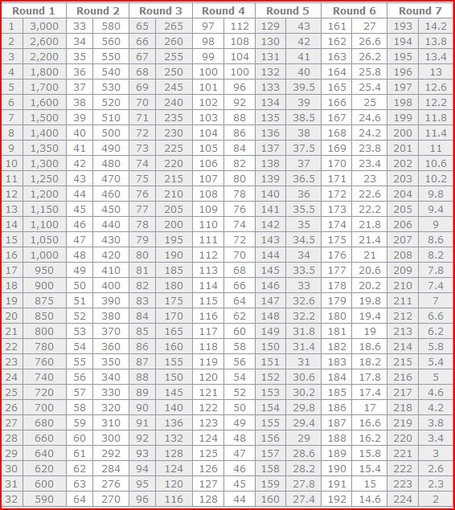 For those unfamiliar, here's an example of how this works: if the team selecting 20th (in every round) wanted to acquire the 10th pick in the draft, they would be expected to offer a trade whose assets total 1,300 units...the value of the 10th pick according to the chart. A package that the 20th team could put together that would be a fair offer would be its 1st round pick (worth 850 units), its second round pick (worth 380 units), its fourth round pick (worth 62 units), and its seventh round pick (worth 6.6 units). The team with the 20th pick would be giving up four picks with a combined value of 1,298.6 units for one pick with a value of 1,300 units.
With that framework, let's apply how winning these games late in the year affected the overall trade value of the San Diego Chargers' draft classes.

Last year, the Chargers late season win meant the team would select 11th instead of 5th. The difference between the two slots - 563.8 units - is basically equivalent to the value of the 2nd pick in Round 2 and represents an overall draft value reduction of 21.3%.
Yes, you read that right. Basically, by winning the meaningless game at the end of the season, the Chargers forfeited assets that could have (theoretically) netted pick 2.2 in addition to the Chargers current crop.
By the way, the player who went at that selection caught the game winning prayer for the Tennessee Titans that defeated the Chargers in week three: Justin Hunter.

It is certainly true that, historically speaking, picks towards the end of the first round have been a better bang-for-the-buck than picks at the front of the first round.( But remember, most of that analysis applied to the old CBA, where rookie salaries were drastically higher than they are under the new agreement. We don't necessarily know if this still holds.)

Here's that trick in action:

Let's say teams must reach 100 "talent points" with their $100 payroll in order to have a competitive roster. "Talent points" here is basically some theoretical abstract way of quantifying how much a player helps a team win, and 100 is an arbitrary value I chose for neatness purposes.

Team A, selecting first in five consecutive seasons, exactly fills their talent quota by paying all $100 of their payroll to their draft selections. This team is paying $1 per talent point.

Team B, selecting 20th in five consecutive seasons, would have just 37 talent points (the value of pick 20's draft is just 37% that of pick 1's) since the relative talent levels of the selections are drastically different. Yes, Team B would have a better bang-for-their-buck in regards to their draft selections, perhaps paying just $0.80 for each talent point. However, this team would now be required to add 63 talent points in free agency at a cost of $71.4, or just $1.13 per talent point. Are any of you naive enough to believe that the inflation in free agency is so little? Just consider how many other teams would need to reach their quotas and how much money they'd have leftover, too...

Of course, the 100 talent point value I chose above was an abstraction. Depending on where that quota is, teams' dependency on free agents to fill the missing talent shifts inflation. However, based on the current prices that mediocre and objectively below-average players go for in free agency, it seems pretty clear that inflation would not allow Team B above to compete. And based on NFL front office's pretty much following the draft value chart, I'm inclined to believe that the theory above holds: even though some worse picks have better bang-for-the-buck does not matter since it forces you to fill needs in free agency at a cumulative worse deal.

And remember, even if it weren't true, there is nothing preventing the Chargers from attempting to trade down in the draft, collect some portion of the extra value added through the loss, and still have that exact same bang-for-the-buck selection anyway.

Historically, the Chargers have left a ton of value on the table by winning otherwise meaningless games in weeks 16 and 17. The one season in recent history where the victory didn't cost the Chargers much in terms of draft value, it delivered an unbelievable benefit to the team that now sits atop of the division standings.

Currently, the Chargers would select 16th in the NFL draft. If they lose out, they could move all the way up to pick 9. If they win out, but miss the playoffs, they could actually end up with the worst non-playoff selection: 20th. That's a draft value chart difference equivalent to the 8th pick in Round 2. If the Dolphins win, would you really want these wins so badly that you'd be happy if the Chargers traded the 8th pick in Round 2 to acquire them? That's what you're potentially rooting for.

It's easy for some of us to ignore that in cheering on the Chargers against the hated Oakland Raiders. For others, it's a frustrating realization that the best thing that could happen for the Chargers' competitive aspirations, should Miami win early Sunday, is a Chargers loss.