Each week, we look back at the San Diego Chargers previous game to highlight which players performed above, or below, expectations. This week, we take a look at who is responsible for the Chargers' upset win over the Broncos on Thursday Night Football.

I know I've been beating it into the ground, but my only real concern about Mathews going into this game was how much he had left in the tank. His 236 carries through 14 games is the most he's ever had in a single season, and he carried the ball 54 times within 5 days. That's unreal. That's the type of 2-game stretch that could end up affecting the trajectory of a career.

Either way, Ryan Mathews has been a star this season and is getting better every week. It makes total sense, heading into the end of the season, to think of him as one of the Top 5 running backs in the league this season. Before the season, that was nothing more than a pipedream. And this was his statement game, in front of a national audience against a tough division rival.

This game was, without a doubt, the best and most important performance of Ryan Mathews' career.

A funny thing has happened over the course of the season with Keenan Allen, as well. As he's racked big games and highlight reel catches, defenses have begun treating him as if he's A.J. Green or DeSean Jackson. He's regularly bracketed by a cornerback and a safety, which means that he's no longer finding himself open as the 2nd or 3rd option of a play. When Allen finds himself open now, it's because the play was designed to get him open as its 1st option.

The awesome part is that the Chargers offense has someone worth of crazy attention by opposing defenses again. During the Chargers' heyday, they succeeded because opposing teams had to try to double-cover Vincent Jackson, Antonio Gates and LaDainian Tomlinson. Now, with teams double-covering Allen and still having to account for Gates, it's opening up big plays for Mathews.

On Thursday night, Allen was exactly what San Diego needed him to be. He won every single 1-on-1 matchup, pulled the defense away from Ryan Mathews, and was a reliable target to get in the end zone when the team found itself in the red zone.

Hey now, there's the Vincent Brown I remember falling in love with during 2012's Training Camp.

I've taken accustom to calling him "Vinnie Brown" this season. The name Vincent just didn't seem to fit someone that was so consistently running the wrong route, dropping the ball, slipping on the turf, and being out-toughed in a fight for the football.

Brown is another one that has been getting better with each week that Keenan Allen gets closer to being the best rookie WR in recent memory. He's been balancing out his bad plays with good ones, but on Thursday night the Chargers could afford no bad plays from him and there were none.

All three of Brown's catches went for first down, and his 32 yard catch on 3rd & 9 helped set up Mathews' touchdown run that gave San Diego a 14 point lead.

Look at the rollercoaster Corey has taken us on this season: 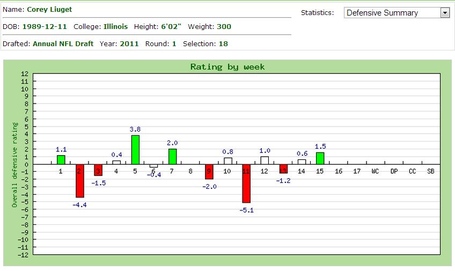 Those ratings are courtesy of Pro Football Focus.

In an up-and-down season that's more reminiscent of his rookie season than his dominant, and consistent, sophomore season, the good Corey showed up against the Broncos and helped control the line of scrimmage.

I know his stat-line isn't much, but he's a very large reason that the Broncos running game (which still averages 116.8 yards per game) was held to 18 yards for the entire game. On top of that, it was Liuget's hit on Peyton Manning (after beating a double-team) that led to the game-clinching interception by Thomas Keiser.

If I gave these awards to coaches, this one would go to John Pagano. This was the best game he's had as a Defensive Coordinator, and he really played to his team's talents.

Jahleel Addae and Darrell Stuckey played safety for most of this game, different from how the defense has played all season long, and weren't asked to do much more than play deep Cover 2. The cornerbacks (for the most part) trusted that those safeties would be there for over-the-top help, and spent much of the game playing tight man-coverage. Richard Marshall forgot about this during the 1st Quarter touchdown he gave up, but Shareece Wright stayed consistent all game.

Peyton Manning threw at Shareece Wright 8 times, completing just 4 passes for 50 yards. That's quite good against most QBs, and excellent when going against Manning and his stable of talented wide receivers.

Fine, I'll say it. He may have been as fragile as a china doll this season, but King Dunlap has been so good that he deserves another chance to be the team's starting left tackle in 2014. Don't spend a draft pick on a tackle, Mr. Telesco. Between Dunlap, Mike Harris, and D.J. Fluker, the position looks fine for the coming year. Picking someone to take time away from Dunlap won't help this team.

Dunlap has played in 9 games and is set to play in 11 by the end of the year. His injuries have mostly been concussions, with a neck injury that was obviously taken seriously because of the previous concussions, which are sort of "freak" injuries that can't really be predicted in the future. It's entirely possible that Dunlap plays all 16 games next season, and if he performs the way he has this season, he'll be one the league's 5 or 6 best left tackles.

Anyway, Dunlap has been great in almost every game he's played in this season, and he's getting better as the season goes along. Watching him dominate Von Miller 1-on-1 was a thing of beauty, and a great sign for the Chargers' future matchups against the Broncos.

John Pagano was a little slow to realize it, but the improved production from Marcus Gilchrist throughout the course of this season has been a direct result of him being used closer to the line of scrimmage and less in deep Cover 1 (where he's still rather terrible).

On Thursday, due to injuries and a fear about ever getting Derek Cox back on the field, Marcus put his old nickel cornerback shoes on and we saw all of the good/bad that comes with that. On quick plays near the line of scrimmage, Gilchrist's instincts are almost unmatched. He basically shuts down screens to his side of the field, he's a great run defender and a very dangerous blitzer as well (as we saw on his sack). However, when he's running down the field in man-coverage, he's just not very good.

Gilchrist is frustrating. His skills make him perfect near the line, but his inability to play man-coverage for very long makes him a liability of sorts when he's up there. His inability to play deep zone coverage make him a liability of sorts when he's back in centerfield, although he's getting better at that. This is the case of a talented player that needs to used the right way to hide his flaws, and he (mostly) was on Thursday.

Let's enjoy the last two games of the Jeromey Clary era in San Diego. This offseason, it will save the team about $4.5 million to cut Clary, and he's been a pretty terrible right guard. He was terrible again on Thursday.

Johnnie Troutman has earned either the starting LG or RG spot in 2014, I believe, and the other one will either go to Chad Rinehart or a draft pick. My money's on the latter, but a free agent is a possibility as well.

I sure am glad that Phillips' 3 year contract is cheap, because he's been an awful blocker and a worse receiver. He was useless in Thursday's game, regularly getting overpowered by linebackers on running plays.

It's not Reggie's fault. Him and Andrew Gachkar are two guys that should never be on the field for the defense, and there was Walker trying to cover WRs and TEs on Thursday night. Walker's actually been very useful for the Chargers this year, but he was usually the one responsible when Manning was finding guys open in the 4th Quarter.

The more the team can get Melvin Ingram on the field in place of Walker, the better they are.