Film Breakdown: The Drive that Beat the Broncos

Which drive would you say won the game for the Chargers? The real answer might surprise you. Kyle Posey goes play–by–play, breaking down the drive that San Diego put together to beat the Broncos.

Share All sharing options for: Film Breakdown: The Drive that Beat the Broncos

The only real chance teams have had this year to beat Denver is either scoring 4+ touchdowns, or holding them scoreless in at least one quarter. The Chargers managed to do the latter for two quarters. While this was the most impressive game the Chargers have played all year as a team, I'd argue the 3rd quarter was the most impressive quarter they've put together all year.

They received the kickoff after halftime, and drove 8 plays in 3:34 to score a touchdown, and the defense followed that up by forcing Denver to go three–and–out. But it was the ensuing drive — a drive which didn't result in any points —  that ultimately won the game for San Diego.

What this did was essentially force Peyton Manning and the Broncos to score two touchdowns in the 4th quarter. While Denver is very capable of this, the success that the Chargers were having on offense (just 1 three–and–out) put too much pressure on the Broncos, and eventually was the reason the Chargers won the game. 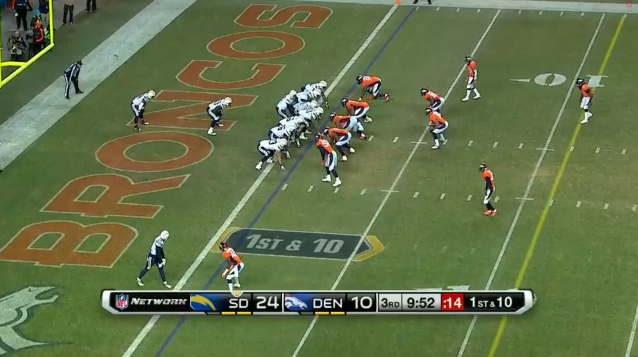 Mathews was able to find a crease in between Hardwick and Rinehart. 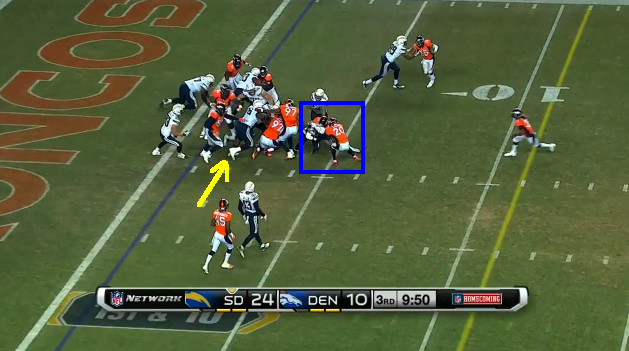 The arrow is pointed at D.J. Fluker — who was bullying guys all night — pancaking his man here. The square is Mathews, per usual, fighting his tail off and getting the maximum extra yardage possible.

Mathews rushed for 127 yards on 29 carries. Impressive, right? What if I told you ninety four of those yards came after contact. That's 74%; that's ridiculous. Speaks to the kind of hard–running power back he is.

Chargers stay in 22 personnel, and run a similar inside zone play over the left guard. 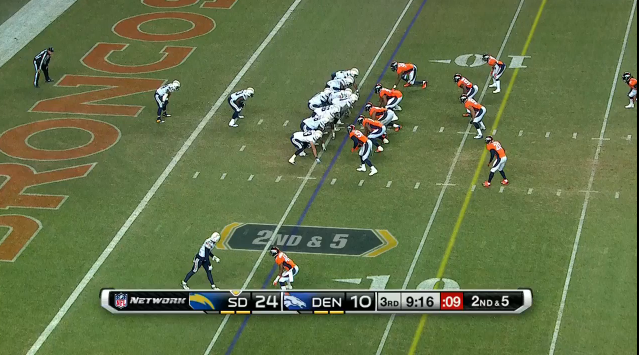 I felt like Rivers could have audibled to a stretch zone to the right here. 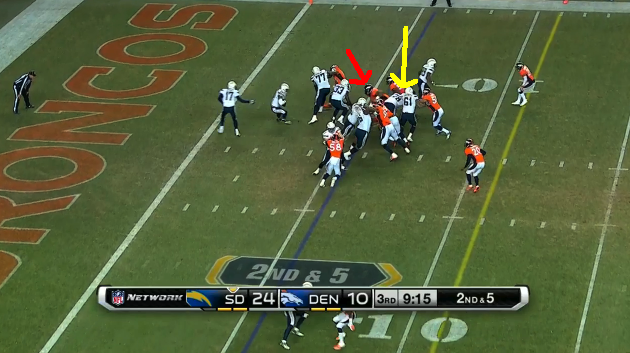 The yellow arrow is Rinehart. He dropped his head and the defender hit him with a really nice swim move. Once the play–side guard gets beat, the play has no chance. Mathews was lucky to get anything out of this play.

The Chargers come out in 11 personnel. Woodhead motions to make it an empty backfield. How far has this team come to have the confidence in the line to do this standing on their own goal line? 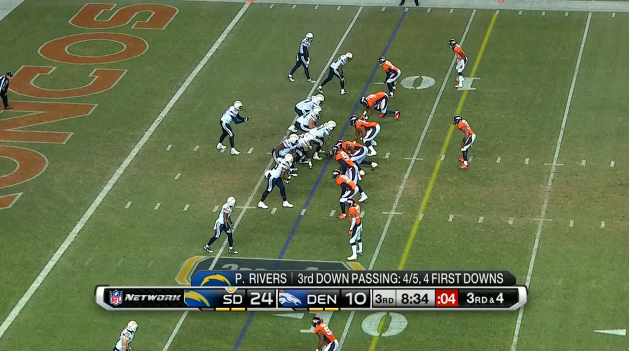 Here is the route combination 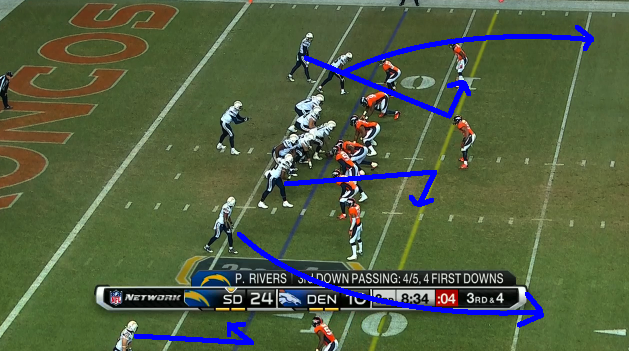 To the bottom of the screen, Woodhead takes 2 steps and stops, trying to create a big throwing lane for Rivers to hit Royal on a wheel route. I love the idea of taking a shot here, and the play design. 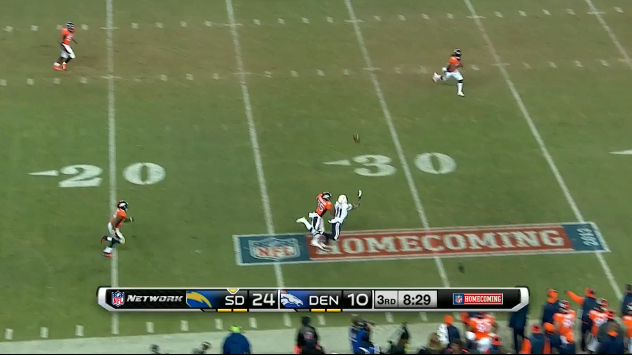 Rivers just over–throws Royal by about a step. He put it where only Royal could get it, so no real complaints here.

Chargers punt the ball, but get the ball back after Denver lined up in the Neutral Zone. 5 yard penalty gave San Diego the first down.

Mathews run to right tackle for no gain

Chargers come out in probably my favorite personnel and formation: 12, where they line the Tight Ends up on the same side. 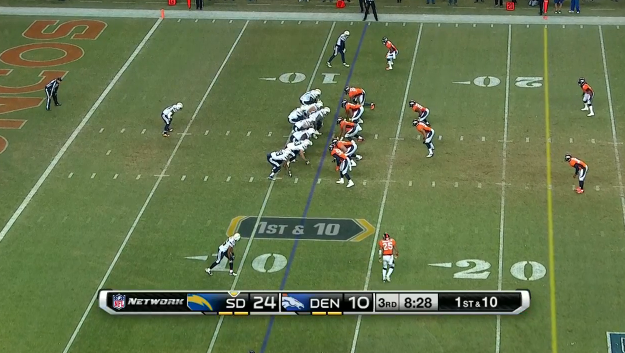 Unfortunately, Ladarius Green was tasked with blocking Von Miller, who drove him back right off the snap of the ball. Hardwick lets his man cross his face, and again, the play is blown up before it starts. 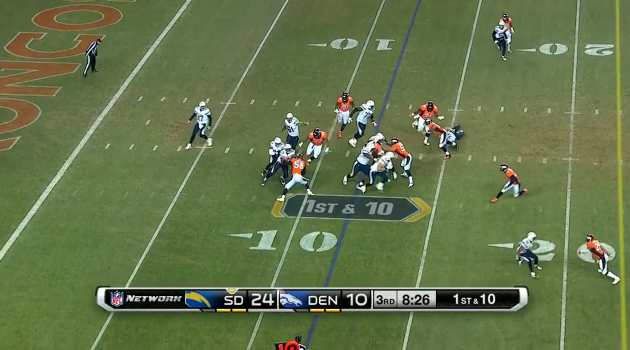 Chargers come out in 11 personnel again, this time with trips to the top of the screen, and Gates as an inline TE to the bottom. 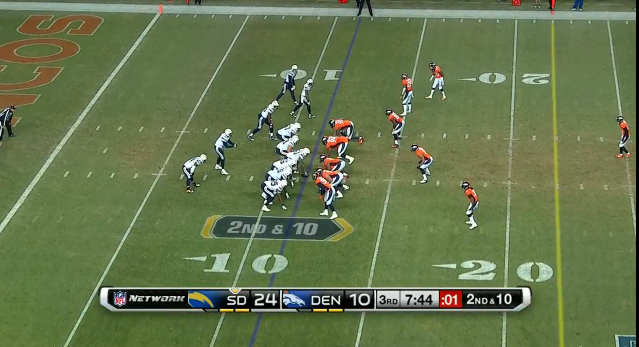 I'm a big fan of this play. They run a little counter play that stays on the same side of the formation, if Gates is able to hold Miller, it's Mathews 1-on-1 with the safety.

But because Von Miller is All-World, he beats Gates. This now forces Mathews to cut back, or make 2 guys miss. He makes something out of nothing and gains 4 yards on his own. 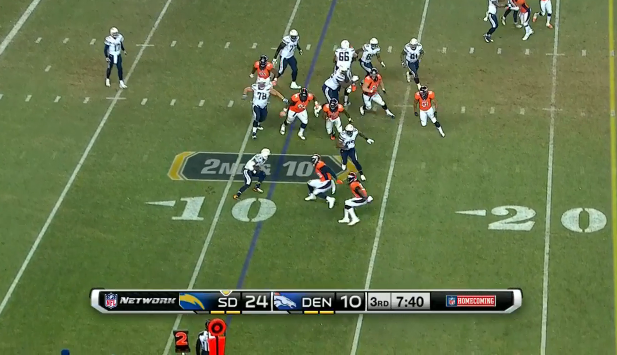 Rivers to Gates for a gain of 9

San Diego comes out in 11 personnel, with trips to the top of the screen, and Allen isolated to the bottom. 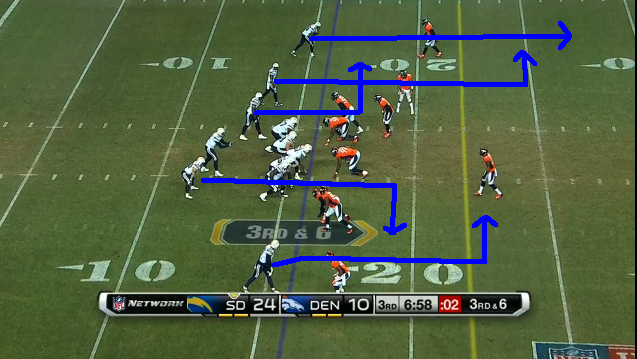 A simple levels route to the top of the screen, forcing the Broncos defender to chose either Royal or Gates.

Denver came with an overload blitz from the trips side, Rivers was able to recognize it quickly and realize no one was with Gates, first down. 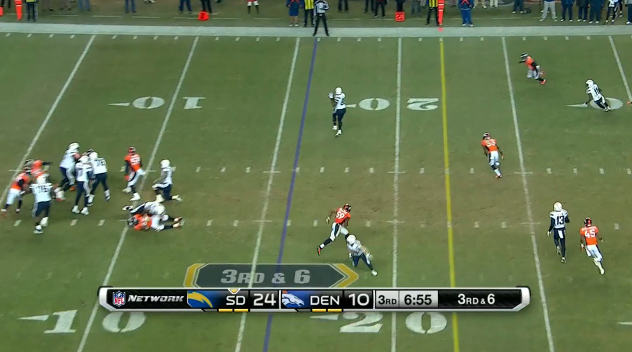 Woodhead run to left for loss of 4

This was very risky. You had better be sure that there were 12 men, or else you're out of challenges for the game and left with one timeout for the rest of the half. Luckily, things worked out in McCoy's favor.

Chargers come out in 12 personnel with 2 Tight Ends to the same side. 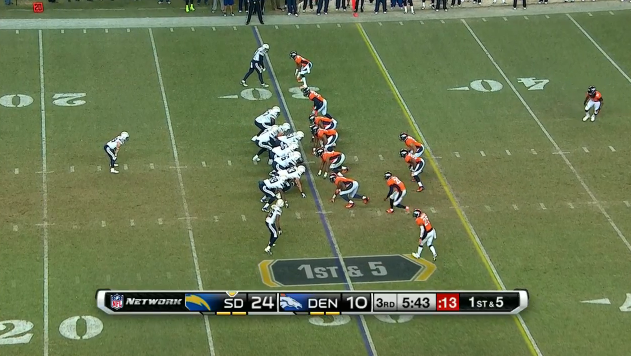 There was really nowhere to run here, but with Woodhead that usually doesn't matter, as he finds a way to get 4 to 5 yards because the defense can't locate him. 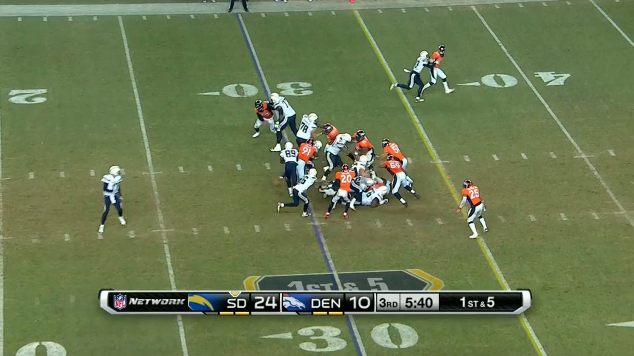 Before Woodhead can bob and weave through traffic, Green allows his man to cross his face, and he stops Woodhead before he can get going.

This was after Rinehart was injured. Mathews is also on the sideline being looked at. So Ronnie Brown is in the game. 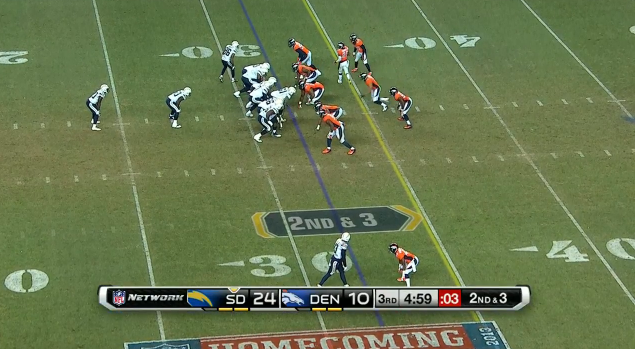 Brown is left for dead in the backfield, but he makes a fantastic cut and makes a man miss, and ends up gaining  6. Great play by Brown. 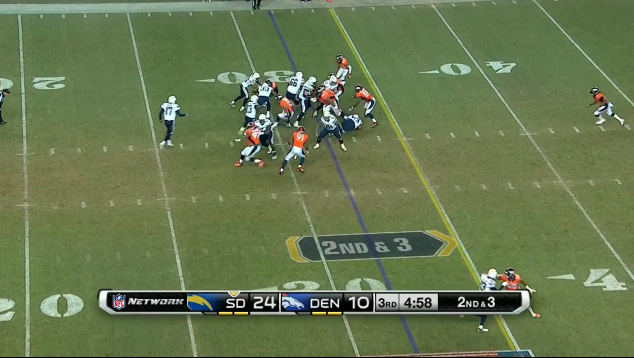 The play was a power to the left, the blitzing linebacker just replaced Clary, who was pulling on the play, there was really no way to account for the LB. Brown just made a fantastic play. Sometimes that's what you have to do.

Rivers complete to Royal for 20 yards

Rivers audibled to a screen once he saw the Broncos showing blitz. A year ago, Rivers doesn't have this flexibility. 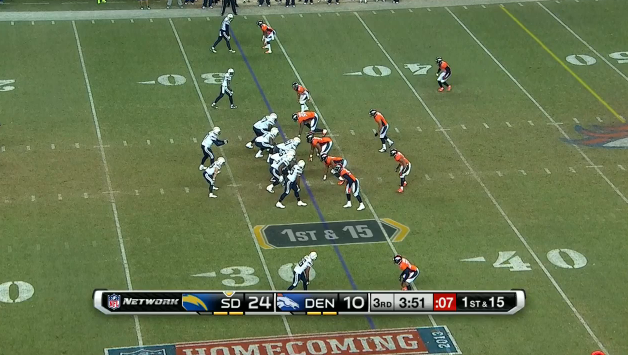 The slot CB showed blitz, as did the inside Linebacker on the right. 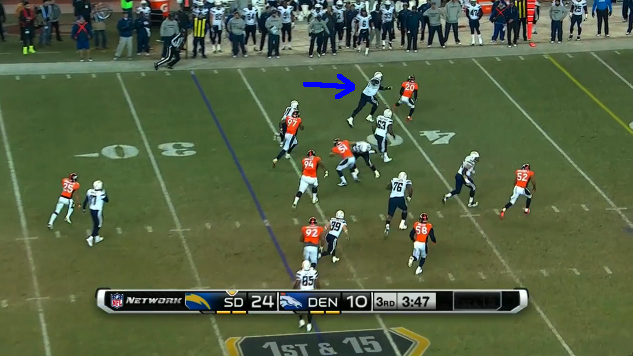 Eagles fans will tell you he's the worst. I watched King Dunlap play last year, he was solid. This year? He's been everything. Huge props to Joe D'Alessandris for getting every ounce of potential out of him. He wasn't moving like this last year. Dunlap looked like an 18 year–old big brother pushing his 6 year–old little brother around on this play.

Great check by Rivers, great execution by the line, and Royal did the rest.

11 personnel, out of Shotgun. 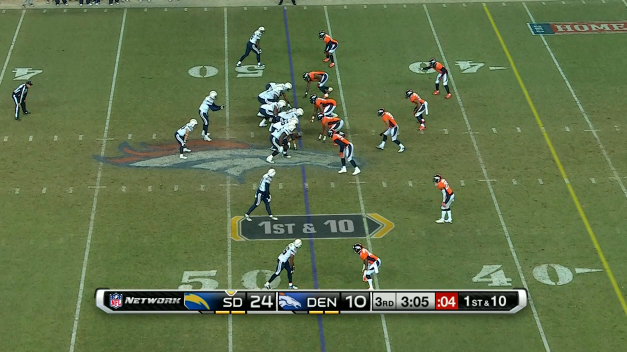 The line gets a very good push, and I feel like Woodhead missed an opportunity here to get more yards. He cut it back when I think he should've stayed play-side. Thought he had numbers, but his instincts took over and I can't fault him for that. 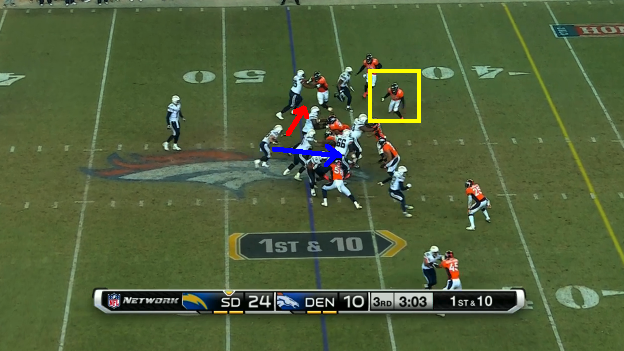 12 personnel, with Green in the slot. 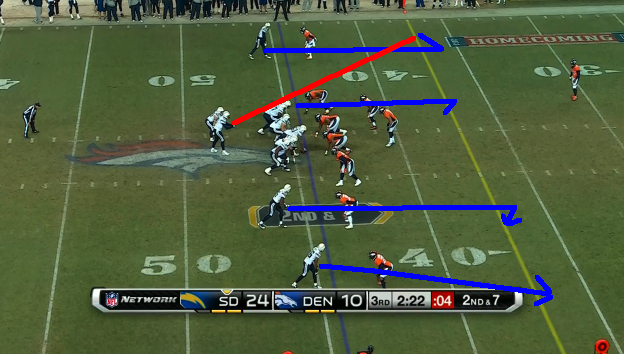 The ball was low and away, but Allen was in a hand fight with Rodgers-Cromartie, and slipped out of his break for an incomplete pass. 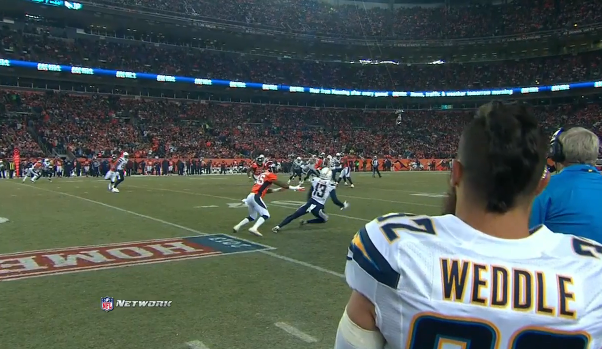 Rivers sacked for loss of 6 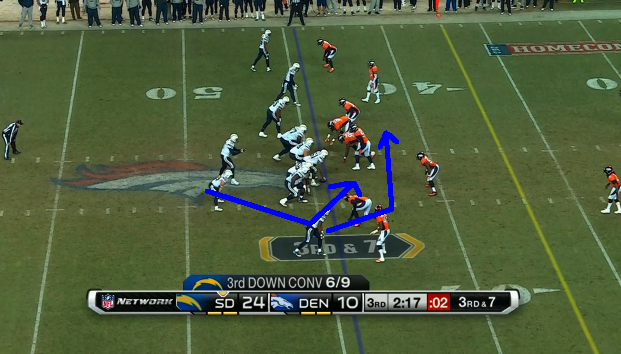 This was a one–man route the whole way. Green to the bottom of the screen cleared out, and Woodhead ran a "Texas/Angle" route.

I'm not sure if Rivers lost grip on the ball, or felt like he couldn't get it over the Broncos defender. 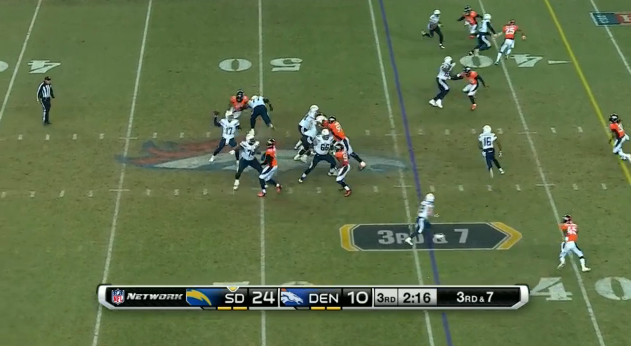 But he doesn't release the ball here, and eventually is sacked.

Even though the Chargers didn't get any points, they took over 8 minutes off the clock. At this point in the game the Broncos had the ball for just barely over 12 minutes. That's how you beat Peyton Manning, you play keep–away and score.

Easiest decision ever. Rivers sacked twice, the other sack was more of a coverage sack. He was pressured on 3 of his 23 drop backs. This OL is so good when they all play together. It's pretty obvious who deserves the game ball. 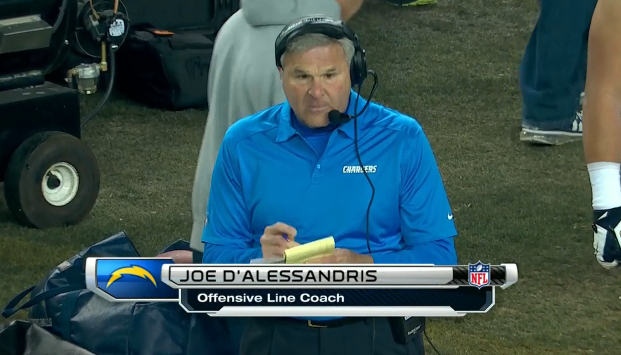