Share All sharing options for: How Zone Blocking is Improving the San Diego Chargers Run Game

Under Norv Turner, the San Diego Chargers run diversity was at a minimum. The Power, as we all know, was Norv Turner's bread-and-butter run play (Cam Cameron's also). A large chunk of what he was trying to accomplish on offense is based on the production of this very run play.

Yes, there were more runs. Every offensive mind possesses plays in their respective playbooks like a dive, an off tackle and a counter. As for Mike McCoy, his running concepts aren't so "vintage." He, not Whiz, has brought zone runs over from Denver, and they have been a joy to watch.

In this piece, I will break down each zone run McCoy has so you can get a better perspective of what you are watching on Sundays.

When you watch San Diego hurry to the line of scrimmage and see the running back offset to the right or left of the quarterback (2 yards back and 2 steps to the right or left), expect Inside Zone. During the year, when this play is run, almost every announcer has stated that it is a draw play. Totally incorrect.

The Draw Play calls for the offensive lineman to show pass and invite the upfield rush. The Draw calls for the quarterback, in some form, to show pass. The Draw insists the Running Back stall as if he's in pass protection. None of this happens on these Inside Zone run plays.

The Inside Zone was on display versus the Oakland Raiders: 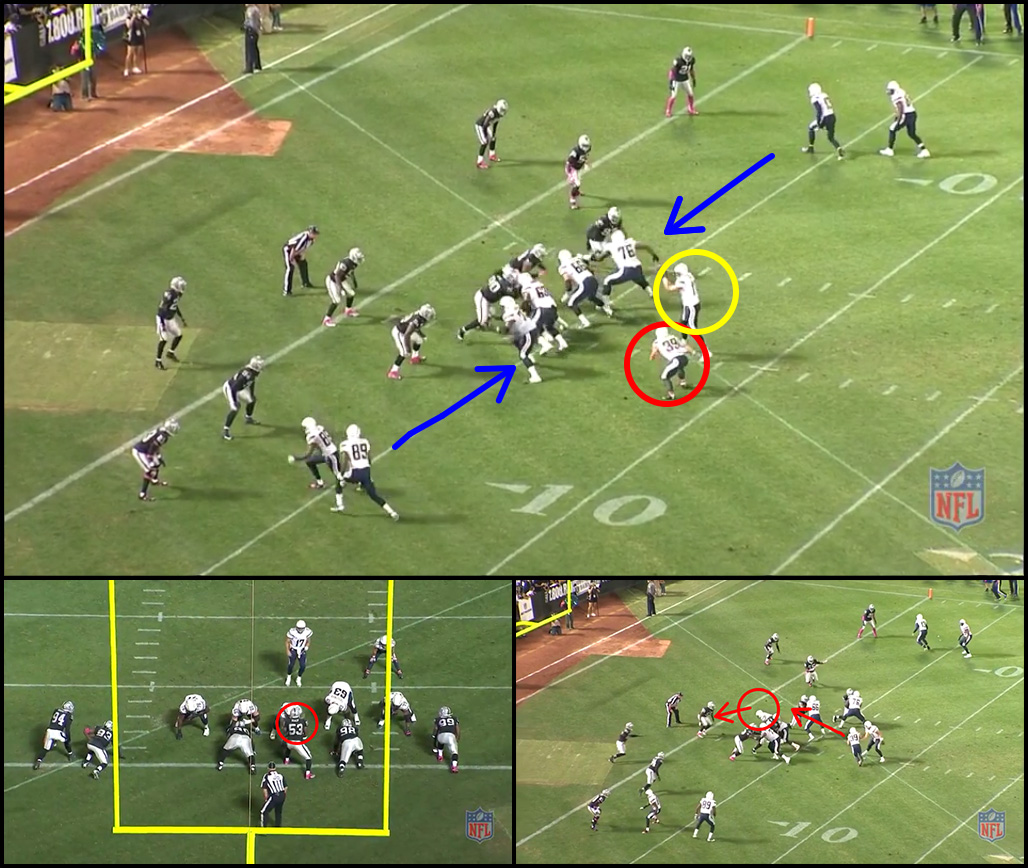 The first illustration has Philip never showing pass. All interior linemen are not inviting the rush. In fact, by the time Rivers has the snap, Nick Hardwick is already mid way through his "shoulder block" and continuing path to the Mike Backer (Bottom Right Illustration). Danny Woodhead never delays and hits the hole similarly to a Dive or Iso. This is not a draw. It's Inside Zone.

The picture positioned in the bottom left gives you an idea of how Oakland stopped San Diego on the goalline. Once Nick Roach "covered" Hardwick, the zone is cancelled and it becomes a man blocking. Oakland, of course, blew all of that up.

To summarize it, all A-Gap runs are not draws. Sending a "scat-back" to run in the A-Gap does not automatically make the play a draw.

One of my favorite run plays. Outside Zone does not mean "Zone Blocking to the Outside." In fact, the aiming point of the Outside Zone is between the Guard and the Tackle or the guards "Outside Butt Cheek"

A few years back, Chip Kelly had a presentation at the Nike Coach of the Year Clinic (his PowerPoint presentation was as quick as his offense is, no lie) where he primarily discussed his two zone concepts.

In his Outside Zone, the positioning of his running back is next to the QB, not offset. He instructs his running backs to take at least two running steps down the line before seeking a crease. This places the running back between the guard and tackle, which I stated earlier, NOT outside.

Mike McCoy used Outside Zone to get Ryan Mathews a touchdown in Jacksonville: 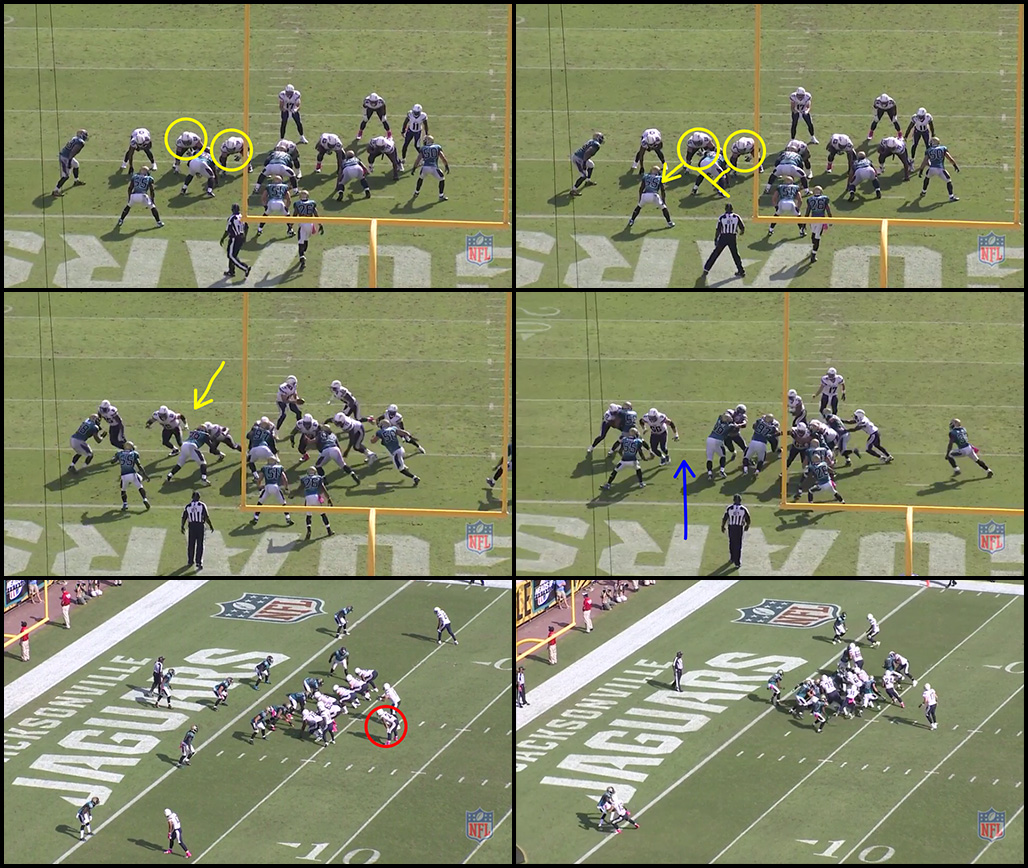 G.O.D. Blocking is on display here (Gap-On-Down). The top right picture shows you the blocking assignments for the play. The right guard checks his playside gap and knows his assignment. Jeromey Clary doesn't have a playside defensive player, so he checks "On". There is no one over him, so his next assignment is "Down", which you see illustrated in the top four pictures.

The Bottom right illustration gives you the backside action. There is no cut block. D.J. Fluker immediately gets lateral to his playside gap and Eddie Royal was motioned in to subdue the backside defender.

Did I mention how much I love his play?

What most think is Outside Zone, is actually the Zone Stretch. The difference you ask? The aiming point, interior lineman's shoulder positioning and backside tackle action.

The aiming point for the stretch is the playside tackle's outside number. With the stretch, you want your running back pressing the aiming point which forces the flowing linebackers to make a decision. Secondly, the running back must remain deep enough in his path to see the creases opening up. Basically, the Running Back's job is to get outside, but upfield at the same time. Whereas the sweep, for instance, calls for you to "race to sideline", then proceed.

Look no further than Houston and Washington if want to see this ran out of different sets. This is Shanahan's staple, and we all know who Kubiak worked under.

Mike McCoy brought this, too, over and again displayed it versus the Jacksonville Jaguars: 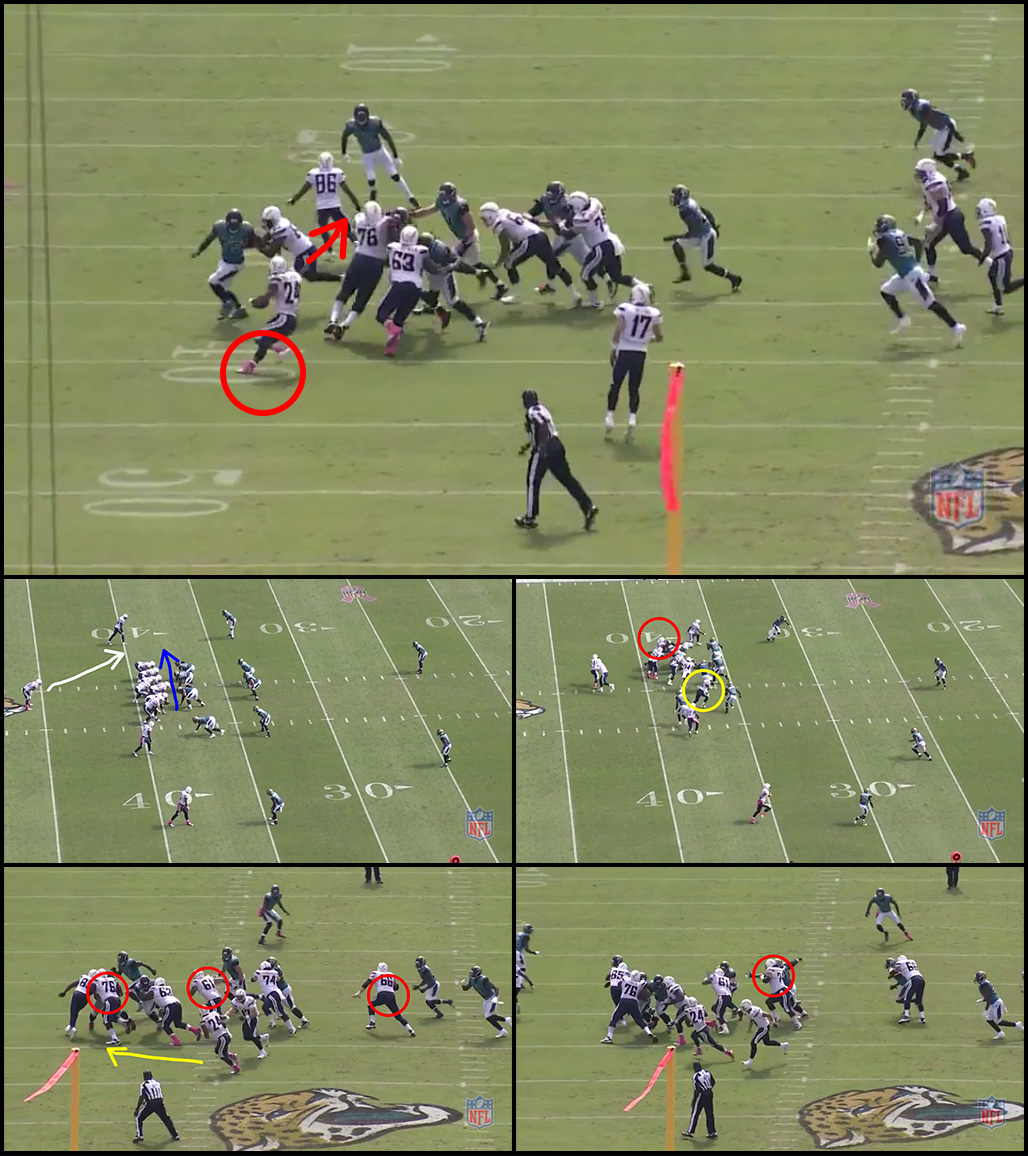 As I stated earlier, watching the backside tackle and watch the interior linemen action will tell all. Jacksonville's DE was in a Wide 9 alignment. Had the Jaguars deployed him closer, you would have seen a cut block from Clary (What you don't see on Outside Zone). His assignment, now, is to control the Will Backer. The Will is closer and is then designated as the backside threat.

You see Hardwick and his shoulders? Ok. You see Ohrnberger's (Bottom Right)? What about Troutman (Bottom Right)? All squaring to sideline, right? This is the interior lineman's shoulders I was referring to previously. This is the stretch. Ryan Mathews presses the hole but gets depth, causing the Mike to begin filling. Ryan properly allows the play develop and lo and behold finds the crease where? On the Tackles Outside Number.

You can now laugh with me when announcers get it wrong. Thank you for reading.