Washington takes the McCoy/Whisenhunt win template (i.e. control the ball, sustain drives, score TDs) and turns it against them. The result is that the Chargers find a way to lose a crucial game they had no business winning in the first place, and likely end up doing irreparable damage to their playoff chances.

Apparently, that's not the way it was going to go. Unfortunately, the Chargers will still be given grades, and some of them will be poor.

Philip Rivers posted some deceiving numbers. Rivers threw 29 completions on 46 attempts (63%) for 341 yards (7.41 YPA), 2 TDs and 2 INTs, but that doesn't begin to tell the whole story. First of all, neither of the INTs appeared to be Rivers' fault as both throws were on time and relatively accurate. Rivers also likely lost a 3rd TD pass on a dropped pass, and had another drive killed by a case of the drops. That said, Rivers also deserves some of the blame for the decisions made on the goal line late in the 4th quarter, with two questionable audible/option decisions with both 1st and 2nd and Goal and less than 1 yard to go. As a runner, Rivers scrambled twice for 14 yards after eluding a collapsing pocket.

Danny Woodhead: B plus

RB Danny Woodhead continues his Darren Sproles 2.0 imitation, by catching 9 passes for 77 yards (12 targets) and adding 21 yards rushing on 7 carries (3.0 YPA). He was possibly jobbed of a game-winning TD catch, which was balanced out by his getting away with a 4th quarter fumble.

RB Ryan Mathews was criminally underused in this game, especially at the end of regulation. Mathews had only 7 carries for 34 yards (4.9 YPA), in a game where the Chargers were within one score for all but 2:50 of game time and had a chance to win with 3 plays from the 1 foot line. His absence in this game counts him as a missing offensive weapon and an egregious coaching error. FB Le'Ron McClain and RB Ronnie Brown combined for 8 snaps, and were decent in blocking, but otherwise had no impact at all.

WR Keenan Allen turned in a gritty performance, rebounding from 1) a ridiculous OPI call, 2) a dropped dig route throw that could have gone for a TD, and 3) allowing CB David Amerson to undercut him for an INT, leading to a 4th quarter WSH FG. He was brilliant against Amerson late in the 2nd quarter, and again on the final two drives. For the game, he pulled in 8 catches on 11 targets for 128 yards, and a terrific double move go route which gave him the easiest TD he's likely to ever get.

WR Vincent Brown had a very poor game, against CB DeAngelo Hall, with only one catch on 6 targets for 17 yards, and his decision to run a corner instead of a post led to Rivers' first INT (by DB E.J. Biggers) and WSH's first TD drive. WR Eddie Royal had 4 catches for 67 yards on 6 targets, including a nice 21 yard TD on a WR screen pass. TE Antonio Gates finished with 6 catches for 53 yards on 10 targets, doing most of his damage over the middle against ILB Perry Riley. The second missing weapon from the offense, TE Ladarius Green, finished with 1 catch for 10 yards.

Offensive Line: B plus

A strong all-around performance from the Offensive Line in this game. To begin with, LT King Dunlap came back and played a strong game against OLB Brian Orakpo, largely taking him out of the game. LG Johnnie Troutman had another strong game both in pass and run blocking, this time largely matched against DE Stephen Bowen (I did see PFFs comments about Troutman - we'll have to agree to disagree). C Nick Hardwick was also largely solid against NT Barry Cofield. On the right side, RG Jeromey Clary had repeated issues handling DE/OLB Ryan Kerrigan, and occasionally Cofied, in pass protection, and also struggled to contain Kerrigan on running plays. On the outside, RT DJ Fluker was strong in both pass and run blocking against Kerrigan.

DE Corey Liuget had a truly Jekyll and Hyde game, meaning he was either awful or terrific, sometimes on back to back plays. When Liuget was strong, it was in instances were the WSH blocking scheme put him man-to-man against LG Kory Lichtensteiger. Otherwise, WSH simply allowed Liuget to run himself out of the play and went behind him. Beyond Liuget's schizophrenic performance, and outside of reserve DE Lawrence Guy's tipped pass which ended up in reserve DT Sean Lissemore's arms for a TD off INT, this unit was a train wreck. After a couple of decent games, Kendall Reyes was back to being a virtual no show against RG Chris Chester, and DT Cam Thomas was back to getting pushed around, this week by C Will Montgomery.

Really, all this group had working was a handful of nice plays to stop runs by OLB Jarret Johnson, and some hit and miss by ILB Andrew Gachkar. Gachkar had a few plays where he guessed right and shot the gap, and was at least not lost in shallow zone coverage, but still has issues shedding blockers and sometimes is limited by his lack of athleticism. ILB Manti Te'o made exactly one play of note, stopping QB Robert Griffin III on an option play. He seems completely lost in zone coverage, struggling to shed blockers, and also had a difficult time trying to locate the correct gap. The problem with Te'o at this level seems to be that his deficiencies have to be masked with a strong supporting cast - he's clearly not a game changing player. On the outside, OLB Larry English had a couple of nice tackles of Griffin as the pocket broke down, but failed to generate any real pressure against RT Tyler Polumbus.

Yes, this group was not helped by the lack of a pass rush, but this group did absolutely nothing on their own to mitigate the problems. Of the CBs, the best game probably came from Shareece Wright, who was at least not brutal in coverage and tackled decently. CB Derek Cox had a horrendous first half and first drive of the second half against WRs Pierre Garcon and Leonard Hankerson, and was mercifully benched by DC John Pagano for the remainder of the second half. Not that any one else was better, as Garcon amassed 172 yards receiving on 7 receptions against a combination of Cox, and CBs Richard Marshall and Johnny Patrick.

FS Eric Weddle was eaten alive in pass coverage early by TEs Jordan Reed and Logan Paulsen, allowing four 3rd down conversions. He finished with 14 total tackles, a sign of the dumpster fire in front of him. SS Marcus Gilchrist and S Jahleel Addae were consistently late providing help in the middle of the field. For me, the lone bright spot was the tackling of Darrell Stuckey.

Special Teams: A minus

This was truly the only unit which played plus football for the entire game. The Chargers would never have had a chance to steal this game late were it not for the 2 blocked FGs from Guy and Liuget. The Chargers also got a scintillating punting performance from Mike Scifres, who dropped 2 of his 4 punts inside the 5. One was downed at the WSH 1 yard line thanks to great kick coverage, and the other was a great coffin corner kick that went out of bounds at the WSH 1. PK Nick Novak converted his only FG attempt of 19 yards. and generated only one touchback on his 5 kickoffs.

I have no desire to rehash what the other writers have covered the last couple days. So, I'm going to go in a bit of a different direction. I'm aware that this is a very small sample size, but what's troubling is that Mike McCoy has not improved on Norv Turner's performance in a close game. In Turner's last three seasons, the Chargers had a record of 8-15 in games decided by 8 points or less.

Thus far, McCoy has fared 1-3 in games decided by 8 points or less, and the Chargers' opponents (Texans, Eagles, Titans, WSH) in those close games has a combined record of 13-20 - an average record of 6.3 wins (the Pythagorean Expected Average Wins for these teams is 6.55). Strong performance in close games was one the Chargers' best opportunities to get to the playoffs this season, and their failure to perform in close games against subpar opponents portends trouble for the next 8 weeks.

Also, through 8 games, the Chargers 4-4 record underachieves their current Pythagorean Expected Wins of 4.464, which projects out to 8.928 expected wins against 8 actual wins - a Turneresque underperformance of almost 1 full win. I think McCoy and the offensive staff have done a terrific job so far this season of redesigning the offense to make the most of the players they have on hand (Mathews and Green excepted), but it's clear to me that McCoy's game management skills need some serious reappraisal. 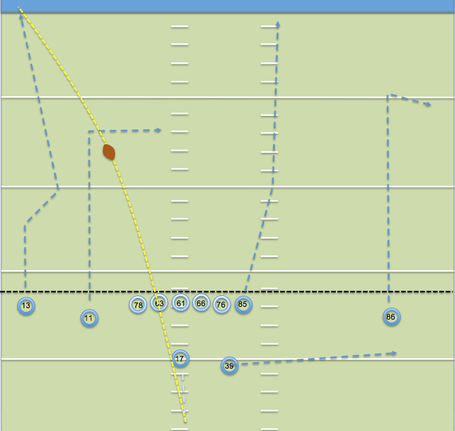 Seeing what fun Peyton Manning and the Denver Broncos will have against the Chargers defense with an extra week to prepare. I'm setting the over/under at 45 points, 400 passing yards, and 5 TDs.