San Diego Chargers Coaching: The Good, the Bad, and the Ugly

Reviewing the coaching by Mike McCoy, Ken Whisenhunt, John Pagano and the rest of the San Diego Chargers staff in the team's loss to the Washington Redskins.

Share All sharing options for: San Diego Chargers Coaching: The Good, the Bad, and the Ugly

You know that feeling when you're so pissed off, that you just laugh? I imagine that was how most of the San Diego Chargers' fans felt on Sunday. At least, those were my feelings watching everything unfold. It was the same old Charger team that we've seen over the course of the season, this time, all the bad was bunched into one game. There were a few good things, so let's start out with those.

During bye weeks, good teams implement plays, formations, and new wrinkles on their side of the ball. We saw that, on offense. Ken Whisenhunt added the pistol formation to the offense. That was refreshing. It was the first time we've seen that this year. I like the pistol because defenses have to honor both sides of the formation, unlike the infamous inside zone play that you all have come to hate. When Danny Woodhead is lined up offset from Philip Rivers, he can only run one direction. 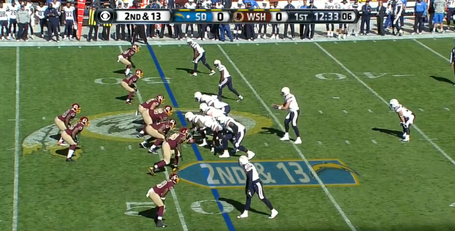 Out of the Pistol formation, you can still run your downhill running game, and you can audible to a run either left or right. Contrary to popular belief, the Pistol isn't just for teams with a read-option type quarterback. The Pistol has its advantages in that it helps your play-action game, your QB is 3 yards deeper (so he can scan the defense a little better), and it makes the defense honor so many different things.

More good from the offense, specifically in the passing game, is the way the targets were distributed. A couple weeks ago our fearless leader asked me if I honestly felt like Keenan Allen should be featured in the offense more than Antonio Gates. My answer? YES. I think the team should use Gates to stay ahead of the chains, and target him more on early downs, but I think it's clear that Allen should be the team's go-to receiver (yes I'm aware of the drop/interception this week, both of which are anomalies that have never happened this season).

Woodhead had 12 targets, Allen had 11, and Gates had 10. Eddie Royal and Vincent Brown each got 6 balls thrown their way as well. I'm perfectly fine with that distribution. I would even take some away from Woodhead/Gates for other tight end that's on the roster.

The irony in this game was that there was a point where the offense needed the defense to bail them out, and they did. There were three series in a row in the second half where the defense forced a punt, field goal (after an interception), and another punt. Those three stops kept the Chargers in the game. Those stops were huge.

Knowing you're going against an offense that will be very tough for your defense to stop, you run the ball. That's how you take away the other offense, by keeping them off the field. The time of possession was lopsided, Washington 40:03, San Diego 25:58. Why? It's pretty obvious. The lack of run game. I don't mind the quick hitting passes on first down. I do mind when Mathews doesn't see the field for an entire series. In 49 drop backs, the Chargers had just 16 rushing attempts. This is "How to lose a Game 101."

After Washington tied the game 14-14. The Chargers ran the ball three times in the second half. Three. You know who I blame for this? Mike McCoy.

He's the head coach, he has the authority override any play he hears signaled in. The work he did in 2010 with the Bronco's running game was nothing short of a miracle. I know he's capable, I just don't understand it.

On defense, for the crowd that loved to use "this defense is so good they haven't allowed a touchdown in 11 quarters", do you still feel the same? I don't get why people still continue to make excuses for defensive coordinator John Pagano. "He's making the most of a bad situation." How so? He has the same group as he did last year, and they're worse! They were bad last year, too.

It's become a habit now that Pagano isn't making someone besides the other teams best player beat him. That's coaching. That has nothing to do with the talent on the team. Washington has one wide receiver on the team that is competent. That wide receiver finished the game with 7 catches for 172 yards. That's coaching. It's not a surprise that Pierre Garcon was Robert Griffin III's go to target. Garcon has 83 targets on the season. The closest to him by another receiver is 50. That's coaching. Double Garcon, bracket him, do something! Just don't let him beat you. He did.

Defense first. The guessing games continue on defense. There was no real game plan, that was apparent. When I wrote about Washington's offense, it was clear they there was only a handful of plays they ran. The offense is incredibly simplified, and every throw for Griffin is to his first read. If that first read isn't there, Griffin has a tendency to panic. As far as the running game, it's stretch zone, zone read, and they will sprinkle in an outside zone here and there. Still, very basic.

This was ugly. Like I said, Pagano was guessing. No game plan, no homework done. There wasn't much to like outside of those three series in the second half I mentioned. This is why Washington had five drives that were 9 plays or more.

Before this game Griffin had been completing 58.4% of his passes. To get and idea of how bad that is, Geno Smith is completing 58%. That's bottom 5 QB bad. Teams have had a lot of success by taking away Griffin's first read. Griffin had 23 completions, 18 of those were off his first read. That's a problem. That's coaching.

As far as the running game, San Diego gave up 209 yards on an average of 5.2 yards per carry. This, too, was ugly. It might have been 300 had Corey Liuget not been able to shoot the gap on some of those stretch zone plays, or Jarret Johnson not been outstanding at setting the edge and making plays.

The team just wasn't prepared for what was coming. Not only were they not prepared, they didn't adjust. After Alfred Morris had just broken a 26 yard run, Washington brought in a heavy set with three tight ends. This is the first touchdown. 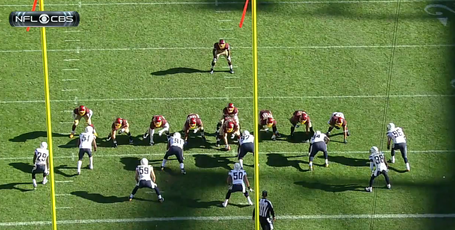 Washington runs right, it's 5-on-4 in favor of the offense, so yes, they scored.

While I agree with the initial idea to have the back side defensive end, who was Larry English, "spill" or to crash hard down the line of scrimmage to defend against the read-option, there was no linebacker there to replace him. It was usually Eric Weddle, of course, playing on the line of scrimmage where he has no business being. 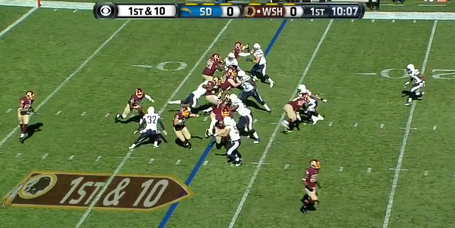 English did his job, he took the dive away. Weddle, who read this play pre-snap, was everywhere in the running game. He has no business being behind the line of scrimmage, and he still couldn't make up for the rest of the defense. When Washington ran the triple option, the Chargers were again unprepared.

On offense, I don't want to beat a dead horse, So you should read this to see how miserable the red zone series was to end the game. I will say, going into overtime, as soon as Washington won the coin toss, I knew it was over.

Instead, I'll go over McCoy's decision to punt the ball on the 35 yard line. This was directly after Washington drove 90 yards the previous drive. It was a terrible decision. Yes, it resulted into one of the more fluky touchdowns you'll ever see, but that doesn't justify the call.

I'll leave you with these next 2 tweets, which are direct results of bad coaching.

Per @ESPNStatsInfo the #Chargers have scored on 2-of-11 snaps from the 1-yard line this season (18%).