The San Diego Chargers drove 91 yards in the final minutes of regulation against the Washington Redskins, and had three chances to get the final yard and a road victory. Instead, coaches and players tripped over their mental mistakes on the way to a loss.

Share All sharing options for: Breaking down the San Diego Chargers goal line failure against the Washington Redskins

I couldn't help myself. I had to go back to the goal line series that could have, nay should have, won the game for the San Diego Chargers yesterday. I had to see what went wrong. Feel free to skip this post if you're not ready to relive the pain and agony just yet. 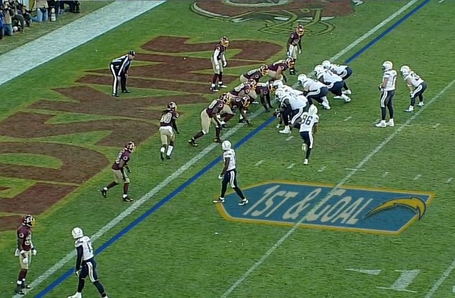 The first mistake here is on Mike McCoy. The second is on Philip Rivers.

This followed and lengthy review of the play, when the refs were trying to decide if Danny Woodhead touched the pylon before going out of bounds. They called it a touchdown on the field, watched it on video for a while, and then changed their minds.

There are 40 seconds in the play clock. The play clock starts when the refs finish reviewing the play. According to my iPhone's stopwatch, four minutes and twenty-two seconds elapsed between the ref signaling touchdown for Woodhead and the Chargers getting to the line of scrimmage. Why, then did the Chargers not get to the line of scrimmage until there were 15 seconds left in the playclock?

Rivers motioned Vincent Brown from the left side of the offense to the right side so that the defense would show either zone or man coverage. As you can see, the cornerback lined up against Brown goes with him, signaling man coverage. This should've been the moment where Rivers called an audible, but (with 9 seconds left in the playclock at this point) there probably wasn't enough time.

The man coverage tells Rivers that Keenan Allen, Eddie Royal and Vincent Brown will all be covered 1-on-1. The Washington Redskins are sending at least six guys (to match the Chargers' six blockers on the line of scrimmage), and the two linebackers/safeties are the wild card. They could be playing zone over the middle, they could be blitzing, one could be covering Woodhead and one could be blitzing...you get the idea.

Let's forget for a second that Danny Woodhead just landed on his head and spent the last four minutes and twenty-two seconds getting medical attention for what looks like a broken nose. The Chargers are choosing their six blockers against the eight defenders in the box for a running play, instead of taking advantage of any of the 1-on-1 situations they have with their WRs. 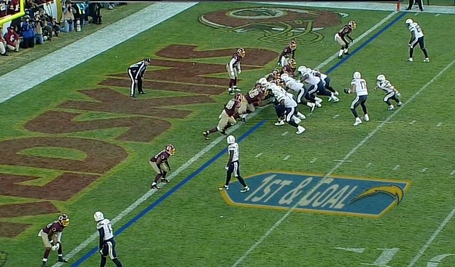 The ball is snapped. Six defenders take on six blockers, with two defenders waiting to see if it's a run or a pass. The wide receivers are statues. 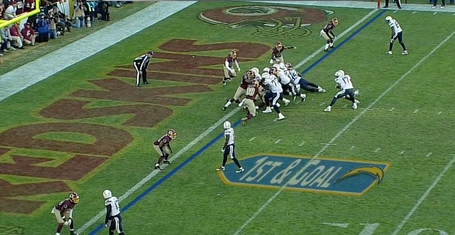 The ball is put in Woodhead's hands, and now the two extra defenders are running towards the play. Half of the offensive line is on the ground by now, including Antonio Gates (not exactly the team's best run-blocker). The wide receivers are....still statues. Way to sell the pass, fellas.

You know how this play worked out. Woodhead, who probably had a concussion at this point, ran head-first into a sea of Redskins defenders. As he was trying to push them backwards, those two linebackers/safeties were pushing the other side of the pile.

Nothing is gained here. This was a "trick" play. The Chargers did everything pre-play to show pass. It was obvious that a pass was coming. Any team would be nuts to run out of this formation. They took the Redskins cornerbacks (notoriously poor tacklers) out of the play, so that's something. Maybe the goal here was to get Brian Orakpo and Ryan Kerrian to run wide on a pass rush, and then have Woodhead try and beat the linebackers/safeties to the spot (vacated by Kerrigan) for the touchdown.

Running out of shotgun is always a bad idea. It's a worse idea when you don't pull an offensive lineman to be the lead blocker because you've eliminated the running back's momentum and given the defense a full second to push forward before the RB even has the ball. It's the worst idea when you're on the goal line and the defense doesn't have to play "over-the-top" defense to help the cornerbacks.

(NOTE: According to Mike McCoy's postgame press conference, this was a pass play that Rivers checked into a running play.)

This time the Chargers aren't screwing around. They have seven blockers on the line, a lead blocker in the form of fullback Le'Ron McClain and their power running back, Ryan Mathews, in the game. In addition, Antonio Gates has been replaced as a blocker on the right side of the line by tight end John Phillips.

This is power, power, power football. Ryan Mathews, who was carrying guys on his back for extra yards in the first quarter, is running behind McClain, D.J. Fluker, Jeromey Clary and John Phillips (the best run-blocking TE on the roster). He already has his eyes on the blocking in front of him, picking which hole he's going to hit. This is easy money. Get the score, break up the Redskins' Hail Mary attempt, and have a happy flight back to California.

EXCEPT, what was that hand-motion Rivers made at Gates right before the play? It's probably nothing to worry about. 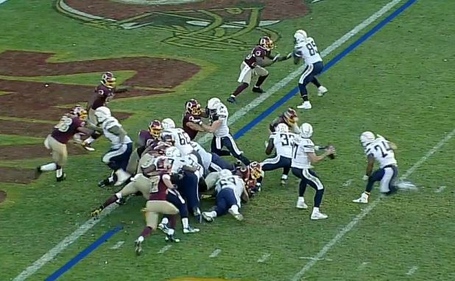 The offensive line pushes forward with solid run blocking. Nick Hardwick is already on the second level, taking out linebackers. Le'Ron McClain has taken on the blitzing safety, opening up a hole for Mathews to hit off of Phillips' right shoulder. Phillips has turned his guy inside, knowing that the run is going to the outside.

Mathews is....GETTING OUT OF THE WAY! He stops looking at the line long enough to see that Rivers has set his feet and is throwing the ball. He has to juke his way away from Rivers and looks for someone to block, except there is nobody. He ends up helping Le'Ron McClain double-team the blitzing safety, who McClain easily had under control already.

The ball is in the air. Everyone is looking at it, except for Nick Hardwick (who has blown through the second level and thinking that the Chargers just won the game) and Ryan Mathews (who is wondering what the hell just happened). Hardwick is looking for Mathews to blow through the line, Mathews is looking at Rivers to see if maybe he needs a check-down receiver, and John Phillips is wondering why the guy next to him is jumping in the air to try and knock down a pass. 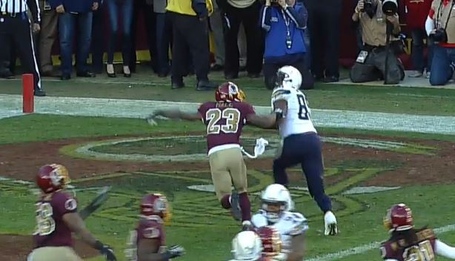 Another view of Mathews, looking back at Rivers, with the ball in the air. Also, some evidence here of Gates being held, which he spent the entire postgame media session complaining about.

This certainly looked like a power running play that Rivers, seeing Gates 1-on-1 with the smallish DeAngelo Hall, audibled out of. Former Chargers QB Kevin O'Connell saw the same thing:

I know its easy to blame coaches, but they called Goaline Run on 2nd down. QB made the decision a 1on1 fade to Gates was a better option

" @ChasingSunsets7 Check that. Rivers says he audibled on 1st down because he didn't like what he saw...ran play that was called on 2nd/3rd

Through two plays so far, Ken Whisenhunt has called pass that has been checked to a run and called a pass out of a run formation. That sounds like a good plan, and Norv Turner certainly would've liked it, but the problem is that "run personnel" and "run formations" exist and are feared for a reason (same with "pass personnel" and "pass formations"). They do what they do well, and they don't do the other thing so well.

What the Chargers did was try and play hockey with a soccer team. Then, when that didn't work, they got a soccer team on the field and tried playing basketball. This was Whisenhunt and Rivers believing in their trickery more than the actual skills of the player on the field. This was the opposite of Mike McCoy's repeated speeches about playing to the strengths of the roster. This goal line series makes Fluker's draft pick, Le'Ron McClain's roster spot and the Jeromey-Clary-Right-Guard experiment seem pointless. 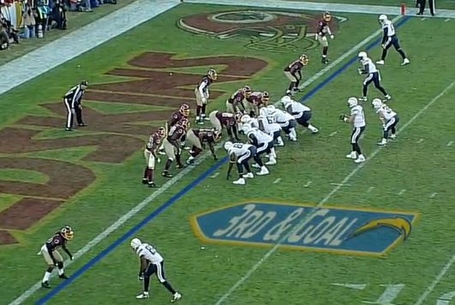 Back to the passing formation and personnel. With eight guys on the line and only six blockers, Rivers isn't checking this one to a run.

The good news is that the Chargers' passing game is really good. Also, Vincent Brown has been left 1-on-1 at the bottom, and there's no real way that the Redskins could cover both Gates and Woodhead with more than one guy unless they played the softest zone in the history of the NFL (which isn't happening at the goal line).

I don't like it better than power football, but this should work. Philip Rivers is in shotgun, so he'll have time, and he has five very talented receivers going up against the 5 or 6 Redskins defenders that aren't playing the run on the line. Someone will get open.

Danny Woodhead and Antonio Gates block. Vincent Brown, a good 20-yards away from the play, is getting jammed at the line of scrimmage. Gates, a terrible blocker, has pretty much let his guy through already. Rivers, a terrible runner, has taken off running because that's the way the play is drawn up.

There are two ways this play works. One, (injured) Eddie Royal leaves his defender grasping at air and then meets the ball at the pylon. Two, Keenan Allen beats his man on a long-developing play and the ball gets to the back corner of the end zone before the safety realizes.. Since Gates' guy is already passed him, let's assume option number two is already dead.

Woodhead is standing around with nobody to block. Gates is reading the back of the jersey of the guy he's supposed to be blocking (It says "ORAKPO"). Somewhere in northern Virginia, Vincent Brown is still being jammed at the line of scrimmage.

Eddie Royal can't beat his guy, leaving Allen in the back of the end zone as Rivers' only option. The throw isn't perfect, coming out a second earlier than planned. Royal's man leaves him to make the window even smaller, and the Chargers have lost the game. 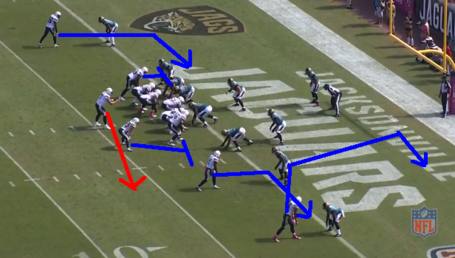 Oh, that's right, the Chargers ran this same play against the Jaguars two weeks ago. It didn't worth then either (Rivers ended up throwing the ball away). It's also the only play in the Chargers' "goal line playbook" that involves Rivers rolling out of the pocket. It's almost as if the Redskins had some sort of "tape" of that game that they could watch, so that they knew how to defend this play when it happened against them on the most crucial play of the game.

This play call, in fact all of the Charger's goal line plays this season that don't involve "Mathews up the middle" should be burned. Start over. When the team is running out of a passing formation, passing out of a running formation, and then making their waddling quarterback throw on the run to a receiver that hasn't practiced in three weeks because he's too injured, it might be time for the team to rethink its strategy down at the goal line.