Ladarius Green showcased why so many are excited about him being the heir apparent to Antonio Gates on his 60-yard touchdown against the Kansas City Chiefs last Sunday.

A contingent of Chargers fans haven't been shy about calling for Ladarius Green to be a much bigger part of the Chargers offense in 2013. With a healthy 20-plus yards per reception average coming into the game on Sunday, the argument was already a pretty strong one. It also didn't take a rocket scientist to know that Green's ability to stretch the field was going to get him into the end zone, most likely in explosive fashion, sooner rather than later. An event that would only cause the pro-Green supporters to grow more fervent and maybe force the coaching staff to finally listen.

San Diego was down 27-31 with nine minutes left in fourth quarter after the Chiefs converted a 25-yard field goal. Without a defense that can be relied upon to get the ball back in crunch time, the offense needed to find a way to turn the drive into a touchdown. After a short run by Ronnie Brown and a 7-yard catch by Antonio Gates, the Chargers were faced with a crucial 3rd-and-2 in their own territory. 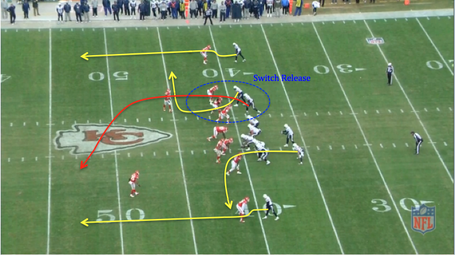 Given the down and distance and the design, I'm pretty sure Gates was the first option on this play. The switch release, with Green crossing in front of him immediately after the snap, is one way to keep defenders from jamming a receiver at the line, a strategy the Chiefs have deployed in recent years to take Gates away. Although it was effective in allowing him a free release off the line, it wasn't enough because the Chiefs deployed yet another anti-Gates strategy: bracket coverage. 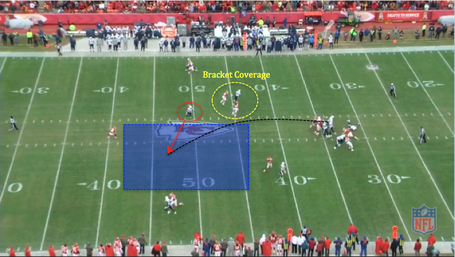 Bracket coverage is basically just a double team. One defender plays the outside while the other plays the inside, creating a situation where the defense no longer has to wonder whether it's an in- or out-breaking route. They're ready and in perfect position for both. It's an effective strategy to hold a very good tight end or slot receiver in check, but it has a weakness. It's not difficult to figure out - just do the math! With a four-man rush, the bracket on Gates and a safety over the top, the Chiefs have no choice but to play man coverage everywhere else, putting the secondary under enormous stress and increasing the likelihood of the offense breaking off a big play.

Here, Green gets a step on Brandon Flowers out of his break and heads to the open space, where Rivers hits him in stride right in front of safety Quintin Demps. Both Sean Smith and Demps underestimate his speed and take horrible angles, allowing Green all the crease he needed to outrun them to the end zone. That's a tight end outrunning three defensive backs, by the way. Speed is nice, folks. 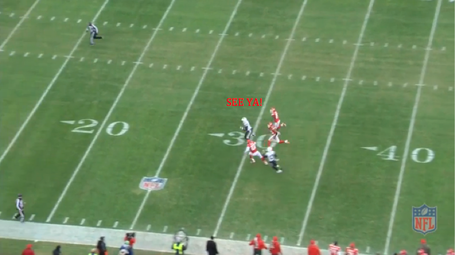 Green is only just starting to scratch the surface of his potential. He'll surely be an impact player in the future, but that future should start right now. There's no reason to let him marinate any longer. He's a mismatch with game-changing ability, a weapon that should be on the field for way more than 20-percent of his team's offensive snaps.

Hopefully that's the next thing we finally see happen in San Diego.