Just as it appeared Alex Smith had pulled the plug on the Chargers' 2013 season, and yet another season was buried in the Arrowhead Stadium turf, vintage El Capitan steals a victory from the playoff bound Kansas City Chiefs, with lots of help from an emerging young core of offensive players.

Games like this are the reason I'll never be able to quit Philip Rivers, and Sunday's performance ranks as one of his all-time great games. Rivers completed 27 of his 39 pass attempts (69.2%) for 392 yards (10.05 YPA) with 3 TDs and no turnovers. First, the (admittedly) nitpicking: Rivers overthrew WR Keenan Allen for a TD in the first quarter, almost had an INT on a high throw to TE Antonio Gates and held the ball too long and was sacked by Chiefs' S Eric Berry on the final drive.

Now, to the awesome: Rivers was repeatedly terrific in putting the ball on his receivers' hands (especially with Allen and the TD to TE Ladarius Green), giving them the chance to do damage after the catch. On several occasions, he showed good pocket awareness and stepped away from incoming pressure. Recognizing that the Chiefs were intent on taking Gates away, Rivers wisely turned the offense into "The Keenan Allen Show" (more below) instead of forcing the ball. Lastly, with the game (and quite likely the 2013 season) on the line, the winning TD pass to WR Seyi Ajirotutu could not have been better placed had Rivers handed the ball to him.

Running Backs: B plus

Before his hamstring injury, RB Ryan Mathews had gained 55 yards on 14 carries, for a modest 3.9 YPC. His totals also included a rushing TD from the 1 yard line, and unfortunately his 2nd fumble of the season (which he recovered). He also gained 10 yards on 2 catches (2 targets), and didn't have any mistakes in pass protection. His replacement, RB Ronnie Brown, was serviceable with 23 yards on 6 carries (3.8 YPC), but was very good in pass protection. His 1 reception (1 target) was good for -1 yard.

RB Danny Woodhead had a very strong all-around game, with 25 yards on 6 carries (4.2 YPC), and 1 rushing TD. Woodhead was also strong in pass protection, but was terrific in the passing game, with 45 yards on 4 catches (4 targets), which included an 11 yard TD pass, and 2 critical receptions on the final possession for 33 yards - both of which demonstrated terrific situational awareness of when to go for extra yards and when to get out of bounds.

WR Keenan Allen continues to play like the draft day steal he is, and absolutely murdered the Chiefs in the 1st half. Allen finished with 9 catches for 124 yards (12 targets), and could have had a bigger game had Rivers not missed him for an early TD. Among his receptions was an outstanding one-handed catch which resulted in a 16 yard gain and helped set up the Woodhead TD catch. WR Seyi Ajirotutu made the most of his limited opportunity, making the game-winning 26 yard TD catch against CB Sean Smith. WR Eddie Royal also made much of his 4 targets, with 4 receptions for 87 yards (and a long catch and run of 51 yards to set up the Mathews TD run. WR Vincent Brown was the only WR targeted who did not make a catch - he was targeted once, and slipped on the play.

Among the TEs, we finally got the Ladarius Green breakout game, with 3 receptions for 80 yards and a TD (5 targets), including a 60 yard TD catch and run. He also had a 35 yard catch and run wiped out on a terrible penalty call. His only mistake nearly led to an INT for S Quintin Demps, as he allowed Demps to undercut him on a pass that should have gone for a TD catch. TE Antonio Gates was the focal point of the Chiefs defense, and only managed 21 yards on 3 receptions (8 targets - though at least 2 were poor throws by Rivers).  TE John Phillips was targeted 1 time and went without a catch, but did have a penalty for a false start.

Given the circumstances, this was a great gritty performance by the offensive line. Playing at LT, DJ Fluker struggled early with DE Tamba Hali, although he did just enough to prevent a sack. Actually the worst play Fluker gave up was to reserve DE Frank Zombo, who nearly sacked Rivers to help kill a 2nd quarter possession in Chiefs territory. After that play though, Fluker was very solid - mostly against OLB Dezman Moses. LG Johnnie Troutman was serviceable in pass protection against DE Allen Bailey, but was generally better in the running game, although the Chiefs defensive speed gave him some problems on pulling plays.

In the middle, C Nick Hardwick and RG Chad Rinehart battled DT Dontari Poe to a virtual draw. Poe had a couple of pressures, but his biggest effect was in freeing up the Chiefs' linebackers to make plays in the running game. The best overall game came from RT Jeromey Clary, who is the personal Kryptonite of OLB Justin Houston. Houston had little to no effect in the passing game when he was on the field, and his replacement (DE Frank Zombo) was largely invisible.

DE Corey Liuget had a little bit of a bounce back game after last week's disaster in Miami, but he had limited impact as the Chiefs generally ran away from him most of the game. The Chiefs also rolled QB Alex Smith to the right, limiting Liuget's ability to make plays. But Corey had one awesome hustle play to tackle RB Jamaal Charles at the end of a 46 yard gain, and helping to save a TD.

DT Cam Thomas had another tough game, as he struggled against C Rodney Hudson. DE Kendall Reyes was beaten often in the running game by RG Geoff Schwartz, but did manage to draw a crucial 4th quarter holding call against C Rodney Hudson, and came up with the game-sealing sack on Smith. In limited duty, reserve DLs Sean Lissemore and Lawrence Guy managed a couple of pressures between them, but also struggled to hold the point in the running game.

The best game from this group came from ILB Donald Butler, who finished with 7 tackles and a nice pass defense on a blitz. Butler generally seemed to have the best combination of attacking the correct gap and making the tackle. ILB Reggie Walker was not really tested in pass coverage and collected an early sack, although he missed more than a few tackles in the backfield.

ILB Manti Te'o is getting marginally better each week at recognizing plays and getting downhill, but he was physically exposed several times by RB Jamaal Charles, with both power and speed (in fairness, very few ILBs can hang with Charles in terms of athleticism) - through he did have 2 tackles for loss. On the outside, OLB Thomas Keiser finished with a nice sack off an early stunt with Liuget, but was otherwise kept in check by Chiefs LT Branden Albert. On the other side, OLB Tourek Williams was mostly neutralized by RT Donald Stephenson.

Yes, I get that Derek Cox was bad again. Cox got burned by WR Donnie Avery for a 36 yard gain, which set up a Chiefs TD and Cox's next appointment with the San Diego bench.  What I'd like to know is what precisely he does wrong that gets him benched that CBs Shareece Wright and Richard Marshall don't do just as poorly? Wright was flagged twice for pass interference, Marshall once, and were otherwise killed in coverage by both Dwyane Bowe as well as WR Dexter McCluster. The biggest plus play was Wright batting the ball in the air which turned into the INT by Marcus Gilchrist.

FS Eric Weddle really had no impact on the game and seemed to be a step late for most of the game, though he did finish with 5 tackles. The 1st TD pass to Avery was more the fault of S Jahleel Addae, who followed WR Dwayne Bowe into the middle for a nice triple team - but left Cox hanging out to dry. Addae was also very late on a couple of zone pickups, and missed some tackles to boot. SS Marcus Gilchrist made a few nice tackles in run support, and managed to hold on to a tip-drill INT, but was otherwise terrible in coverage against TE Anthony Fasano, allowing one of the most ridiculously easy goal-line TD catches I've ever seen, as well as  committing pass interference in the end zone.

@BFTB_Chargers Seriously, what are they doing and why are they continuing to do it? Worst D in league by FO numbers, so not b/c it's working

PK Nick Novak converted his 2 FG opportunities from 30 yards away. Unfortunately for Novak, none of his kickoffs resulted in touchbacks. Worse, the Chargers' special teams weren't as good in coverage as they have been the last several weeks, with KR Quintin Demps averaging 24.9 yards on 8 returns, with a long of 38 yards - Novak made three tackles on kickoff returns, in fact. PR Dexter McCluster had a small average of 8.5 yards per return, but one went for 19 yards and helped set up a Chiefs scoring drive. P Mike Scifres had a 40 yard average over 5 punts, and did manage one punt downed inside the 20. PR Keenan Allen managed only 1 return for 5 yards, while KR Danny Woodhead managed 27.4 yards per kickoff return, one of which went for 37 yards.

Head Coach Mike McCoy had a split decision on his 4th down calls this week. He was absolutely correct to go for it with 4th and inches from the KC 40 in the 2nd quarter, though he passed on attempting a long FG  later in the possession when there was little downside to the attempt. He also was not aggressive in one situation where he was justified in going for it - the 4th and 2 at the KC 12 in the 1st quarter. He also chose a low reward opportunity for his first and only challenge, the loss of which left him with one challenge for the remainder (52+ minutes) of challenge-eligible time. I did like that McCoy stayed with Mathews after his fumble, and continued to give him short yardage and goal line carries.

Offensive Coordinator Ken Whisenhunt may have had his best game of the season. He did a sensational job of getting both Keenan Allen and Ladarius Green involved, and wisely stayed away from Gates while he was the focal point of the Chiefs' defense. He also did a nice job of repeatedly attacking the Chiefs' defense with crossing routes. My biggest gripe with Whiz off this game was using Mathews on inside zone from the shotgun, instead of giving Mathews more power and pistol formations, which take better advantage of his ability to get a head of steam.

Defensive Coordinator John Pagano had the right idea early, by attacking Alex Smith up the middle and taking away his initial read. As has been the case previously this season, Pagano goes away from something that's working before his opponent is forced to figure it out for themselves. I also generally agreed with the idea that Smith should be forced to beat the defense deep - except the secondary didn't hold up for more than half of 1 quarter. 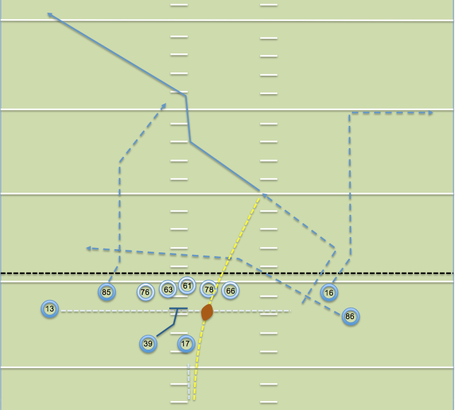 Don't forget, today is the 35th Annual Chargers Blood Drive, held at the Town and Country Convention Center in Mission Valley from 10 AM to 6 PM. It's a great event - please come down and donate if you have the time.

The future. Really, I'm not convinced this win was the spark to a postseason run in 2013. But Sunday's game was a window to a potentially awesome future. What I am looking forward to is watching Rivers adding years on the 2nd half of his career by playing with this core of young offensive talent.

And if they can keep themselves alive for another week with a win over the Cincinnati Bengals, so much the better.