Do you remember when I wrote about Vincent Brown and how he was playing out of position? That was due to my previous experience of playing wide receiver. Well, I also played defensive back all throughout high school and into the training camp of college for about four practices (I wasn't physical enough). Anyways, my experience definitely made me appreciate how difficult it is to play the position.

You have three seconds to run stride for stride with the receiver, read his eyes/hands to know when to look for the ball. Then you break on the ball and knock it down if it's thrown your way, and if you don't do that, you tackle the receiver.

There's a reason it's one of the four most valuable positions in the NFL.

Football is 90% mental, 10% physical. Everyone is a freak athlete at the NFL level. You just have to prepare better than your competition.

Let's go through the steps of what it takes to be a great corner, and figure out what is wrong with Derek Cox.

This has nothing to do with physical attributes; that's why it's so frustrating: it's all mental. It comes off as though these guys aren't in the film room enough because we are seeing the same mistakes week in and week out.

From knowing the opposing receivers' splits to what their patented route is on each down, every subtle advantage you can find will go a long way in helping you throughout the game. The receiver is already at an advantage because he knows where he's running. The more you know an opposing team's tendencies, and the more you use the down and distance to your advantage, the more you diminish the advantage of the offense.

This first example is poor route recognition. You need to know who you're guarding, the scenario, and what the offense is trying to do.

Cox is matched up against Brian Hartline. Hartline ran 42 routes in this game, only one of which was deep. For the season, he has only run eight deep routes. 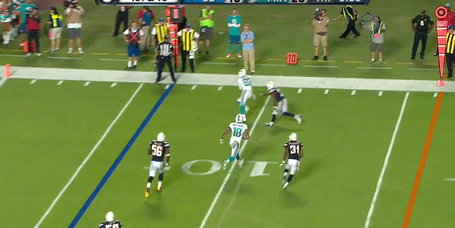 Instead of sitting on the route, Cox allows separation for a catch, and compounds his mistake with a missed tackle.

This has happened quite a bit this year.

In this next example. It's near the end of the half, and Cox is in "2-man" coverage, where he is in man coverage with safety help over the top. 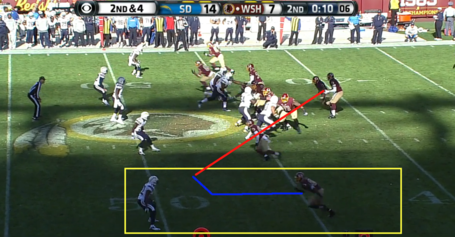 Given that the receiver is 2 yards on top of the numbers, and factoring in the time as well as the ball placement on the opposite hash, Cox should know only a slant or a go route can be run here. 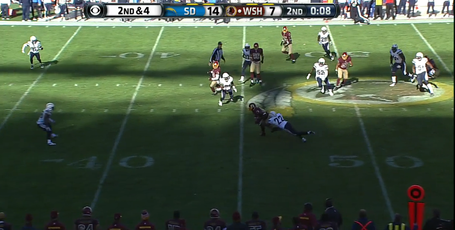 Instead of sitting on the route, Cox takes a few false steps and gives up the 13 yard slant.

More of the same problems occurred against the Chiefs.

He should have had help, yes. But Cox also needs to realize there is no other threat to his side, and should always stay on top of the route.

Route recognition might be Derek Cox's weakest trait. This can all be improved by spending hours upon hours in the film room.

You're going to get beat in the NFL. That's just a fact. The better corners have the ability to make up the maximum amount of ground when they are beaten. Some even do this to bait the QB into throwing towards them, to make it seem like the receiver is open, when indeed they are not. 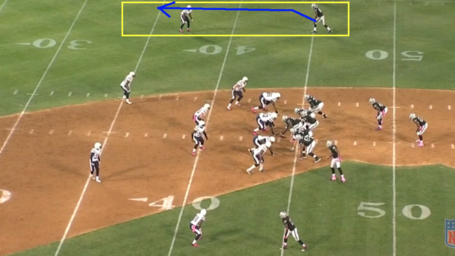 The WR continues to run by him for a 44 yard TD.

There's a reason Cox only has four passes defended this year, and has given up three touchdowns. His recovery speed just isn't there. Again, it's not all physical. The greatest example I can think of is Richard Sherman (4.54 40) who has great recovery speed.

Getting Your Head Around

This is a pet peeve for many fans. The DBs simply aren't getting their heads around to find the ball. Because Cox has been beaten so badly this year, if he would have just gotten his head around to find the ball, he would've broken the pass up on several occasions. This has been an issue since the first preseason game against Seattle.

Here, Cox gets flagged for defensive pass interference, when he could have easily turned his head, and possibly come away with the interception.

This is another area that is holding Cox back. It's not a physical flaw. It's just a technique issue that somehow hasn't been addressed yet.

What made Deion Sanders great wasn't just his ridiculous speed and coverage ability, it was the fact that as soon as the ball was in the air, he turned into a receiver. Whether he had to high point the ball to make a contested catch, or break on an out route and secure a catch going out of bounds, it's what made him the GOAT.

Cox simply doesn't possess this trait. This is all hand-eye coordination, and most importantly, concentration.

Earlier in the season we saw Cox jump for an interception and catch it with his chest. That should tell you all you need to know about his ball skills.

Against the Dolphins, he cost himself a touchdown.

If you go outside right now and have someone throw you a ball, put your hands together like this, watch the ball all the way into your hands, and I promise, you will not drop the ball. These are concentration issues players who are guaranteed $10.25 million shouldn't be making.

This was supposed to be Derek Cox's strength. His technique isn't sound while playing press, either. Here's a quick drill of Nick Saban coached DB's playing press/mirror man. What most don't know, is when you're still playing this "mirror" technique, you are supposed to get your hands on the receiver to reroute him, just not until the receiver has released up field.

Notice the fast feet and the eyes of the corner. In my opinion, the eyes of players is one of the most under coached aspects. Watch their heads as they mirror the defender. No contact is made until the receiver actually releases up the field, which is great for balance and not false stepping forward.

I'll show you two examples. The first is Derek Cox vs. Riley Cooper earlier this season.

Poor technique has been the case for Cox all season, and since week 2, it hasn't gotten any better. 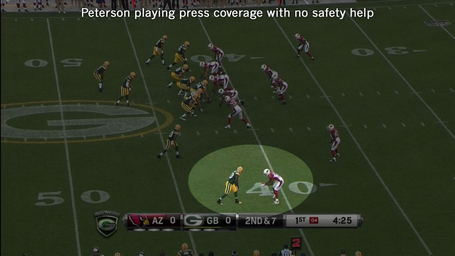 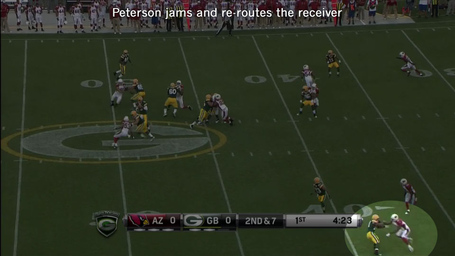 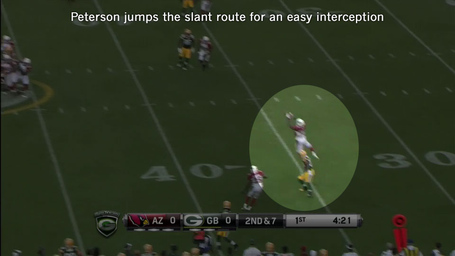 Fans have complained throughout the season how Cox is being used improperly, by playing off coverage. They have every reason to be upset.

To excel in off man you need to be able to diagnose plays quickly, transition in and out of your break with proper balance but also with good body control, in case of a double move. Does any of this sound like Cox?

Look no further than the Colts game.

In this next example, I'm not sure where he learned this technique. Knowing the down and distance, there's no way he should be bailing like this.

Again, this is not because he lacks the physical traits. Cox is simply not aware of the down and distance, or route recognition.

Now let's see how one of the greats do it. Probably my favorite corner in the league, Leon Hall.

No corner is going to have a perfect game. You're going to give up catches. The difference is when you give up these catches, you have to make the tackle. This is the difference between a 6 yard gain and a 16 yard gain.

Cox had 15 missed tackles last year, which was alarmingly high, but one might have thought, "Okay, just a bad year." 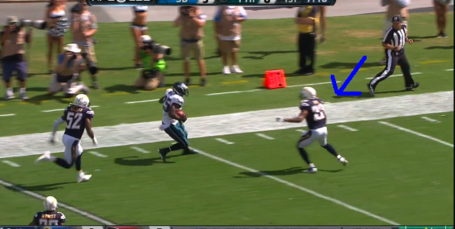 Cox had the receiver pinned against the sideline, still found a way to miss the tackle.

There were more, some too painful to show. Tackling is all about effort & form. Cox severely lacks both of these.

When you watch him, you can see that he does have the physical traits. The numbers he put up at his pro day were ridiculous. But as the rest of that report says, his weaknesses haven't gotten any better.

The best corners play with confidence, that's where Cox is really lacking at. Why are the best corners confident? It's not only in themselves, but it's because they're confident that they know what's coming. This is from great film study.

If Cox is to turn his play around, he'll need to prepare better. He's constantly guessing when he's out there, and you can see it. NFL players shouldn't be making the same mistakes week after week. This is leading to him getting beat. It applies in life, and it applies here, the 5 P's.