The BFTB OC Meetup was a Success

A bunch of readers, writers, commenters and lurkers from BFTB got together to watch a game together, and it was the best game of the season for the San Diego Chargers. Coincidence?

Share All sharing options for: The BFTB OC Meetup was a Success

The first ever BFTB Meetup in Orange County went off without a hitch yesterday, and I can't remember the last time i had that much fun watching a football game.

We spent most of the four quarters eating food (my first, and certainly not my last, time at Slater's 50/50), drinking beer (and/or Bacon Marys), and screaming at the televisions. When the final whistle blew, those that were left standing decided it might be a good idea to get a picture together. 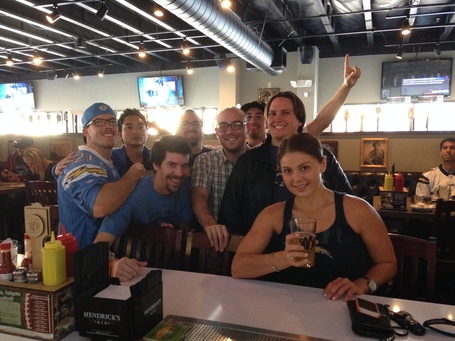 That's the group, minus those at the back table that were too busy talking about non-football things to care about joining our silly photo. Their loss, because they also missed out on... 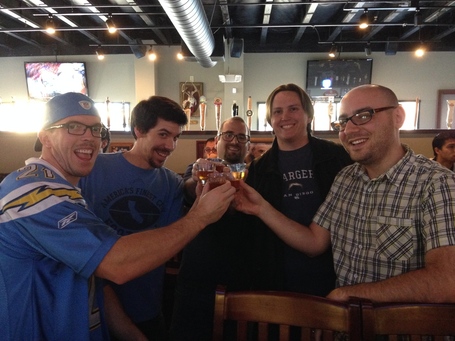 Celebratory shots! Fireball, of course. Just the way Philip Rivers would've celebrated, I'm sure. The shots were purchased by Chris, whom everyone should follow on Twitter and who won the contest for best Chargers shirt at the meetup. 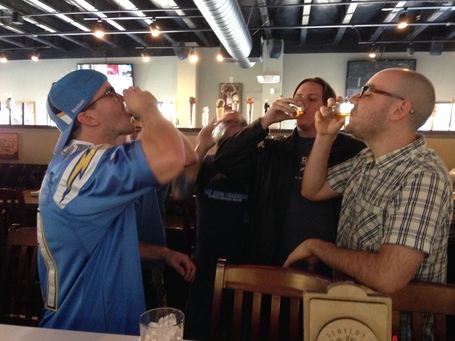 I'll leave those that were there to identify themselves in the pictures, if they want (including those lurkers that showed up and said they would be creating accounts to comment on the site).

I will rank the Seyi Ajirotutu TD, and the ensuing melee in the middle of the bar (when our group and the group of Chargers fans behind us joined in what can only be described as "a dogpile of screaming joy"), as one of the Top 3 sports moments I have ever experienced, and I've been to a World Series game!

If you missed out on this meetup, well....there will be more. Probably at the same place. Slater's food was fantastic, their bartenders were great and the TVs were lovely. None of which could match up to the quality of people that showed up though. I am always pleasantly surprised to meet our readers, to hear their story and find out that many of them are decent human beings away from the comments section of BFTB. Thanks for coming out, those that did.