Going play-by-play on the San Diego Chargers' game-winning drive over the Kansas City Chiefs at Arrowhead Stadium. The Chargers won by a score of 41-38 after a touchdown pass from Philip Rivers to Seyi Ajirotutu.

Share All sharing options for: A look back at the San Diego Chargers' game-winning drive against the Kansas City Chiefs

It seems like every week Philip Rivers has had to play lights out for the San Diego Chargers to have a chance to win. Again, this was the case on Sunday. Let's take a look back at the 7 play drive that won the Chargers the game. 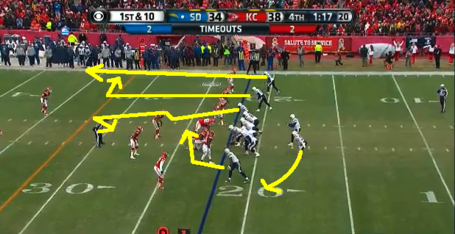 Here's the pre-snap look. It's a great play, designed to get Antonio Gates open. Seyi Ajirotutu is lined up on the bottom of the screen, and he runs a drag route. Antonio Gates is the #3 receiver on the top of the screen, he runs straight towards the linebacker, creating a pick for Ajirotutu, then sits down in the zone behind the vacated linebacker. To the top of the screen Vincent Brown runs a go route, and in the slot Keenan Allen runs an out route to the 1st down marker.

The game was inches from being over on this play. 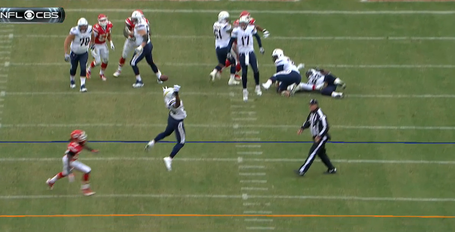 Rivers missed Gates high while scrambling away from pressure, and the ball bounced right into the safeties hands. Fortunately, he dropped it.

This next play was designed to attack the middle of the field at different levels. Whisenhunt calls this play expecting man coverage. 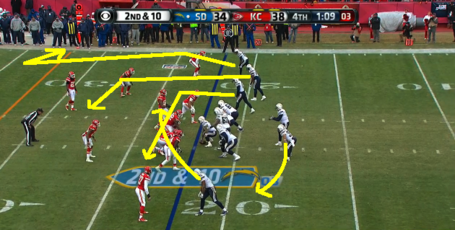 Ajirotutu, to the bottom of the screen, and Allen run short crossing routes. Gates is the #2 receiver to the top of the screen. He runs a 5-step slant and Brown runs a deep comeback.

Rivers felt phantom pressure and left the pocket a little early after he saw that the crossing routes were covered. The routes weren't there because the Chiefs were in a combo coverage, a Cover 6 (where the corner on the bottom of the screen is playing short as if it's a cover 2, and the safety directly behind him has half of the field. The safety and corner opposite then are responsible for a quarter of the field).

Even as I'm screaming at my TV for Rivers not to roll out, he puts the ball where it needs to be for a completion. Unfortunately, the field conditions got the best of Vincent Brown.

To the top of the screen, Brown needs to know the conditions and have his feet underneath him. He makes the cut with his feet outside of his body and falls.

Love the play design here. Trips to the top of the screen with Brown, Royal, & Allen. Isolate Gates to the bottom of the screen. 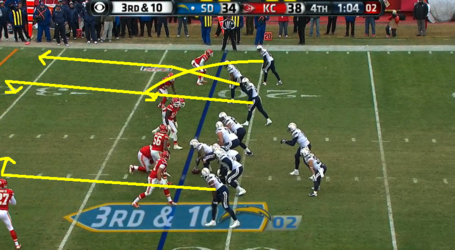 The Chiefs ran an equally impressive play. Not a blitz, because they only brought 4, but they brought slot corner Brandon Flowers as well as safety Eric Berry. Berry ran right around Jeromey Clary and hit Rivers as he threw it.

Gates, running at about 2 mph, is still able to create separation and gets a huge 1st down to keep the drive alive. You can watch the play here.

The Chargers called a timeout after the play.

The Chargers had been running these swing routes out of the backfield with Woodhead every play. Whisenhunt must have seen something the play before to realize that now this is an option.

Gates clears out his side, and the corner Sean Smith is about 10 yards off so Rivers checks it down to Woodhead. This was my favorite play of this series, by far. 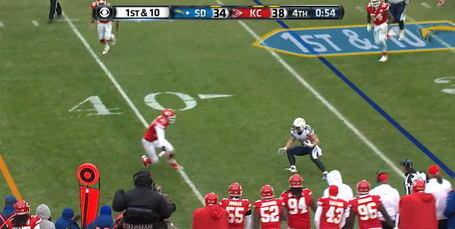 Woodhead fakes like he's running out of bounds, gets Smith to over commit, then plants hard back inside to gain 19 yards. This is why you hear everyone rave about this guy. Such a smart play. Even if he had been tackled in bounds, I would still love the play. You can watch him shake Smith here.

This next play is more about Rivers recognizing the coverage quickly.

As soon as Rivers sees the corner to the bottom of the screen run with TuTu, he realizes that no one is going to guard Woodhead. Woodhead shows off his speed and acceleration here to get 14 yards, and get out of bounds. You can watch him turn and get upfield here with no wasted movements.

The next play was pass interference on Eric Berry, who still can't seem to figure out how to guard Gates.

There's rules in place that don't allow you to mug the receiver out of his break.

Eric Berry is going to be so happy the day Antonio Gates retires.

Berry makes up for it on the next play. This one is on Rivers. He was sacked at 4.9 seconds. He's has to have that internal clock ticking and he needs to just throw it away. This was the same pressure the Chiefs brought back on Play #3, they just brought it from the left instead. 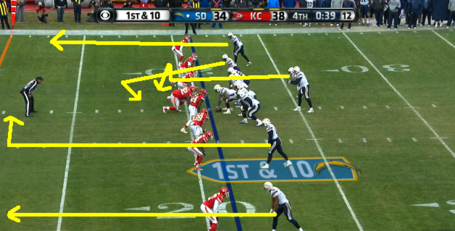 Rivers initial look was at TuTu to the bottom of the screen, couldn't tell without the All-22 look whether it was a deep curl, or he was running deep. Rivers came off of him pretty quickly, and again felt phantom pressure left the pocket when he didn't need to.

Luckily, this didn't turn into a strip sack. 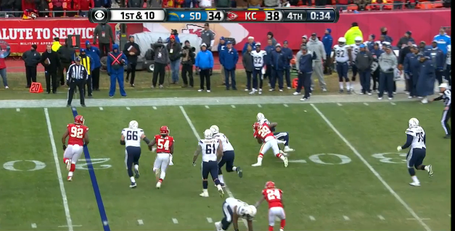 San Diego called its final timeout after this sack.

Again, Whisenhunt must have really seen something to come out in this 3X1 set, with Gates and Woodhead isolated on the same side. I'd like to this this more going forward. 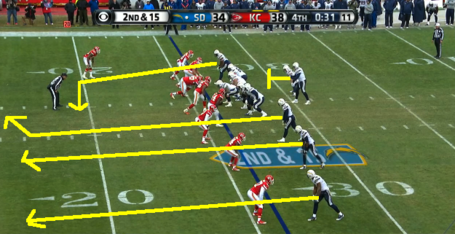 Chiefs come out in a 2-man look. Woodhead stays in to block in case of any extra blitzers. Brown does a good job of holding the safety as long as he can on his vertical route, but this play is really all Rivers. 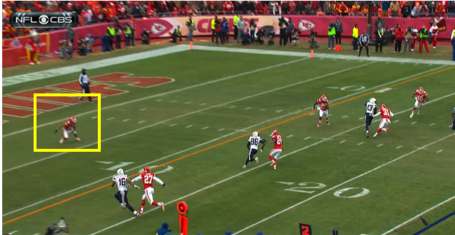 The safety is caught in no man's land after he takes a few false steps towards Brown. Tutu has a step on Sean Smith, and Rivers makes a classic "bucket throw" for the win. You can watch the throw that kept the Chargers season alive here.

Easily the most exciting game of the year, we should be able to write off on our taxes the emotional roller coasters that the Chargers put us through week to week. This is definitely a game we'll all remember.