Share All sharing options for: The AFC Playoff Picture: Week 12

After the heartbreaking loss Sunday in Miami, and all the dust from the other week 11 games had settled, the San Diego Chargers' path to the playoffs is like standing at the base of a mountain while staring up at its peak: "I'm supposed to climb that." Before we go in depth on the Chargers' bleak outlook, however, let's first establish what we know about the teams that are likely to make the 2013-2014 AFC Playoffs.

It's really, really likely that these five teams reach the playoffs:

All of those teams are at least two games clear of a challenge to their playoff berth, with just six weeks remaining.

Here's a look at those teams, along with their remaining opponents.

There are some interesting week 12 story lines at these teams jostle for a bye week. New England's loss in Carolina last week dropped them to the three seed, while Denver leap-frogged Kansas City by virtue of their head-to-head victory in week 11.

Now, Denver travels to New England in what could go a long way in determining which teams get byes. A win for Denver would give them a huge lift in their effort, while helping Indianapolis distance themselves from New England. While this happens, Cincinnati enjoys a bye week after their victory over Cleveland last week gave them a 2.5 game lead over several teams in their division. Cincinnati could end up tied with both New England and Indianapolis for the two slot should they both fall, though Indianapolis would still possess the best conference record.

While the Chargers aren't actually eliminated from the AFC West, it's virtually a guarantee that (at 4-6) their playoff path will have to come via the sixth slot in the AFC.

The fight for the six seed

Here are the "contenders" for that sixth slot, along with their remaining games:

The race got really, really interesting last week when the Jets fell in Buffalo, and several three win teams - Oakland and Pittsburgh - jumped into the picture with victories. All other four win teams, with the exception of the Miami/San Diego winner, lost, further bunching up the race. As it currently stands, the Chargers are thirteenth in the AFC.

Recall that the first few tie-breakers for the Wild Card slot are as follows, per NFL.com:

Here's the head-to-head table, helping everyone visualize where the Chargers stand in relation to the rest of the AFC race in the important head-to-head tiebreaker: 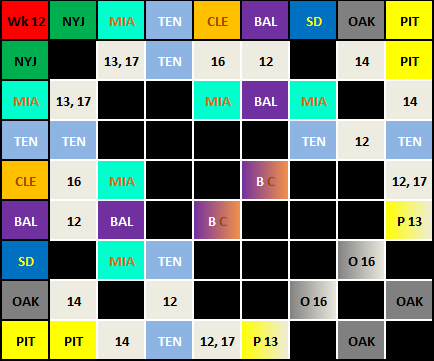 Remember, though, that a tie between more than two teams requires a head-to-head sweep in order for it to be used as a tie-breaker. So perhaps the Chargers can forge their way into a tie with a team they haven't played yet this season, who also isn't swept by the other tied team(s), in order to move on to the next tie-breaker.

And that next tie-breaker is...

The San Diego Chargers are in awful shape in this department, too, as they have the least current conference victories and the least possible conference victories. As far as the rest of the field is concerned, the only other team in poor shape is the New York Jets. I say this for two reasons: they are tied with the Chargers with the least conference wins and, since they currently have a one game lead in the Wild Card, if another team catches the Jets it implies that they lost another game...probably a conference one.

While the Chargers could theoretically end up in a tie with a handful of teams in this category, it's not very realistic. With two games against Kansas City, a game in Denver, and a game against Cincinnati left on the docket, if the Chargers are to end up in a Wild Card tie, it's more likely that it'll come through a set of victories that includes a win over the New York Giants...further setting back the team in the in-conference wins tie-breaker.

However, should the Chargers pull off a few upsets in Kansas City or Denver, the next tie-breaker would be... 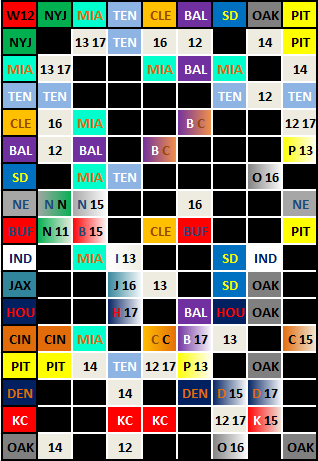 Here, the Chargers are also struggling, but have some outs:

For the head-to-head common games tie-breakers:

The Chargers cannot enter a three-way tie-breaker based on common games, as no two teams share four games simultaneously with the Chargers.

The outlook for the Chargers is not - I repeat, not - good. Besides having a tough schedule and many teams they need to leap-frog, the tie-breaking procedures are about as bad as they can get for the Chargers, too. Because of that, the Chargers probably need to win all of their games to make the playoffs. If they lose just one and they tie the correct team for the tiebreaker, they might still squeak in...maybe. Regardless, a Chargers postseason run basically requires a win this week in Kansas City. If that doesn't happen, the Chargers won't be included on any of these graphics next week.