The more things change, the more they stay the same. The Chargers, being the anti-Patriots, found a way to make the handful of mistakes they absolutely had to make to lose. As a result, the Chargers' 2013 season is officially on life support after losing a must-win game against a Miami Dolphins team that seemed to be on the edge of implosion.

On with the grades:

Philip Rivers' numbers for this game would seem to indicate a better game than what I watched on Sunday. Rivers finished with 22 completions on 34 attempts (64.7%) for 298 yards (8.76 YPA), with 1 TD and 1 INT. As has been the case the last couple of weeks, Rivers did a little too much of locking in on TE Antonio Gates, and generally kept trying to force the ball down the field instead of taking what the defense gave him - which seemed to be the case with the INT intended for WR Vincent Brown. Regrettably, Rivers did not target WR Keenan Allen until halfway through the 2nd quarter. And a QB with Rivers' experience cannot incur illegal forward pass penalties inside the red zone.

Running Back: B plus

Hands down, this was Ryan Mathews' best game of the season. Mathews had 19 carries for 126 yards (6.6 YPC) with a additional 17 yards on 2 receptions (2 targets). His day included a career long rush of 51 yards in the 3rd quarter, but disappointingly, he only had 2 carries inside the red zone (one of which went for 7 yards and a 1st down). He did have some struggles in pass protection. RB Danny Woodhead was limited in this game, with only 2 catches for 16 yards (2 targets) and 5 carries for 21 yards (4.2 YPC). RB Ronnie Brown and FB Le'Ron McClain combined for only 6 snaps, and did nothing of consequence.

It's a shame that WR Keenan Allen wasn't really involved except for 1 series in the 3rd quarter. He finished with 3 catches for 45 yards (6 targets), and one unfortunate taunting penalty, before getting hurt. On the other side, WR Vincent Brown continues to struggle, with only 2 catches for 17 yards on 6 targets, and likely contributing to another Rivers INT by breaking off his route after the ball was thrown, and it seems to me the attempt by the staff to get Brown involved needs to end. WR Eddie Royal had a limited impact with 2 catches for 20 yards (3 targets), and WR Seyi Ajirotutu made a couple of nice catches late for 38 yards.

Statistically, the TEs had a nice game. Ladarius Green finally got some more opportunities from the coaching staff, and ended up with 81 yards on 4 catches (5 targets). Antonio Gates finished with 4 catches for 52 yards and 1 TD (6 targets), but had a personal foul for illegal hands to the face. John Phillips even got a play, with a reception for 13 yards. In run blocking, Green was the best of the group, but was OK overall.

Offensive Line: B minus

Honestly, this group held up pretty well until the 4th quarter. LT DJ Fluker was strong in the running game against DE Olivier Vernon, and held up pretty well against Vernon and rookie DE Dion Jordan until giving up a killer 4th quarter sack on the penultimate drive, which likely caused a punt instead of a 4th down attempt or FG attempt. LG Johnnie Troutman had a strong game against DE Jared Odrick until late, allowing a sack early in the 4th quarter.

In the middle, C Nick Hardwick and RG Chad Rinehart were solid against DTs Paul Soliai and Randy Starks, although Rinehart got beat a couple of times on running plays to the right. At RT, Jeromey Clary was put in a bad matchup against DE Cameron Wake. He held up decently in pass protection, but did allow a sack on the final drive, and got beat by Wake's speed on more than a few running plays.

Never mind that DEs Lawrence Guy and Sean Lissemore outplayed Corey Liuget and Kendall Reyes, again. This occurred in the one game where Liuget and Reyes absolutely should have been good - going against a Dolphins offensive line which was short 3 starters (and hadn't been good to begin with). Instead, the Dolphins ran for a team total of 104 yards on 19 carries, with Liuget and Reyes consistently getting beaten by LG Sam Brenner (a rookie reserve C!) and RT Tyson Clabo. Lissemore did record a sack against Brenner for the group's biggest highlight.

DT Cam Thomas made limited headway in his limited playing time against reserve Miami C Nate Garner (normally a G). There was also very little pressure created by either player in the passing game. The only impact play made by the defensive line was Liuget's late hit on Dolphins QB Ryan Tannehill, which wiped out a Miami turnover and cost the Chargers 7 points (in a 4 point loss). Just a brutal, brutal effort.

The only bright element in this group was OLB Thomas Keiser notching a sack against LT Bryant McKinnie, and OLB Reggie Walker getting a sack thanks to Tannehill running out of bounds as Walker made contact. Otherwise, this group was an utter disaster. For most of the game, neither Walker nor Keiser got much pressure from the outside. Additionally, Keiser showed some serious lack of discipline, jumping offsides 3 times during the first half - and also chasing the running back and ignoring the ball on a Tannehill keeper.

As for the ILBs, neither player performed well. Both Donald Butler and Manti Te'o were missing tackles, although Butler was at least serviceable in pass coverage. Te'o had a couple of nice plays, but neither were impactful enough to blunt the severe problems his bad plays caused. Te'o was one half of the Chargers' terrible play against TE Charles Clay, repeatedly getting beat in coverage and missing crucial tackles that would have prevented long gains. Te'o will need a lot of work this offseason in getting his reads correct, because he's simply not athletic or fast enough to recover from a mistake at this point.

FS Eric Weddle had a sensational game, collecting a team high 7 tackles, 1 sack, and a crucial pass defense to stop a MIA drive in the 4th quarter and force a FG attempt. In limited action, CB Johnny Patrick had an INT on a devious zone defense in the 1st quarter, although he was beat in the slot a couple of times by WR Rishard Matthews.

CB Derek Cox was merely bad instead of scorched-Earth terrible, with a couple of pass defenses against WR Brian Hartline, although he missed a few crucial tackles and dropped an early opportunity for a pick 6. CB Shareece Wright was in a tough assignment against WR Mike Wallace, and allowed 4 receptions, and should be thanking his lucky stars that Tannehill is not a strong deep passer.

SS Marcus Gilchrist, regrettably, was the other half of the bad play against Clay, repeatedly getting beat in coverage and getting trucked by Clay on what turned out to be a game winning 39 yard TD reception.

P Mike Scifres had yet another strong game, with 4 punts for a 38.5 yd net average, and produced 2 kicks inside the 20, and 1 touchback - which was almost downed inside the 5. PK Nick Novak also had a strong game, with FGs of 27, 29, and 50 yards. On kickoffs, Novak had his best game of the season, producing 3 touchbacks on 5 opportunities. As has been the case the last several weeks, the coverage teams were strong on both punts and kick returns. On punt returns, Keenan Allen had a 21 yd. return, a 13 yd. return, and Eddie Royal even had one above average return for 12 yds.

In terms of game management, Mike McCoy gave us one discernible improvement. He smartly used his timeouts prior to the 2 minute warning in the 4th quarter, as opposed to waiting past the 2 minute warning last week (although he did botch the end of the 1st half). As far as 4th down is concerned, the biggest issue I had was with McCoy's choosing to punt on 4th and 12 from the MIA 36 with 4:07 remaining. However, this does not bother me as much as it did Sunday. I'd have preferred McCoy attempt a long FG or go for it trailing by 4 - but the presence of all 3 timeouts and the time remaining makes his decision somewhat less egregious.

For me, OC Ken Whisenhunt was a mixed bag in this game. I'm already not fond of the slow developing play action passing game, which seems to make Rivers a bit more jittery in the pocket - with good reason. And it's also time to make Allen the center of the outside passing game, and let Brown be a tertiary option. However, I did like Whiz using a lot of 2 TE sets, and calling specific plays for Ladarius Green. And the LSU toss was a nice new wrinkle in the running game.

On defense, DC John Pagano had a couple of great calls against a suspect offensive line (the Weddle blitz), and the young QB (the deceptive zone which led to the Patrick INT). So... where was that stuff for the entire game? Also, you can sit on the Dolphins short and intermediate routes because a) no one but Wallace can get deep, and b) Tannehill doesn't throw a great deep ball. Why not attack a (putting it mildly) shaky offensive line, and force Tannehill to beat you down the field? Instead, there was tons of off coverage and 4 man rushes, which allowed lots of underneath completions - I'm particularly nauseated by Hartline's repeated 10 yard out routes against Cox.

One Play I Really Liked: 35 Yard Pass to Ladarius Green 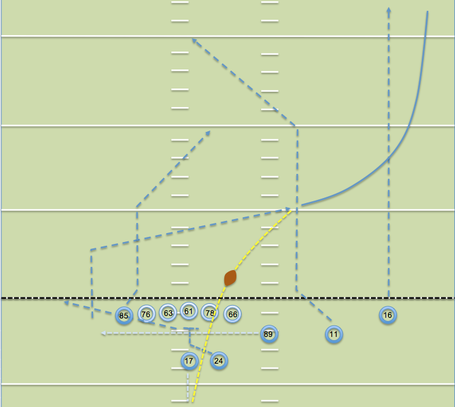 Watching the Chargers try to figure out how to not lose a game within the friendly confines of a raucous Arrowhead Stadium, in an environment eerily reminiscent of the late 80s-early 90s Marty Schottenheimer coached Chiefs (mediocre offense, strong defense).