While all the focus is elsewhere, Ryan Mathews is quietly having the best season of his career, and this past Sunday only reinforced that opinion.

As the focus this week is on whether Mike McCoy will ever be the coach we all hoped for, one thing is flying under the radar: Despite the fact that the stats say otherwise, Ryan Mathews is arguably having his best season as a pro. Don't look now, but he may be finally putting it all together.

As they say, better late than never, right?

Eric Weddle was able to keep the opening drive for the Chargers alive by fighting for some tough yards on a fake punt. With a fresh set of downs, Philip Rivers wasted no time in connecting with Keenan Allen for 18 yards on the very next play, and then Mathews decided it was time to take off to the races. 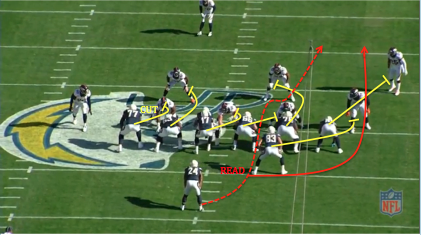 King Dunlap cuts the defensive end to seal off the backside pursuit. They're not concerned about the outside linebacker on that side (which just so happens to be Shaun Phillips), because he's likely be caught up in the "wash" along the line of scrimmage anyway (which, you'll notice in a minute, happened here). Nick Hardwick tries to seal the nose tackle to the inside while Jeromey Clary pushes the play-side defensive end to the sideline. This is the hole that Mathews presses initially. Although Clary does a good job on his guy, Hardwick isn't able to seal the nose, and as a result, the hole just isn't there. However, Mathews wastes no time in bouncing the play to the outside for a big gain.

As an aside, I'm a fan of any play that ends up with Fluker running full speed down the field. On this play, he drives his guy for almost 20 yards. Can we please have more of that?

Let's just ignore the clear-as-day holding penalty on John Phillips, okay? I'll just say that it's not easy to block Von Miller, regardless of who you are. What happens after Mathews is clear of the line of scrimmage is the important part of this play. First and foremost, he makes a guy miss at the second level(!), something that clearly doesn't come naturally to him. He does a great job here, though, of playing the angles and making the DB pay for taking a bad one against him. You don't have to break ankles like LeSean McCoy to win in the open field. Angles. Play the angles.

Oh, and then to top it all off, he recognizes all the open field to his left and cuts the run back for an extra 20 yards. Not too shabby for a guy that was criticized by his head coach less than a year ago for his poor vision and decision making.

How does my stiff arm taste?

After being toasted on a Julius Thomas catch and run early in the game, the Chargers defense recovered and only allowed one first down over the course of the next two series. After a three-and-out punt by the Broncos, the Chargers put the ball in the hands of their talented running back again - and this time there wasn't a holding penalty to bail the Broncos out. 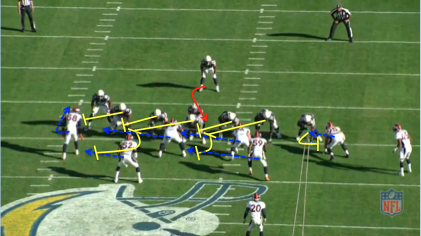 This is a designed cutback, boys and girls. The initial action is going to make things pretty easy from a blocking perspective by getting the defenders flowing away from what actually is the play-side. All the offensive line has to do is take them where they want to go. Now, there's also some pretty important zone blocking things going on here, but for our purposes just note that Hardwick and Dunlap are going to help their teammate next to them before sliding off to seal off the linebackers. The key to this play, however, is Antonio Gates. He had to win by sealing his guy to the outside, otherwise Mathews likely wouldn't have gotten very far at all.

You'd probably be able to tell Mathews grew up idolizing LT even if he never told you so. Oh, why you ask? Because of that stiff arm. He'll never be any where close to the runner LaDainian Tomlinson was, but that stiff arm isn't far off. And the best part is that he even made sure to dish out a little bonus punishment on his way out of bounds. I can pretty much guarantee that despite the fact that he often can't make someone miss to save his life, no DB is happy to be the one faced with getting Mathews to the ground.

Okay, I know what you're probably saying at this point.

Sure, the fumbles and injuries have been huge issues before, but they aren't right now. Maybe you're right that they'll come back, but maybe they won't. Either way, I'm just going to sit back and enjoy watching a kid play the best football of his career, instead of always waiting for his next failure.

I suggest you do the same.