The San Diego Chargers will win against the Miami Dolphins

Each week, we give San Diego Chargers three reasons to be optimistic about the team's chances in their upcoming game. This week, the Chargers travel to Miami to take on the 4-5 Dolphins.

Share All sharing options for: The San Diego Chargers will win against the Miami Dolphins

The Miami Dolphins have lost five of their last six games, and their only win came off of a safety in overtime. They've become the posterchild of a dysfunctional NFL team after Jonathan Martin left the team and Richie Incognito was suspended by the team for bullying. They're currently under investigation by the NFLPA.

This is not a good team anymore. They have enough talent to put together a good season, but not enough that they can consistently win games despite media controversies and a head coach that is constantly under attack. It will be difficult for them to focus 100% on football, which makes them very weak.

Check out these game-by-game ratings from Pro Football Focus for Philip Rivers this year: 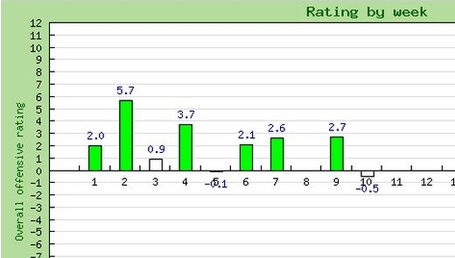 Those average-to-poor games were against the Titans, Raiders and the Broncos last week. While those are the only 4-3 defenses he has faced this year besides the Jaguars, and he's facing another 4-3 defense this weekend, IGNORE THAT. I want to point out the fact that Philip hasn't had back-to-back bad games this year, and this week is no place to start!

I know, I say this every week. The San Diego Chargers offense is really good. It's the 3rd best offense in the league, and last week showed signs that they've start to figure out the red zone offense as well (Ryan Mathews' rushing TD and Danny Woodhead's receiving TD, specifically).

The Chargers are averaging 23.5 points per game this season. The Dolphins record this year against opponents that score more than 23 points against them? 0-3.

While the Dolphins have a strong pass rush, the rest of their defense is vulnerable. If the Chargers can get the ball out of Philip Rivers' hands quickly, they should be able to score enough points that Ryan Tannehill and the Dolphins offense won't be able to catch up. Then, it'll be time for Ryan Mathews to burn some clock.