San Diego Chargers Game Plan: How to Stop the Dolphins

Going through the Dolphins game tape to find out what the San Diego Chargers need to do on Sunday to stop the Miami offense and beat the Miami defense.

Share All sharing options for: San Diego Chargers Game Plan: How to Stop the Dolphins

Through the first half of the season I wrote What to expect from other teams offenses. I want to change it up over the second half of the season. To give you an idea of what to expect, there will be some game day goals sprinkled in, but mostly going over the opposing teams strengths and weaknesses and how to attack them.

The Miami Dolphins are 1-3 over the last month, but it's not because of their defense. The Phins are allowing 4.3 yards per play in the past 4 games. To put that into perspective, the league average is about 5.2 yards per play. The defense does a good job of limiting explosive plays. They've given up the 9th fewest in the NFL. This is a good defense, and it starts up front.

Not to go on a hypothetical tangent, but in the offseason, I joined commenters Buck, & Ryan to do a mock draft for the Chargers. We traded our 7th round pick for DT Paul Soliai. He's been very good this year at controlling the line of scrimmage. If you're into PFF, he's the 11th highest rated DT. Think he could help this team now?

Lined up next to him is DT Randy Starks, who is playing as well as anyone else at his position. Though he only has 3 sacks, he's constantly in the other teams' backfield. Jared Odrick plays predominately on passing downs, and has been equally disruptive. Think of how Kendall Reyes was playing at the end of last year, that's how good Odrick has looked in 2013.

On the outside, Oliver Vernon is a strong, powerful player, but I do think whoever plays left tackle, whether King Dunlap or D.J. Fluker, should be able to match-up well against him.

The problem is on the other side, with Cameron Wake. 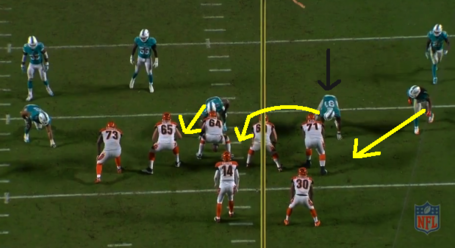 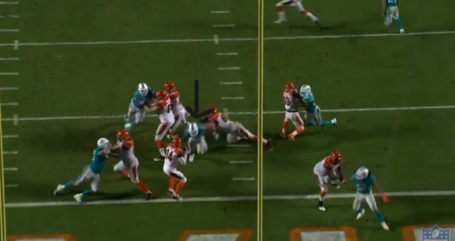 Wake beat the Cincinnati Bengals guard with quickness and power for the game-ending sack last week.

Wake is a top 5 pass rusher in the NFL, period. The quick passing game will need to be featured on Sunday.

As well as Miami's defensive line has played this year, the same cannot be said for the linebackers. Miami spent quite a bit of money on free agents Dannell Ellerbe and Philip Wheeler. They haven't performed well this year.

Ellerbe can't be over 235 pounds, and it shows at times. As far as coverage, Wheeler has struggled mightily against better tight ends this year. San Diego has a pair of tight ends. If you listen to this week's podcast, we actually think Antonio Gates and Ladarius Green should start splitting snaps, at least. 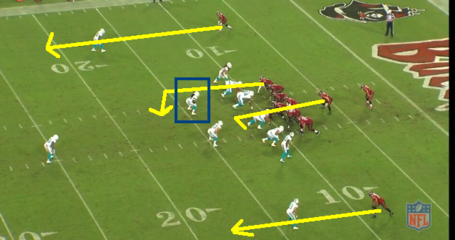 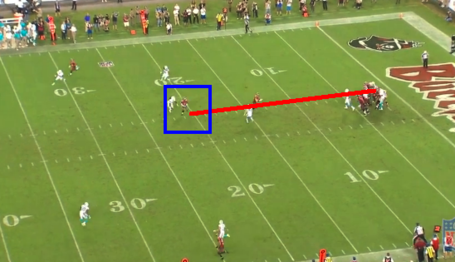 The one area Tom Telesco messed up this offseason? Signing Derek Cox over Brent Grimes. Grimes is known as a shutdown corner and has continued his high level of play this year. Yes, I know he's coming off a season-ending injury, but was there really any doubt he'd return to form? Grimes is likely the best corner that this team has seen all year. A great athlete with great ball skills. I'd shy away from throwing his way. 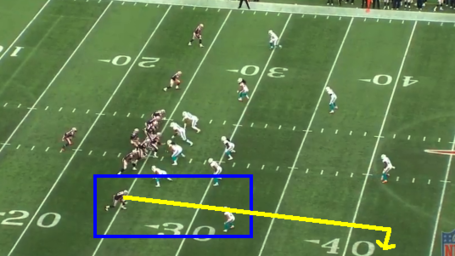 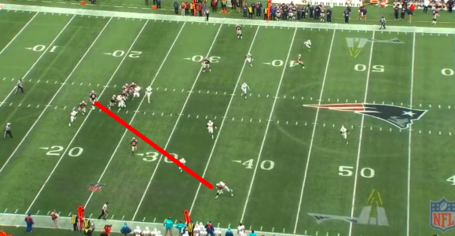 I chose this play because Vincent Brown runs this timing out route quite a bit. If Grimes doesn't respect your speed, he'll sit on the route and break it up, like he did here.

Due to injury/play, the other corner back position has been rotated between Dimitri Patterson, and Nolan Carroll. Jimmy Wilson is the slot corner, and the former 7th round pick can be taken advantage of. Miami's corners aren't very big, so the Chargers to have the advantage in that regard. That's just another reason I would love to see Green get no less than 30 snaps this week.

Those are the 3 biggest threats in this offense. Ken Whisenhunt needs to do a better job of featuring these players.

They needs to run the ball more consistently, and not just in the first half. In the podcast, I said that I felt the Chargers think if they don't feed Danny Woodhead, they feel like the offense will stall. You can get Ryan Mathews 20 carries, while still working Woodhead in the offense.

Miami's offense is tough to figure out. It doesn't seem like they really have a plan. I think they rely too heavy on Ryan Tannehill to make plays. That's not a terrible idea, because Tannehill is very good. Another mobile quarterback for the Chargers to try and defend. They've struggled altogether, but they've really struggled against mobile quarterbacks.

Tannehill has developed quicker than expected. He's not just extending plays with his feet, but he's making plenty of "wow" throws from the pocket. If you take away the names on the back of the jersey, you'd have a tough time saying he hasn't been one of the top 5-7 QBs in the NFL this year. If he had better weapons, I think he'd be respected a lot more. 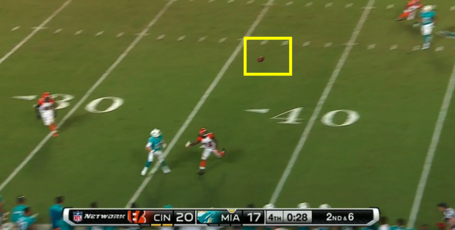 Here's a look at that throw. Tannehill is very good with his ball placement. Still inconsistent at times, but he can make every throw and is certainly the type of player to give the Chargers defense problems.

Miami has one of the more explosive running backs in the NFL in Lamar Miller, but for some reason they have no idea how to use him. I'd worry as a fan if he were able to get to the edge. He's what we call an "angle breaker."

Instead Miami continues to give away carries to back up running back Daniel Thomas, who is averaging 3.3 yards per carry. He's not very explosive. He does break tackles, but he's not overly impressive as a back.

Miami likes to get outside and run left. 64% of their runs are to the left this year.

Mike Wallace was supposed to be the savior for this offense. His effort has been lackadaisical to this point. He's catching 52% of the balls thrown his way. Compare that to Vincent Brown (66.7%) and Keenan Allen (76%!) and you can tell there's something wrong there. However, he is still a deep threat and is one of the fastest players in the NFL.

Brian Hartline is the definition of a possession receiver. Of his 67 targets, 7 have been targeted over 20 yards. With proper film study, the corners on this team should be sitting on all of his routes.

It's hard to ignore what the slot receiver Rishard Matthews did on Monday night football. 11 catches, 120 yards, and 2 TDs. Tannehill looked his way often and seemed comfortable throwing his way. Matthews isn't a great route runner, or overly fast, but he just gets open. He also has very strong hands and catches the ball well in traffic.

Tannehill relies on athletic tight end Charles Clay quite a bit, as well. He's a solid player, a good athlete who can run, but I wouldn't primarily use (waste) Eric Weddle on him if I were John Pagano. Clay is used mostly over the intermediate part of the field. I would like to see either Donald Butler or Marcus Gilchrist guarding him.

Pressed into duty due to the whole Incognito/Martin fiasco, left guard Nate Garner hasn't played very well the last 2 weeks. I can finally, confidently, say that this is the best match-up for Corey Liuget this year. I'm expecting a big game from him. At the other guard, John Jerry is solid, but not spectacular. In the middle, is one of the best centers in the game in Mike Pouncey. The leader of the offensive line should potentially give Cam Thomas & Kendall Reyes more problems.

Stunts seem to throw off Garner. He's slow to react, and as a result, gives up pressure, and even sacks at times.

At right tackle, Tyson Clabo really struggled a few weeks back against Mario Williams. The Chargers don't have a Mario Williams. He does struggle against speed rushers, but the Chargers don't even have one of those. As always, we should be worried  about the pass rush. Left tackle Bryant McKinnie hasn't quite on the team yet, and has looked okay the last few games. He's keeping Tannehill clean, but not really a factor in the run game.

The goal should be to make the Dolphins one dimensional. Take away the run, and make these receivers get open consistently. The Chargers should play a lot of Cover 1, where the corners can just play, instead of think. Let them know that they have help over the top and in the middle (where there would be a robber helping), so they can sit on routes and protect the sideline.

When I say "collapse and contain" I mean bring pressure up the middle, collapse the pocket, while making sure your edge rushers don't get out of their lanes and allow Tannehill to scramble and run all over this defense.

We'll revisit this next week to see how the team did with these goals.